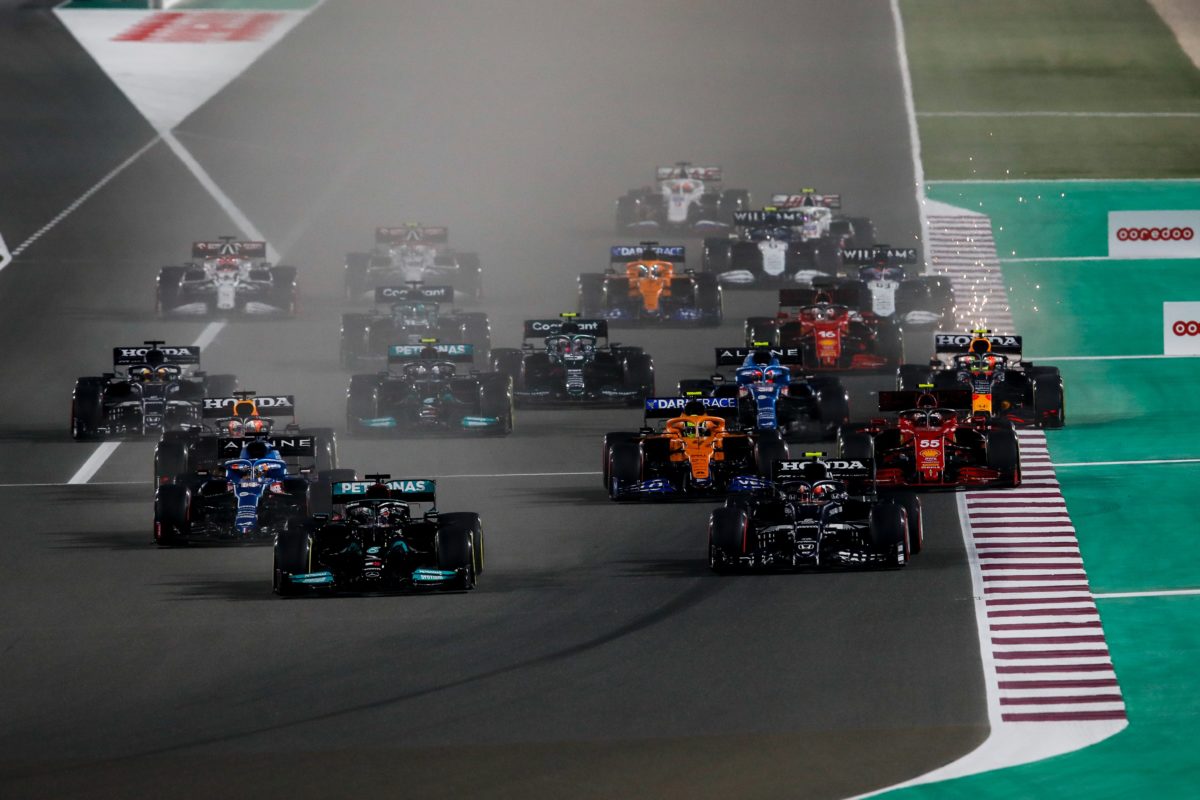 An unchallenged Lewis Hamilton has eased to victory in the Formula 1 Qatar Grand Prix ahead of Max Verstappen.

Starting from pole, Hamilton led every lap of the race in a commanding performance.

It was a case of damage limitation for Verstappen, who’d taken a grid penalty after qualifying to start seventh as he rose to second.

Fernando Alonso claimed the 98th podium of his career after a daring strategic call after what was a starring performance.

Hamilton maintained his pole position advantage to hold the lead into the first corner over Pierre Gasly, who fell behind Fernando Alonso midway around the opening lap.

Verstappen started well, rising quickly to fourth from seventh on the grid, while Bottas fell from sixth to 11th.

At the end of the opening lap, Hamilton held a 1.8s lead over Alonso, with Verstappen 3.5s down on the leader in fourth.

Exiting the final corner on Lap 3, Gasly ran wide and allowed Verstappen to make an easy pass and move up to third.

Aided by DRS next time by, the Dutchman put manners on Alonso as they powered down the pit straight, easily completing the move into the first corner.

It left Verstappen second, but already 4.1s down on Hamilton out front.

On Lap 5, the Red Bull driver claimed the fastest lap, closing the gap to 3.7s to his world championship rival in the process.

Hamilton responded, easing his advantage back out to five seconds.

In the pack, both Bottas and Sergio Perez were making progress forward, the latter climbing to sixth by Lap 10 and Bottas to 10th after his sluggish start.

At the front of the race, Hamilton and Verstappen were in a class of their own, well clear of the chasing pack and lapping, at times, more than two seconds a lap quicker than Alonso in third.

Gasly stopped after 12 laps, the AlphaTauri driver having started the race on a set of soft compound tyres.

That cleared the path for Perez to latch onto the back of Lando Norris, who’d risen to fourth.

The Mexican moved beyond the McLaren as they began Lap 16 to sit fourth, though almost 35 seconds down on Hamilton out front.

Verstappen pitted from second after 17 laps, swapping the medium tyres for the hard rubber.

He rejoined the circuit without losing a position, emerging from the lap just ahead of Alonso.

Mercedes reacted, covering off Verstappen by bringing Hamilton in next time around.

A swift stop saw him back on track with his comfortable advantage in tact, the gap from first to second 8.3s.

Perez was next in, also swapping mediums ford hards as he rejoined proceedings behind Sebastian Vettel to sit 12th.

The pair were soon locked in battle, Vettel forcing Perez around the outside at Turn 1 to maintain the place as they began Lap 23.

The Red Bull driver made the move stick into Turn 1 next time by, shortly after Bottas had found a way through on Norris at the same corner.

Third-placed Alonso stopped after 23 laps, swapping his soft compound tyres for hards in a 2.7s stop.

The Alpine driver emerged in traffic, reaching the apex of the opening corner marginally ahead of Daniel Ricciardo, who was in turn being hunted down by Perez.

Yet to stop, Ricciardo was easy prey for the Red Bull driver as they headed into Turn 1 on Lap 25, Alonso having skipped clear slightly with his own fresh tyre advantage.

Norris stopped after 25 laps to rejoin 10th, promoting the yet-to-pit Bottas up to third.

A mistake from Carlos Sainz as he braked into the first corner on Lap 27 opened the door for Alonso to scythe up the inside of the Ferrari, Perez looking around the outside.

The latter’s move was not successful, though half a lap later he found a way through, taking the inside line at Turn 6 and competing the pass around the outside of Turn 7.

Alonso and Perez then went wheel-to-wheel through the opening sequence of corners at the start of Lap 29.

The Red Bull driver was ushered around the outside of Turn 1 but braved it out to hold the inside line at Turn 2 and seize the initiative.

Running third and yet to stop, Bottas suffered a left-front puncture midway around Lap 33.

It saw him take a trip through the gravel, dragging his car back to the pits, trailing sparks as he did so.

In the lane, the Mercedes was fitted with a new set of tyres and front wing, rejoining behind Ricciardo in 14th.

Verstappen stopped for a second time on Lap 42 – a safety stop as much as anything else in light of Bottas’ dramas.

The Dutchman was well clear of Perez, while Hamilton ahead looked out of reach giving him nothing to lose by adopting the safe approach.

Perez had also been stopped, he dropped back out on track in seventh place with 15 laps remaining.

The Mexican was the fastest man on track soon after, prompting Alonso on the radio to have his team tell team-mate Ocon to “defend like a lion”.

The Alpine driver was running third, though looked far enough ahead to maintain the spot even allowing for his rival’s new tyres.

Perez passed Lance Stroll as they started Lap 46, his engineer adamant the podium was within reach despite a near 17 second deficit in 10 laps.

Having been told to defend with his “elbows out”, Ocon was easy pickings for the Red Bull driver despite the Frenchman’s efforts as he immediately counter attacked.

It came to nothing, and Perez maintained the place as he shot off after Norris ahead.

The McLaren driver stopped at the end of Lap 49, ceding a spot to Perez in the process, after McLaren detected a puncture.

No sooner had the Brit exited the lane was Bottas instructed to pit his Mercedes to retire.

Down the order, George Russell suffered a left-front puncture after 51 laps, though he was able to recover the Williams in less spectacular scenes than Bottas had earlier.

Nicholas Latifi was next to strike tyre dramas, his left-front giving way as he powered down the front straight while the leaders were on Lap 53.

The Canadian pulled off the road at Turn 6, doing so initially without the need for yellow flags.

The spate of punctures made for nervous scenes at Alpine, where Alonso was staring down a 32-lap final stint in his pursuit of the podium.

Throughout the drama, Hamilton had maintained a seven second advantage.

On Lap 55, a Virtual Safety Car was called for to properly clear Latifi’s Williams – while out of the way it was in the firing line should another car leave the road approaching the tight left-hander.

Verstappen capitalised on the VSC by taking service and having a set of soft compound tyres bolted on.

He already held fastest lap, the move effectively snookering Hamilton out of the bonus point.

The VSC ended shortly after Hamilton began the final lap while Verstappen was yet to begin it, allowing the Red Bull driver the opportunity to claim fastest lap – even though it was already within his grasp.

Hamilton delivered victory to close the championship battle, but with Verstappen in second and with the bonus point for fastest lap it was a case of damage limitation.

The late VSC was good news for Alonso, who claimed third over Perez by 2.8 seconds, with Ocon fifth ahead of Stroll, Sainz, Charles Leclerc, Norris, and Vettel to round out the top 10.