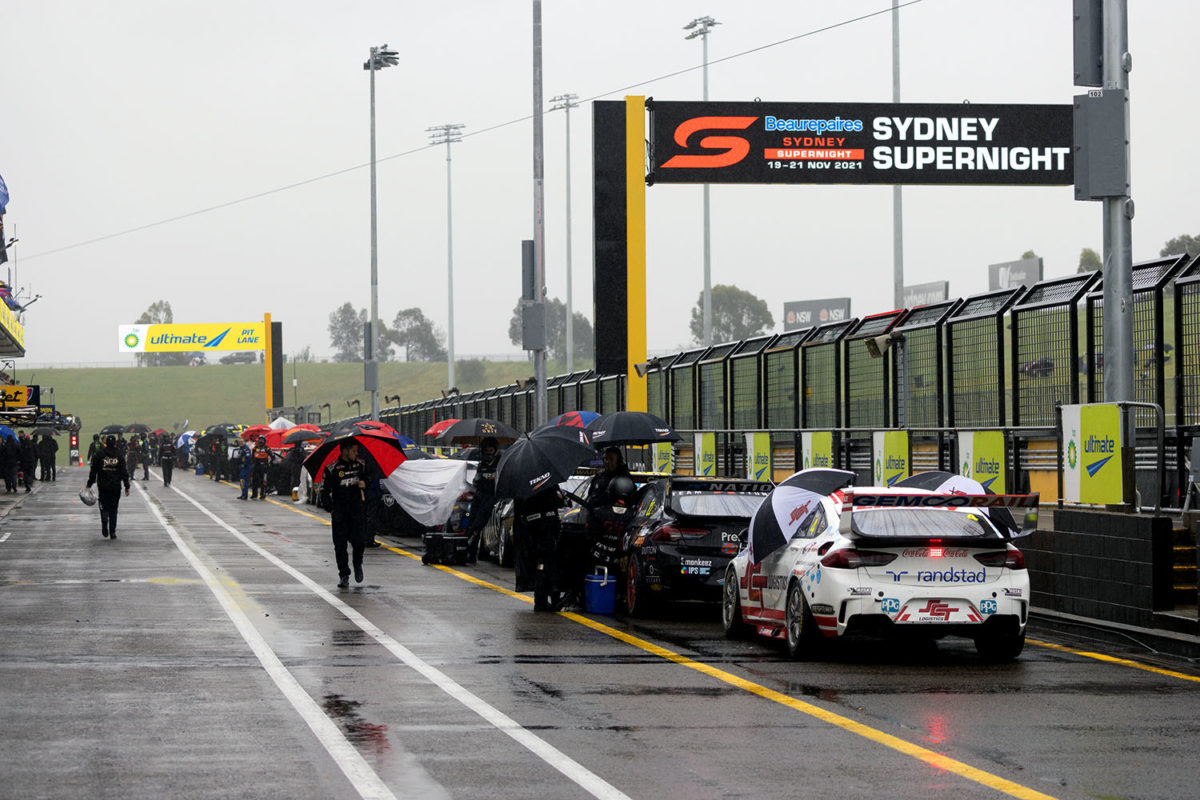 Cars wait in pit lane during the red flag period

Drivers and fans were left disappointed when Race 30 of the Repco Supercars Championship was over before it really began, which is the topic of this week’s Pirtek Poll.

What was to have been a 64-lap journey around Sydney Motorsport Park commenced under Safety Car and continued in that fashion until Lap 6, when Race Control called a red flag from which the contest would not restart.

It was an anticlimactic way for Shane van Gisbergen to clinch what most seemed to regard as a well-deserved championship title, and caused frustration for pole-sitter Nick Percat.

It also occurred just a fortnight after Race 25 was red flagged amid continued rainfall, although a result was achieved on that occasion given 23 full laps of a scheduled 32 were completed.

Notably, the rain which came down during Race 30 appeared to be not nearly as heavy as what was experienced at times during Race 25, something which was backed up by observations from a nearby weather station (Horsley Park) which showed fairly consistent falls adding up to only around 14mm from 9am to the time of the declaration.

Percat observed that he only needed the windscreen wipers on his R&J Batteries ZB Commodore on the intermediate setting, although the experience for those behind him may have been different had a green flag ever come.

The Dunlop Super2 Series did get a handful of racing laps in before their encounter just prior was called, also without a result, although the time needed to reset barriers beyond Moffat Corner (Turn 1) would have snuffed out any chance of a restart anyway.

Super2 Series leader Broc Feeney said the spray was bad from the third position which he held for much of that race, despite similarly light showers as those which occurred in Championship Race 30.

“Someone sort of said that to me before, ‘Why declare it before the main game are going to race?’” he recalled.

“They do have a lot more experience than us but from when I was driving out there, it is damn hard to see, and if you’re buried in the pack, it’s going to be very difficult.

“I couldn’t even see really when the green flag came out, I couldn’t see anything when I was in third place going into Turn 1, so … from my perspective, it would have been pretty hard to continue on.”

Supercars head of motorsport Adrian Burgess cited standing water as the main issue when he spoke during the red flag period, and team bosses Mark Dutton of Triple Eight Race Engineering and Barry Ryan from Erebus Motorsport had a similar take.

A key problem, as they explained, is that regular rainfall in recent weeks, including the weekend in question, had left the ground already waterlogged.

That led to more run-off than otherwise would have been the case, hence the ‘rivers’ and puddles on a track which is located next to Prospect Reservoir, and hence in an area designed to catch water.

A further consideration, as Ryan pointed out despite his team being from Melbourne, is that the Queensland-based outfits cannot return to base in what is barely more than a week before bump-in will occur at Mount Panorama.

One can speculate as to whether or not a different decision might have been made if the Repco Bathurst 1000 was not just around the corner, at a time when logistics are stretched.

However, while Supercars has raced in worse weather before, that did not happen less than a fortnight out from what is unquestionably the biggest race of the year, nor at a time when some crews could not get back into their home state to fix bent cars.

There was thus a not insignificant risk of a team or teams being heavily compromised on the way to Mount Panorama had Race 30 ever made it to a proper start.

One could, of course, retort that professionals should drive to the conditions, but there have been occasions when even the front-runners, on wet tyres, could not keep up with the Safety Car.

Furthermore, a team’s own driver need not necessarily be at fault to be part of a crash which leads to a big repair job before Bathurst.

What do you think? Was calling off Race 30 the right decision or not?