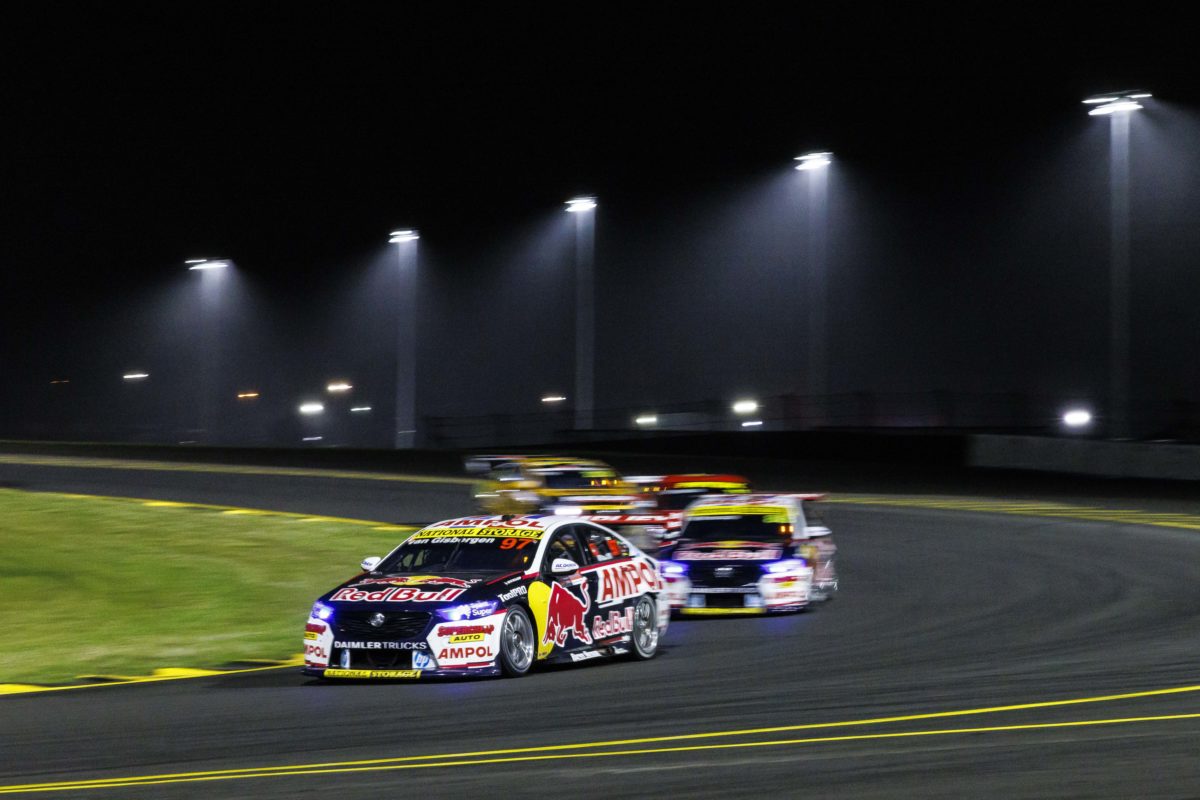 Shane van Gisbergen led home Jamie Whincup in an extraordinary one-two at Sydney Motorsport Park which sealed the teams’ championship with an event-and-a-half to spare.

Whincup had been seventh and van Gisbergen ninth when the second and final pit stop cycle was completed with 19 laps to go, after an early Safety Car seemed to have ruined their strategy of starting on the super soft tyres.

However, the rest of the race played out in such a way that they were able to get back onto the super softs and carve through the field in the third stint, with some help from the rain which began to fall over Eastern Creek.

“It is an amazing one, and to me – and we haven’t had any debriefs yet – I didn’t think we were going to win it till five or six to go,” Dutton told select media, including Speedcafe.com, post-race.

“It was that late in the race that you still thought it was a bit too far out of reach, so when that rain came and the boys stepped up the pace even more, that’s when you’re like, ‘Geez, we’re on here.’

“When Jamie passed Anton [De Pasquale] back, who was on fresher softs, you’re sort of going, ‘Wow, we’re on here,’ so everyone was pumped and we wrapped up the teams’ championship for the year.

“That’s a big achievement that we always strive to achieve, and we didn’t have the teams’ championship this year, so the fact we’ve got it for 2022 to Triple Eight is a huge deal.”

The only Safety Car period of the race was called on Lap 7, which was a major blow for the five who started on the super softs.

Worse still, van Gisbergen had to stack when everyone except the stricken Macauley Jones chose to pit while the contest was neutralised.

Then, he dropped to ninth, between two cars which had just been fitted with super softs, while Whincup at least retained the lead for the time being.

“It was a bit of a rollercoaster of emotions, that race,” said the championship leader.

“I thought more than just us were going to start on the soft, and then getting the Safety Car and having to stack and coming out where we did, I thought we were all over.

“I had no idea what was going to happen with the race and how it was going to progress, and I was thinking maybe we should have done an extra stop with that far to go, but yeah, it worked out perfectly.”

Van Gisbergen and Whincup were even passing those who took new super softs for the run home, although they had been able to look after their tyres early on.

“At the end it was a blessing that we came out with Anton [De Pasquale], whose tyres were actually the same age as my softs,” van Gisbergen added.

“I’d protected them at the start of the race, so I had really good grip, and then once the rain came down, the hard guys were stuffed I think and the softs held the temp a bit longer.”

According to Dutton, the Safety Car fell “pretty much the worst time” for their original strategy, but reusing the super softs seemed a good idea if they could take their second pit stops at a certain point.

“We were confident we had good car pace,” he said.

“[But] We didn’t think we’d be two of five cars starting on super softs; that’s the truth.

“We decided to stick with it and the start was brilliant, and we’re gapping, making sure the overlap risk isn’t there. Jamie was pushing on quite hard to help gap the field so that if there is a Safety Car, Shane would have to queue less.

“But, when the Safety Car comes out on Lap 7, we didn’t make enough ground – you couldn’t – by that stage, so it did come, for that first strategy, at pretty much the worst time.

“Then it’s a tough one because you’re really mindful about minimising damage to either car, so you could short-fill Jamie to minimise the damage to Shane’s race, but then you’re damaging Jamie’s race.

“So, it’s one of those things that you try to minimise the damage to both of their races, and the crew did a great job.

“From then, obviously the guys did an excellent job on hards, and then we reused the softs and had a good result.”

As for the tyre strategy, Dutton explained, “If it had stayed green and not had the Safety Car, we wouldn’t have reused them; you use them up and then you change and you go hard-hard.

“When you take them off early, you get to inspect them in the pits, so you look at them and you gauge how much life you used up within seven laps.

“You do learn from others as well, so Will Brown, [Cameron Waters], we were definitely looking at them and seeing how far they were going.

“But, the big thing is just looking at your tyres and saying, ‘OK, we did that lap time for that amount of laps, and have worn that amount of heat off the tyres,’ so we thought they could go back on and do a good stint home.”

Not only did Triple Eight Race Engineering wrap up the teams’ championship, van Gisbergen’s gap over Will Davison in third in the drivers’ standings means they are also guaranteed that title with either him or Whincup.