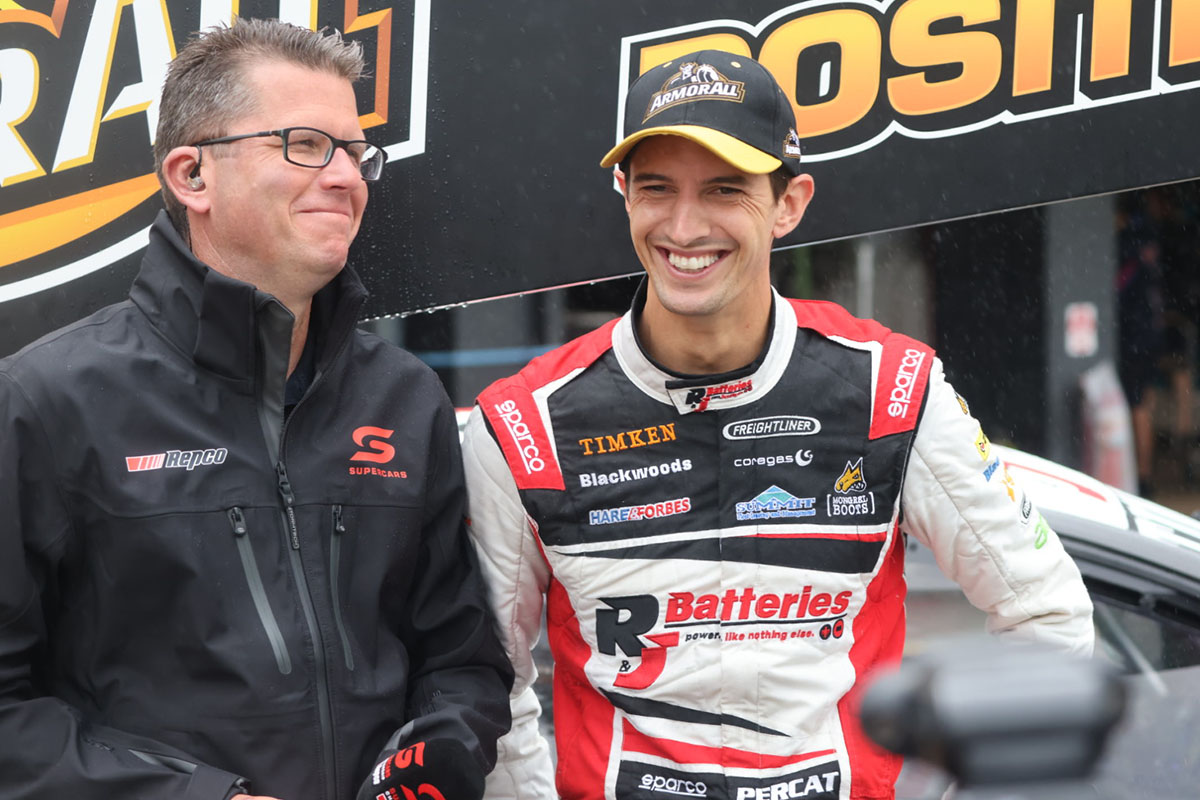 Nick Percat has qualified on pole for Race 30 at a rainy Sydney Motorsport Park, with Repco Supercars Championship leader Shane van Gisbergen to join him on the front row.

Percat was a provisional fifth on the grid before the Top 10 Shootout but was one of two significant upward movers in the session which finalised the starting order for the final 64-lap encounter at the Beaurepaires Sydney SuperNight.

The Brad Jones Racing driver had the #8 R&J Batteries ZB Commodore crossed up at Turn 6 and also rounding Corporate Hill through Turn 7 but would set the fastest split in each of the three sectors, adding up to a 1:43.8601s.

He was still more than half a second up on the field with just van Gisbergen and provisional pole-sitter Andre Heimgartner to come, and neither could get close to Percat’s time.

“It was hard,” said Percat.

“I knew roughly what I had to do because in quali we had a bit of fogging so I sat in it early and I thought ‘I think I’m going to do a 43.8’.

“That was my number in my head and it kind of manifested in a way, and picked the spots where I wanted to make sure I positioned the car well to get really good drive.

“Watching the other guys, I could hear them wheelspinning a lot and I think that’s where the BJR car was mega, it just had such good traction so it would come off the corner well.”

Reflecting on the fact he is about to leave BJR for Walkinshaw Andretti United, the South Australian added, “Massive credit to all the guys at BJR.

“I told Brad [Jones, team owner] when we had our discussions earlier in the year, I’m not going to give up on you and we’re going to still win some trophies, and so far we have got one trophy and now we have got pole position.”

Red Bull Ampol Racing’s van Gisbergen had a moment at Turn 05 on his way to a 1:44.2694s in the #97 ZB Commodore, putting him in the box seat to unofficially clinch a second drivers’ title of his career this afternoon.

Heimgartner ceded multiple tenths relative to Percat in all three sectors, slipping to eighth with a 1:45.4172s in the #7 Ned Mustang.

It was the opposite story for his Kelly Grove Racing team-mate David Reynolds, who was first onto the track and rolled out a 1:44.3977s which was almost 1.5s faster than he had been in Qualifying for Race 30.

That lifted the #26 Penrite Mustang up seven positions to third on the grid, with Tim Slade to join him on Row 2 after clocking a 1:44.5474s in the #3 CoolDrive Mustang.

BJR’s Todd Hazelwood was third-fastest into the shootout and ultimately qualified fifth with a 1:44.5739s in the #14 Cub Cadet ZB Commodore.

Lining up alongside him will be Team Sydney’s Fabian Coulthard (#19 Local Legends ZB Commodore), who had provisionally qualified fourth, then skated wide at the Turn 8 hairpin in his shootout lap as he recorded a 1:44.6272s.

Triple Eight Race Engineering’s Jamie Whincup was seventh-fastest on his way into the Top 10 Shootout, after crashing in the earlier, 15-minute qualifying session.

The #88 Red Bull Ampol ZB Commodore was repaired for the one-lap dash, albeit with little time to refine set-up on the patches, and Whincup caught a slide which nearly tipped him off at Corporate Hill to clock a 1:44.7127s and remain seventh on the grid.

After him and Heimgartner, Row 5 will be Tickford Racing’s Cameron Waters (#6 Monster Energy Mustang), who set a 1:45.9376s, and Walkinshaw Andretti United’s Chaz Mostert (#25 Mobil 1 Appliances Online ZB Commodore), who logged a 1:45.9532s.

The rain continues to fall at Eastern Creek as Race 30 approaches at 15:20 local time/AEDT.