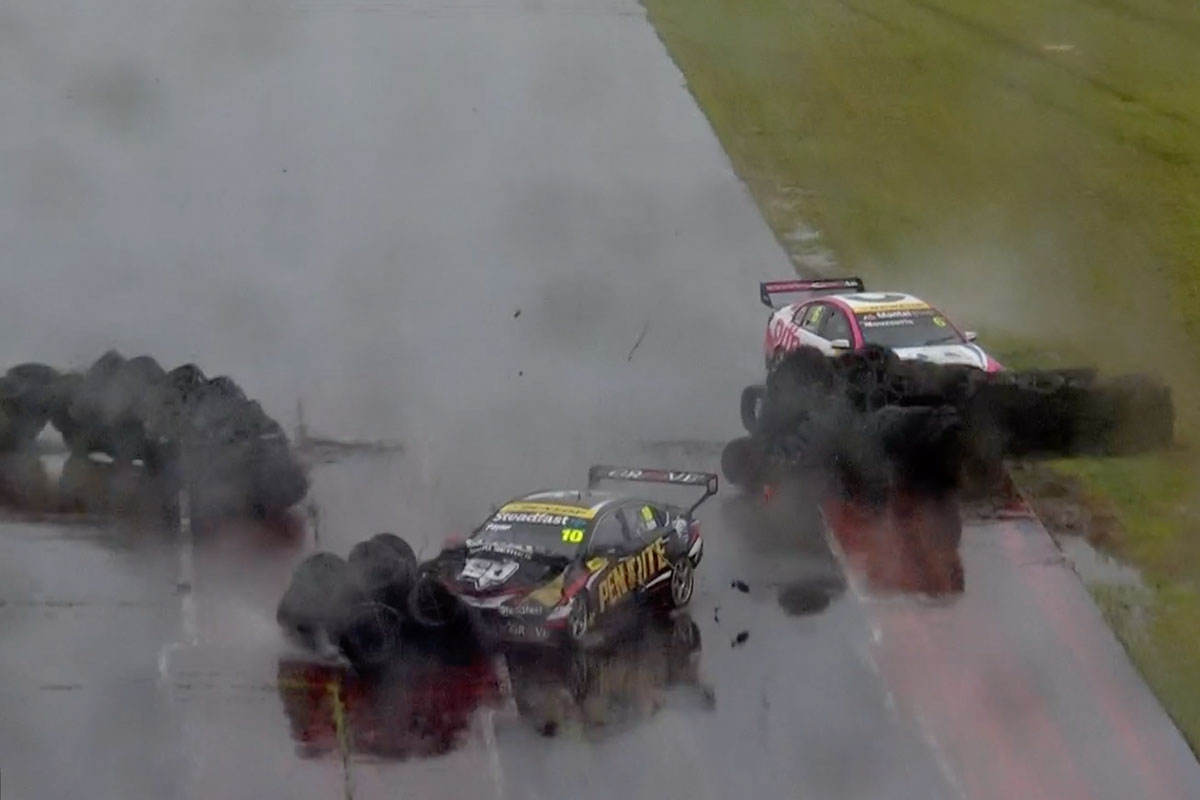 There will be no result in a crash-marred Race 2 of Round 4 of the Dunlop Super2 Series at Sydney Motorsport Park after a red flag saw it declared before half distance.

The Safety Car appeared three times in less than seven laps of a scheduled 18, the last of which was quickly upgraded to a red flag after Grove Racing’s Matt Payne and Triple Eight Race Engineering’s Angelo Mouzouris careered through the barriers beyond Moffat Corner (Turn 1).

Title contender Zak Best had led at the time in controversial circumstances, after overtaking Triple Eight pole-sitter Broc Feeney before they reached the control line for the initial start from under Safety Car conditions.

However, the need to reset the safety barriers at the end of Brabham Straight meant there would be no restart.

As such, the race will not count, and Feeney’s 129-point series lead over the Tickford Racing driver is preserved with just one round to go this year, at Mount Panorama.

Persistent rain at Eastern Creek saw the contest start under Safety Car, much like those in other categories earlier in the day.

Feeney (#888 VF Commodore) was therefore in charge of the field for a rolling start, but he waited a long time to launch, allowing Best (#78 FGX Falcon) to get a run on him.

Best led by more than two seconds after the first racing lap proper, before Everingham went down the inside of Feeney for second spot at Bond Bend (Turn 2) on what was officially Lap 4.

Super3 competitor Steven Page (#2 Eggleston VE Commodore) was also in the barriers at the same time, with a Safety Car called.

The restart came on Lap 7 but no sooner had green flags been waved, both Payne and Mouzouris went straight ahead at Turn 1 and careered through the tyre bundles on the old drag strip, triggering initially another Safety Car and then a red flag.

Mouzouris was seen walking away from his damaged car and Payne was reportedly also OK, but work on the safety barriers prevented a restart, ahead of Repco Supercars Championship Race 30 at a schedule start of 15:20 local time/AEDT.

Fife had also spun off Turn 1 upon the restart, and Jordan Boys (#49 Image VF Commodore) was buried in the order after looping around in the pack on Lap 1, but that was academic in the end.

The fifth and final round of a COVID-abbreviated 2021 Super2/Super3 season supports the Repco Bathurst 1000, with Practice 1 on Wednesday, December 1.