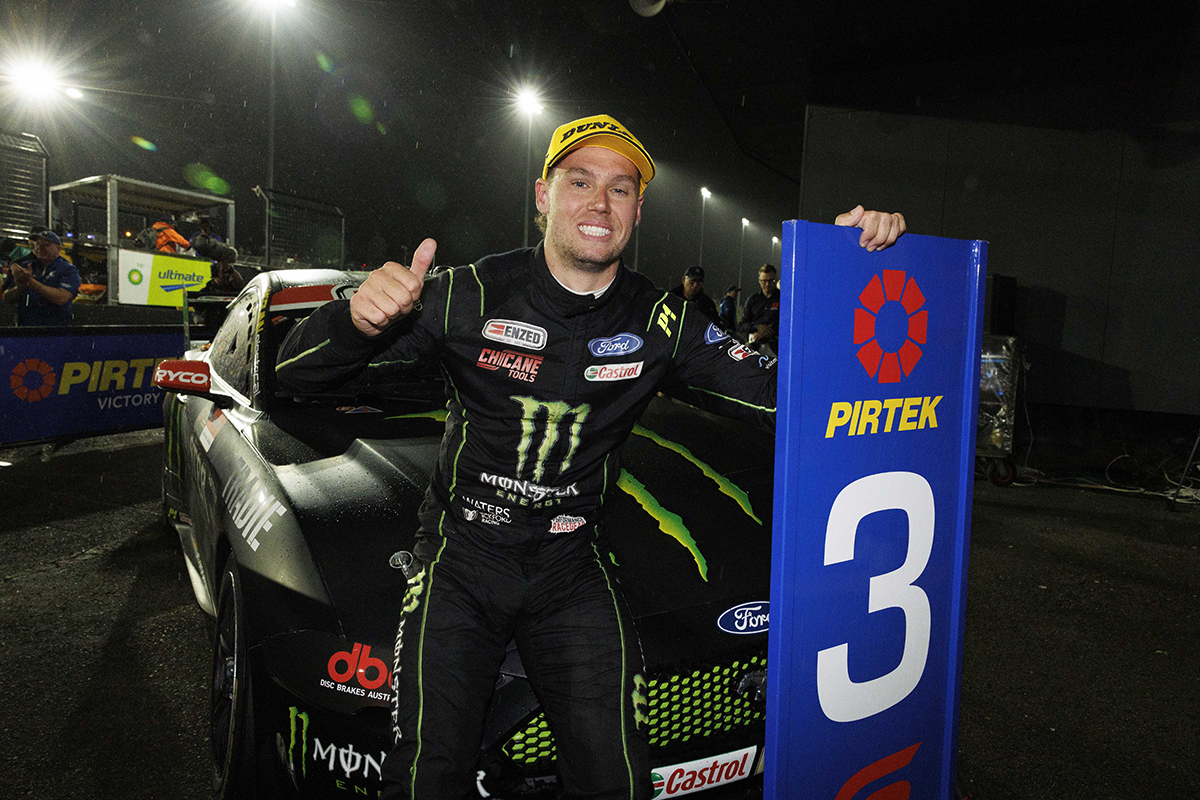 There were mixed emotions at Tickford Racing after a turbulent Race 29 at Sydney Motorsport Park saw them fall short of victory on what they thought was a “brilliant” strategy call.

In the lead-up to the opening race of the Beaurepaires Sydney SuperNight, many had expected the super soft tyre wouldn’t last much more than 10 laps on the abrasive track surface.

Tickford Racing and a handful more put that theory to bed, running either side of 30 laps on a set.

Shod with the faster of the two compounds, Cameron Waters made his way to the front of the field in the #6 Monster Energy Racing Ford Mustang by the race’s midway mark.

Jack Le Brocq in the #6 Truck Assist Racing entry fought through to third while James Courtney was fourth in the #44 Boost Mobile Racing car.

For Waters, at least, it looked like a masterstroke having established a 25-second advantage over Red Bull Ampol Racing’s Jamie Whincup who was the first of those on hard tyres in fifth.

However, Waters’ lead would soon evaporate as he moved to the hard compound tyre while those behind the leading quartet bolted on super soft tyres.

Add to that, rain in the dying stages proved difficult to manage, especially for the hard tyre runners with less grip.

In the end, Waters’ hopes of a win would be dashed with less than three laps to go. Despite putting up some defence, Shane van Gisbergen and Whincup made their way through for a team one-two.

Waters clung on to third but Le Brocq and Courtney weren’t so fortunate, fading to 11th and 20th respectively.

“I think we went through the full range of emotions in that race,” said Edwards.

“We took a bit of a gamble to start on hards and put on super softs at the first stop.

“Being under Safety Car, that allowed our cars to get to the front after the restart and the super softs held on a little longer than I think we expected.

“So for a while, it was looking like a brilliant call. We knew we’d lose time in the last stint on hards, but the gap we had built was pretty big so it was looking pretty good for all our cars.

“Then the rain came. Once the track got wet the cars on super softs had an even bigger advantage, and unfortunately, that cost us spots at the end.

“It’s always tough falling back at the end and in Cam’s case losing a win, but that’s motorsport.

“It’s still a great morale boost for the team to get a podium, and with three straight cars we’ll look to have another run at it.”

Courtney, who wound up the lowest finisher of all the Tickford Racing entries, echoed Edwards’ sentiment.

“That was pretty much the worst kind of rollercoaster of a race I could imagine,” said Courtney.

“We struggled this morning with qualifying and just finding the right balance. It’s been tough these past few weeks and we just haven’t nailed it yet.

“In the race I got a good start and picked off some guys, then with the Safety Car we had to stack behind Cam for a bit, but we ended up with all three of us Tickford car on the super softs with almost everyone else on the hards, so we made hay with that and got to the front.

“We knew we’d be in for a battle at the end and we’d probably drop back a bit, but once the rain came that really did us in.

“For a bit, it looked like we might’ve been on for a decent finish, but unfortunately it didn’t pan out for us.

“Brad [Wischusen, engineer] and the boys are working crazy hard to figure it out, we’ll give it another crack [today] and hopefully I can reward them with a better day.”