Heimgartner on provisional pole as Whincup crashes in Sydney rain

Heimgartner on provisional pole as Whincup crashes in Sydney rain 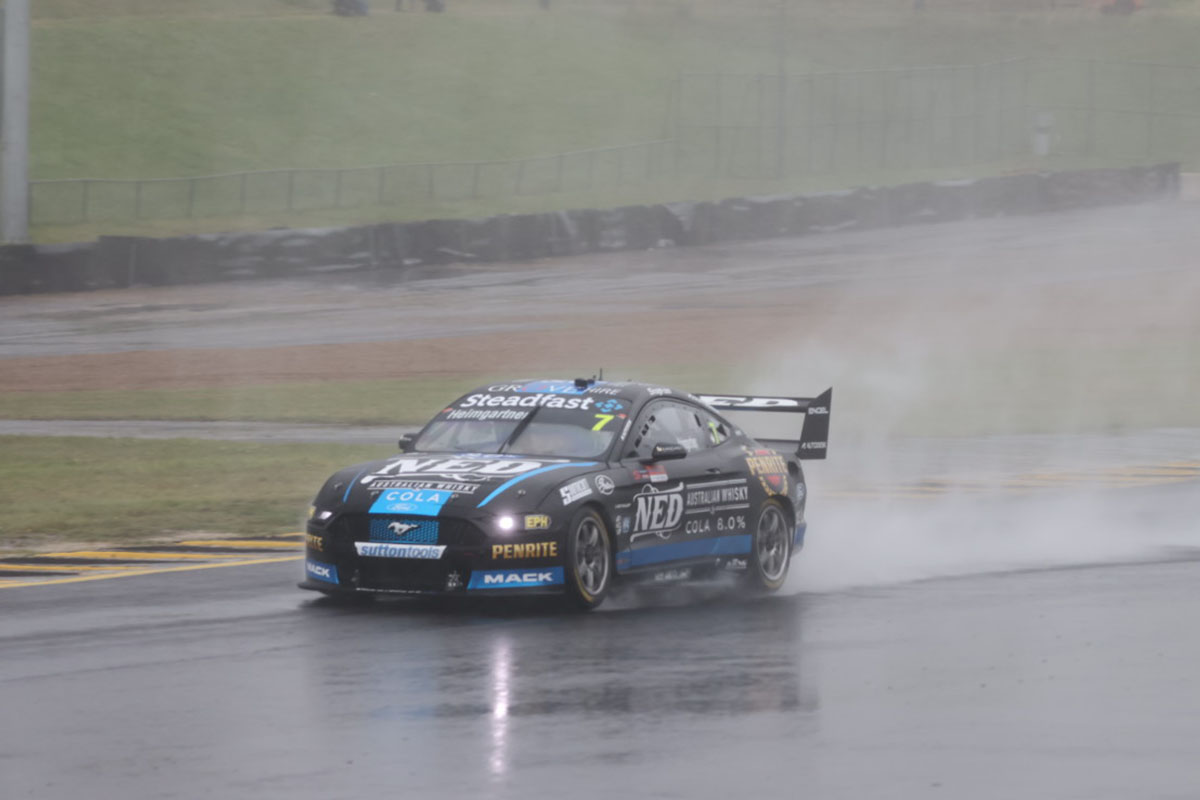 Andre Heimgartner has provisionally qualified on pole position for Race 30 of the Repco Supercars Championship as Jamie Whincup crashed at a wet Sydney Motorsport Park.

Heimgartner’s first flyer in the #7 Ned Mustang was a 1:45.0822s and no one would go any better for the balance of the 15-minute session, meaning the Kelly Grove Racing driver is safely into the Top 10 Shootout.

Whincup also made it, despite damaging his #88 Red Bull Ampol ZB Commodore, but neither Shell V-Power Racing Team Mustang will be in the one-lap dash after Will Davison qualified 11th and Anton De Pasquale 17th.

Whincup’s team-mate Shane van Gisbergen, who is favoured to clinch the drivers’ championship today at the Beaurepaires Sydney SuperNight, is provisionally second on the grid.

As rain fell over Eastern Creek, Heimgartner rolled out a lap which was more than 0.6s quicker than anyone else could go on their first flyers, before van Gisbergen (#97 ZB Commodore) jumped from 16th to second with a 1:45.1380s next time around.

Whincup had just improved his time to a 1:45.5737s when he slid off the road at Moffat Corner (Turn 1) and into the tyre barriers.

The seven-time champion retreated to the pits and that was where he would remain, having bent the rear track rod on the right-hand side of Car #88.

Whincup was sixth at that point, about halfway into the session, but he still made it into the shootout.

The only driver to subsequently beat his time was Team Sydney’s Fabian Coulthard, who drove the #19 Local Legends ZB Commodore into fourth with a 1:45.3967s after the chequered flag.

That made for a double miss for Dick Johnson Racing with De Pasquale only able to clock a 1:46.5654s in the #11 Mustang.

Behind Heimgartner and van Gisbergen was Brad Jones Racing’s Todd Hazelwood in third on a 1:45.1554s which the 2017 Super2 Series winner set before he too became one of a handful of drivers to have an off at Turn 1.

Hazelwood, like Whincup, got the tyre wall but was able to drive the #14 Cub Cadet ZB Commodore out and in fact kept circulating, albeit with no improvement in lap time.

That mattered not given no one else got particularly close, Coulthard almost a quarter of a second away from the top three, while Nick Percat made it two BJR entries in the top five with a 1:45.4163s in the #8 R&J Batteries ZB Commodore.

Heimgartner said post-session, “I love those kind of conditions, it’s good fun just going into the corners hoping you won’t fly off the track.

“So, really good; obviously it doesn’t really mean too much, we’ve got the Top 10 Shootout coming and almost being the first car [in provisional qualifying] is a disadvantage because it’s more time for the heat to come out of the tyres.

“We’ll wait and see but very good start, the car was comfortable at the start, and managed to put in a good time.”