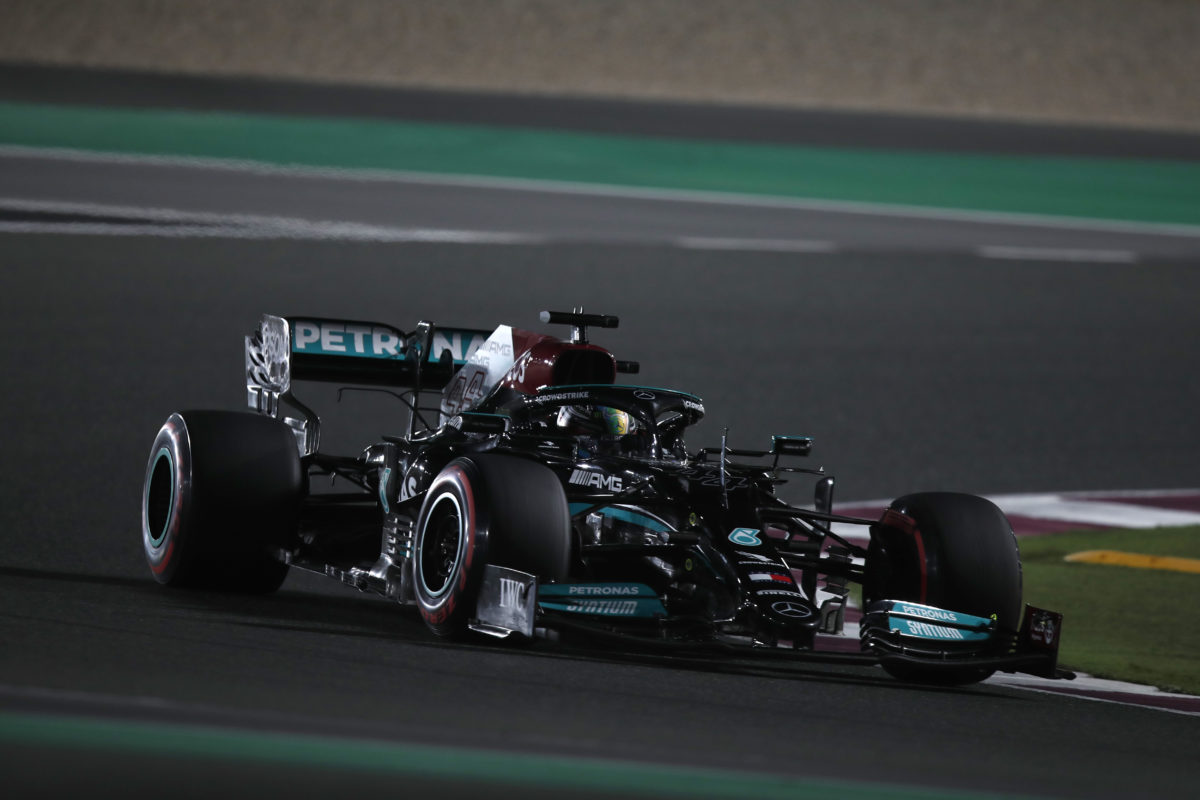 Lewis Hamilton has thrown down the gauntlet to title rival Max Verstappen with a crushing qualifying performance for the Formula 1 Qatar Grand Prix.

The two title protagonists will share the front row in Losail,  Verstappen almost half a second slower than the Hamilton.

Pierre Gasly again impressed with fourth, while Daniel Ricciardo had a difficult session to find himself only 14th.

While the bulk of runners headed out on the soft compound tyres, Gasly boldly opted for a set of mediums in Qualifying 1.

The AlphaTauri driver banked a 1:23.490s to kick things off, which left him on par with the two Aston Martins.

It was a time that looked unlikely to see him through with comfort, as Hamilton logged a 1:22.019s on his first timed lap.

However, a second lap from Gasly saw him improve to 1:22.806s and third fastest as he crossed the line.

Esteban Ocon reported a brake issue in his Alpine, returning to the pits with six minutes remaining but the team unable to resolve the issue.

Verstappen went fastest in the closing minutes of the opening segment, logging a 1:21.996s lap to become the first driver to go under 1:22.

In the final seconds, a traffic jam formed as drivers queued approaching the final corner as they looked to being a flying lap.

Qualifying 2 saw Gasly head out on soft tyres while those around him fitted mediums, which saw him claim the second fastest time after the opening laps were set.

Hamilton was fastest, 1:21.901s leaving him 0.6s clear of Gasly, with Verstappen third over Bottas.

Yuki Tsunoda was also showing well, the Japanese driver fifth fastest but less than 0.1s off his team-mate’s time.

Sitting 15th ahead of his final run was Charles Leclerc, the Ferrari driver almost a second down on the pace needed to escape the segment.

When the clock ticked down, he was eliminated along with George Russell, Daniel Ricciardo, Lance Stroll, and Sergio Perez, who had a set of soft tyres fitted.

Qualifying 3 saw a busy start with all 10 remaining runners heading out immediately as the segment commenced.

Hamilton was immediately on the pace, setting a 1:21.262s on the first time of asking.

The track fell silent after the opening flurry of laps, Hamilton first to head out for his second run with just under four minutes remaining.

He did so on a new set of soft compound tyres, and was followed out by a number of others including Bottas, Gasly, and Fernando Alonso.

Hamilton was fastest of anyone to the first split, 0.3s quicker than anyone else to that point.

He maintained that advantage in the middle part of the lap, logging a new provisional pole time of 1:20.827s.

Nobody had an answer, least of all Gasly who ended the session with a right-front puncture.

It was triggered by the Frenchman running over the kerbing at the penultimate corner, the front wing damaging the tyre and causing it to fail.

Despite that distraction, and without yellow flags to concern himself with, Verstappen did improve on his final lap, though his 1:21.282 was almost 0.5s down on Hamilton, with Bottas third.