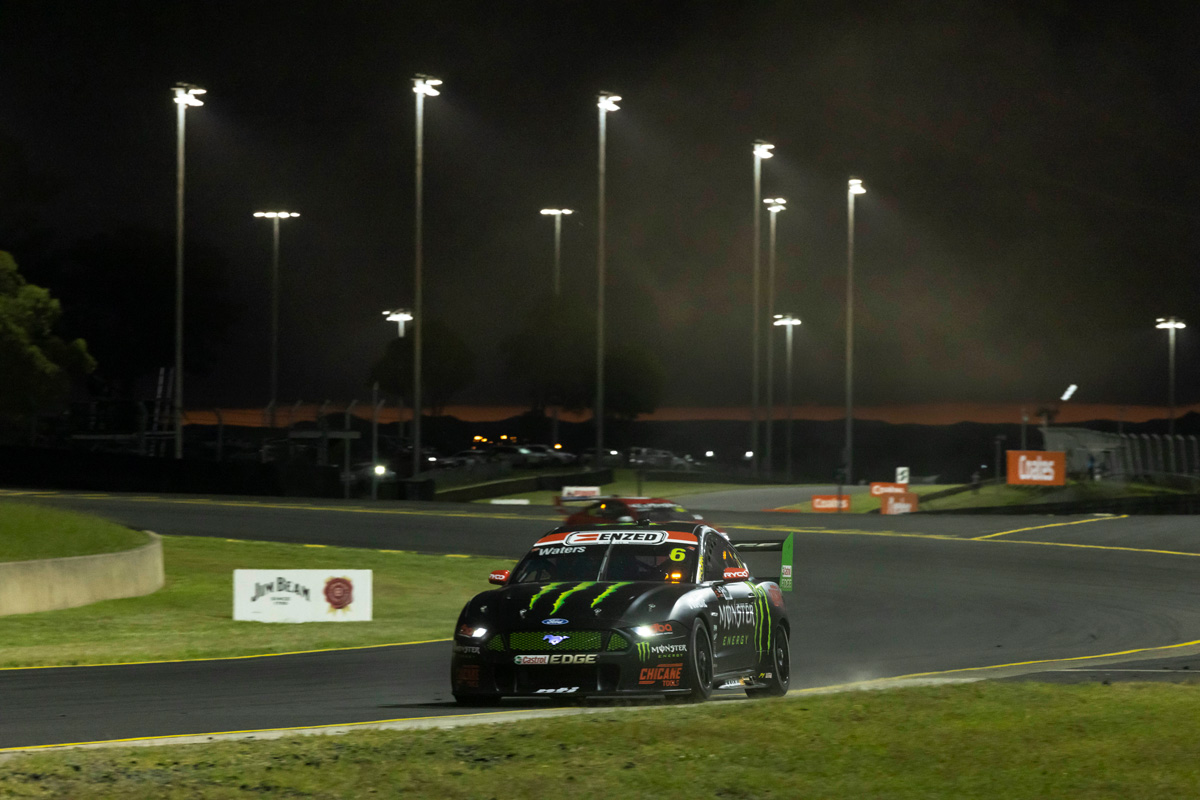 Cameron Waters says he’d “forgotten what it feels like” to stand on the podium after a four-month dry spell came to an end at the Beaurepaires Sydney SuperNight.

In what was an enthralling 64-lap affair, the #6 Monster Energy Racing driver found his way to the lead of the race on Lap 12 after the opening pit stops.

Having started on hard compound tyres, Waters joined the entire field in pitting during a Safety Car intervention when the #96 Coca-Cola Racing Commodore of Macauley Jones suffered an engine failure.

Shod with the super soft tyres, the 27-year-old quickly stormed to the front and stretched his legs, establishing a sizeable lead before the final sequence of pit stops.

Waters would pit on Lap 34 for a fresh set of hard tyres and find his way back to the lead by Lap 45 once those ahead of him pitted.

However, as the race neared its climax, the super soft shod Red Bull Ampol Racing duo led by van Gisbergen made their way through.

Ultimately, Waters would finish third behind Jamie Whincup. Nevertheless, there was reason for celebration at Tickford Racing.

“As soon as the rain came I knew I was going to struggle a little bit with them [van Gisbergen and Whincup] on the super soft, but I’ve forgotten what this feels like [to be on the podium],” said Waters.

“We’ve had such a tough run at SMP so massive credit to all of the guys that have pushed through the whole time; when we have been down they have still got back up and gave me the best car they can give me.

“It would have been nice to give them the P1 but yeah, podium feels like a win. I knew he had the soft on and I knew he was closing pretty quick, so I was just trying to count down the laps and try to keep a gap and make no mistakes.

“He [van Gisbergen] was probably on the better tyre for those conditions but it is what it is. If it didn’t rain, I think we were half a chance.”

Tickford Racing has struggled over the course of the four-part Sydney swing.

Waters’ standing in the drivers’ championship has taken a hit as a result, falling from third to fifth.

The third place finish tonight goes some way to edging the gap out over Anton De Pasquale, who was just nine points adrift of fifth overall leading into Race 29.

“It’s been tough, to be honest with you,” added Waters.

“The boys deserved a lot more… they have been pushing as hard as they can, they have been doing all the changes that we needed to, all the engineers have been scratching their heads and still rocking up and giving their 100 percent, so massive credit to the guys.

“I wish I could have gotten them the win, but this will do.”

The Beaurepaires Sydney SuperNight continues tomorrow with Qualifying for Race 30 getting underway at 10:50 local time/AEDT.