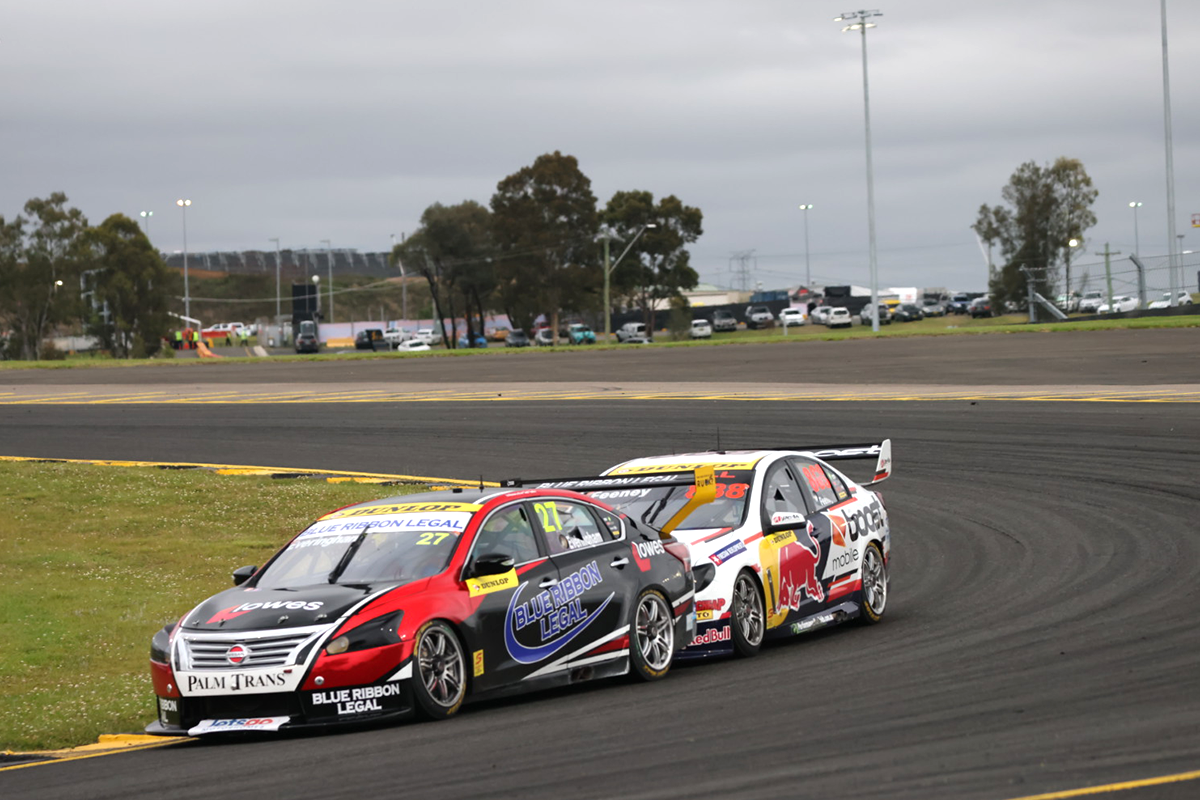 Everingham was out on his own for the first 10 laps but came under heavy pressure from the Triple Eight Race Engineering driver in the closing stages, doing enough to lead when the chequered flag flew three laps early due to time-certainty.

Declan Fraser finished a distant third in the second MWM Nissan Altima, with pole-sitting team-mate Jayden Ojeda only getting home eighth after Lap 1 contact with Feeney put him off the road.

Tickford Racing’s Zak Best has slipped to 129 points behind Feeney at the top of the table after he took 15th following a Lap 1 drama of his own.

There was drama as soon as the lights went out, when Grove Racing debutant Matt Payne stalled the #10 Nissan Altima on the outside of the front row.

Ojeda (#31 Nissan Altima) then came under attack, with Everingham (#27 Nissan Altima) and Feeney (#888 VF Commodore) sweeping around his outside as they turned into the first corner.

By the time they emerged from the second corner, Everingham had prised the lead from Feeney, whom Ojeda tried to round up as they negotiated Turn 3.

However, a touch between Cars #888 and #31 sent Ojeda into the weeds and plummeting all the way back to 21st, mixed in with the Super3 drivers.

The incident, ultimately cleared by stewards, allowed Everingham to bolt clear to a 1.5s lead at the end of the standing lap, and he got almost two seconds up on Feeney after six laps.

However, the future Triple Eight Repco Supercars Championship full-timer had pared that margin back to 1.3s on Lap 10, and when Everingham ran wide in traffic early on Lap 13, Feeney was on him.

Everingham missed the apex again at the Turn 8 hairpin later that same lap, precipitating contact on exit, but the MWM driver somehow caught his Altima as it slewed sideways.

A lap later, Feeney got a better run off Turn 8 and tried to go down the inside at the next left-hander, but Everingham hung tough and had the line as the track turned back onto Brabham Straight.

While 18 laps had been scheduled, time-certainty meant only 15 would be run, with Everingham prevailed by 0.3243s at the chequered flag.

Ojeda was at the centre of most of the rest of the action, throwing the #31 Nissan Altima into Moffat Corner (Turn 1) on multiple occasions as he tried to make up lost ground.

He was back into the top 10 when he went underneath Jaylyn Robotham (#999 Image VF Commodore) at Bond Bend (Turn 2) on Lap 7), and overcame resistance from Matt McLean to move into ninth on Lap 8 at Turn 6.

Matt Chahda was the next target, Ojeda going down the inside of the #18 Matt Chahda Motorsport FGX Falcon on Lap 12 at Turn 2, but by then, D’Alberto was too far up the road.

The local driver therefore finished eighth, ahead of Chahda and McLean, with Zane Morse 11th in the #11 Brema Group VF Commodore and Robotham 12th.

The Tickford driver had tagged Tim Blanchard in the back half of the top 10 as they piled into the first corner of the race, causing the #38 Eggleston VF Commodore to go spinning off the road.

Stewards opted to take no further action over that matter either, although Best had already been set back by the positions he also dropped.

Payne managed 17th after the stall, as well as a spin at Bond Bend when he tangled with Super3 driver David Murphy (#24 David Murphy FG Falcon) midway through the contest.

Blanchard pitted at the end of Lap 7 but returned to the track to be classified last finisher in 28th outright, at two laps down.

Qualifying for Race 2 of the weekend starts tomorrow at 10:15 local time/AEDT.