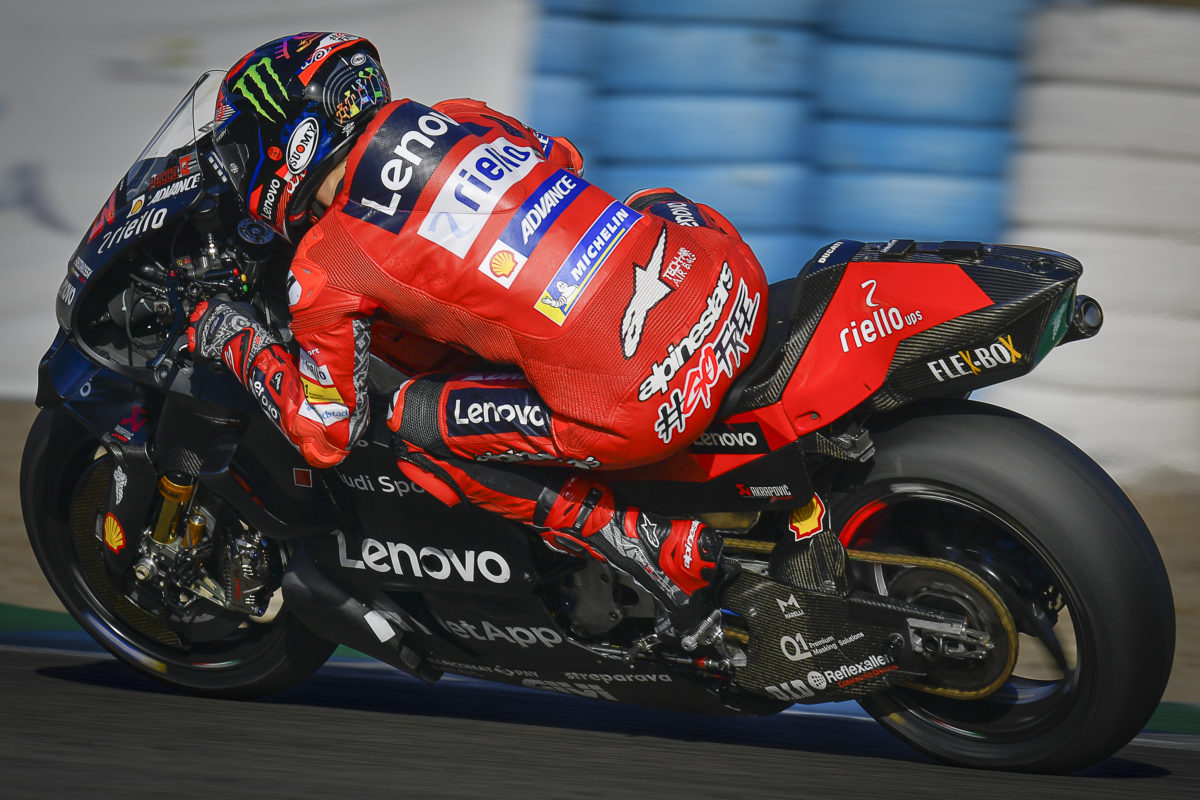 The Italian clocked a 1:36.872s on the second and final day of running at the Spanish Grand prix venue, and finished up almost half a second clear of the field.

The Bologna factory had its 2022 prototype at Jerez, with a newer engine, front fairing, and air intake, and Bagnaia came up just three tenths short of Maverick Viñales’ all time lap record.

He and Ducati Lenovo Team-mate Jack Miller used a new, longer exhaust on both days of the test, with the Australian ninth on Day 2 with a 1:37.717s that was good enough for 10th on combined times.

It was also a promising test for Honda, notwithstanding the injury-enforced absence of Marc Marquez.

Idemitsu Honda LCR’s Takaaki Nakagami was quickest on the opening day with a 1:37.313s that was beaten only by Bagnaia after two full days of activity.

On a factory Repsol Honda Team entry, Pol Espargaro, who missed the final race of the year due to a heavy crash, was fourth-quickest on Day 2 on a 1:37.496s, although seventh on combined times.

Espargaro worked through different aerodynamic packages while Honda has seemingly changed virtually everything on the RC213V.

Suzuki’s Alex Rins clocked a third-fastest 1:37.423s on Day 2 to be sixth overall, just ahead of Pol Espargaro and Viñales.

The latter was the fastest Aprilia rider on both days, and was able to try a different chassis to that which he raced days earlier at Valencia.

KTM’s riders kept their cards close to their chests, with Brad Binder the Austrian marque’s best in 13th on combined times.

As far as Tech3 KTM Factory Racing’s pair of rookies were concerned, Raul Fernandez ended up 20th on a 1:38.691s, two positions and 0.037s up on Moto2 world champion team-mate Remy Gardner.

Sepang will host a Shakedown Test on January 31-February 2, 2022, then the first Official Test of the calendar year on February 5-6.