Lowndes out to take pressure off retiring Whincup at Bathurst

Lowndes out to take pressure off retiring Whincup at Bathurst Craig Lowndes is out to soak up the media focus which would otherwise fall on Jamie Whincup in his final start as a full-time driver, at the Repco Bathurst 1000.

This year’s Mount Panorama enduro will be Whincup’s last before he retires from competing behind the wheel, at least on a full-time basis, to take up the managing director role at Triple Eight Race Engineering.

The 38-year-old has shared three of his four Great Race wins so far with Lowndes, a pairing which was restored after the latter’s own step back from regular Supercars driving at the end of 2018.

Whincup is planning on contesting next year’s Bathurst 1000 but, whatever decision he does finally make on that front, December 5, 2021 will be a major day in the history of the Repco Supercars Championship even beyond the running of its biggest race.

It will mark the end of an era which has seen the Melbourne-born driver set new benchmarks both in terms of his seven championship titles and 124 race wins so far, since debuting in the enduros of 2002.

Lowndes hopes to draw some of the gaze which would otherwise be directed at his long-time team-mate as Whincup spearheads their Bathurst campaign for another year.

“To be honest, what I want to do is take pressure off him,” said the seven-time Great Race winner.

“If I can do that, I’ve done my job, in the sense that if he wants to just focus on a qualifying car and a race car, I’ll let him do that.

“We can basically take the media pressure off him in the sense of all that wind-up and the hype of being his last race.

“I want to try and do that, to just let him focus on what he does best, which is racing cars.”

While Lowndes’ final event as a full-timer unfolded in Newcastle, he does know the feeling of contesting the Bathurst 1000 for the final time in one’s own car, and thus qualifying in a Supercar at Mount Panorama for the final time.

While he believes Whincup has relaxed since his big pre-season announcement, he cited last weekend’s fiery intra-team battle at Sydney Motorsport Park as evidence of the fight which remains.

With that, Lowndes hopes they can emulate what he achieved in winning the Great Race in his retirement year of 2018. 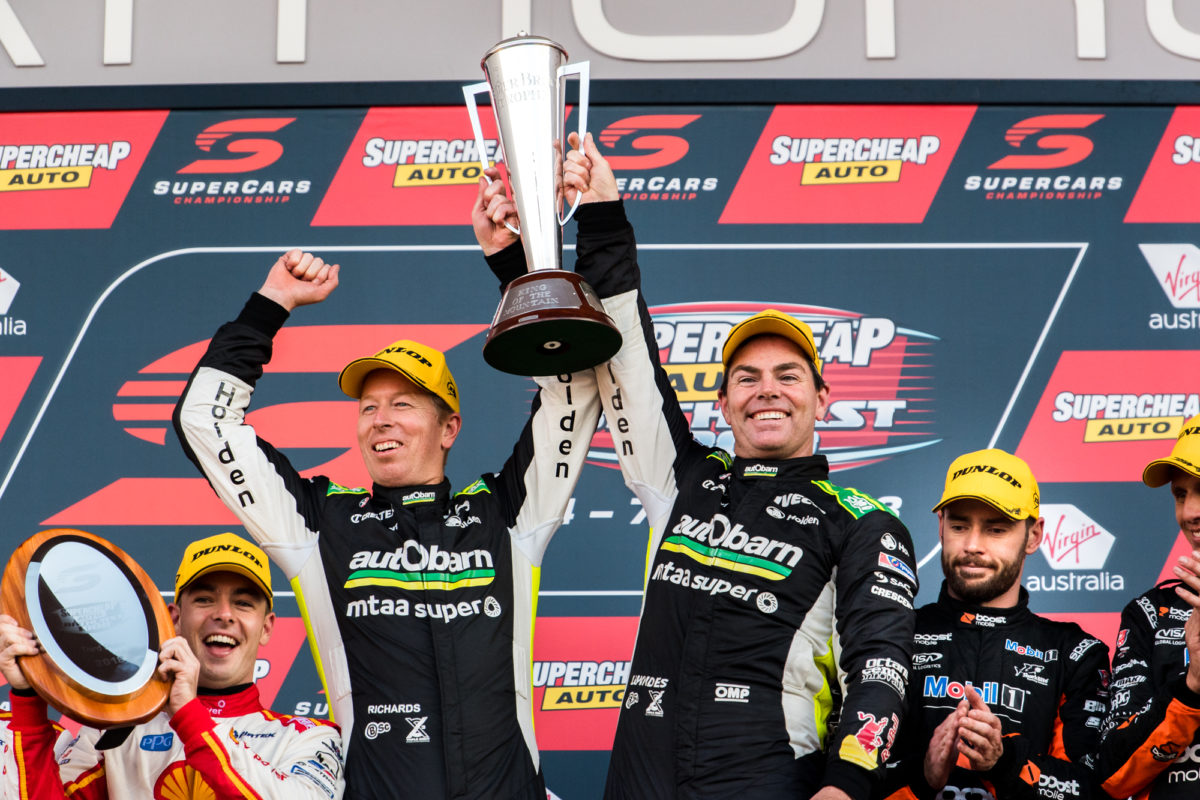 “I think I’ve seen a bit of a change over the course of this season,” said the 47-year-old.

“Even since the announcement of it, he’s relaxed more; I think he’s enjoying the racing more.

“We saw with the battle with Shane [van Gisbergen] and him, he hasn’t lost it, he’s definitely keen and hungry to keep winning.

“So for me, hopefully I can support him in both sides; the emotional side of it, knowing what he’s going to go through, but at the same token I want to send him off in the best way I can, and that’s to win it.”

The three-time champion is also hopeful that ‘J-Dub’ receives plaudits like those which he enjoyed back in November 2018 in the Hunter.

“2018 was great for me, and hopefully I can do the same for Jamie,” remarked Lowndes.

“It really is something that you remember, that time; I remember when we were in Newcastle, and the whole basically walk down pit lane and everything else, and the support we got from all your peers, all the people, all the fans, and Jamie deserves that.”

Lowndes is likely to cut laps in the Additional Drivers Practice session which represents the start of Supercars Championship on-track activity at the Beaurepaires Sydney SuperNight, tomorrow from 16:40 local time/AEDT.

The opening practice sessions for the Bathurst 1000 take place on Thursday, December 2.