Shell V-Power Racing Team driver Anton De Pasquale reflects on his latest successful weekend at Sydney Motorsport Park, including battling team-mate Will Davison for the lead, in his exclusive The Distiller column presented by Dasher + Fisher.

For us, SMP3 was a bit of maximising the good and bad.

The way the tyre format was – basically like SMP1 – you have to pay a price at some point.

But to walk away with a couple of wins and a top 10, I’m stoked. We absolutely would have taken that going into the weekend and any time you’re at the front, you definitely sleep better at night.

With tyres and formats all pretty familiar, the only thing we really had to adjust to was the conditions and mainly the wind direction.

I’ve had my fair share of chats with the TV guys these past few weeks but I’ve always said if I’m talking to Jess and Garth and Mark and Neil and Larko, either I’m having a shocker or I’m having a good one, so it’s good to be talking to them for good reasons.

Sunday we had another couple of decent qualis but knew the races might be a bit tougher as our tyre situation was sort of compromised versus others.

Ludo worked some magic and we had good pace for the first race, when we had a Shell V-Power Racing Team front-row lockout.

It was an awesome battle at the start with Will.

His side of the garage went more aggressive on strategy so we ended up coming out behind him after our pit stop.

We didn’t really have any direct threat from behind and there was no one ahead of us, so it was good that we were given the green light to race each other.

Obviously we were never going to make it hard for each other and block and go crazy, but if he had the pace to win the race, he was in front of me and he had that opportunity, so that’s I think the best way to do it.

Will didn’t make it too hard for me which was good and I would do the same if it was the other way around.

But yeah, that’s what we want to see; you don’t want to see cars battling for the lead and just moving over if they don’t have to. 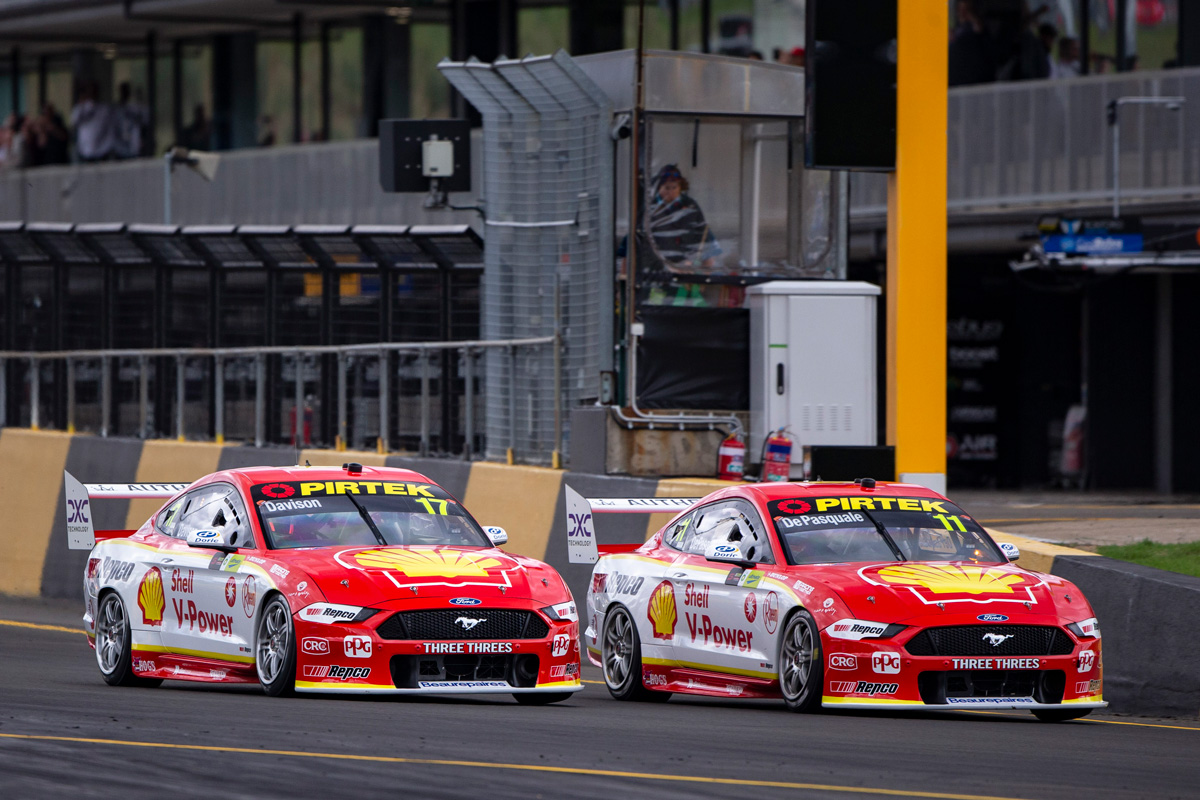 Obviously the team comes first so if there was a situation where we had to do it, obviously we’d work that out, but me and Will get on awesome so we’re not trying to stop each other from a result.

It was a shame we didn’t get the one-two but we’ll have another crack at that this weekend.

The last race of the weekend was where the pain came.

We’d gone pretty hard on making sure of the win opportunities that were presented to us in the first two races so we just wanted to hang on as best we could on Sunday afternoon.

I was actually trucking along alright but what hurt us was getting stuck behind Chaz in the pit stop sequence. We took four tyres, he took two, so he got out in front of us and stopped us from running in clear air.

Without that, we might have been able to finish a little bit higher, but ninth wasn’t too bad to be honest.

It would have been good to get amongst the battle that was playing out up the road between Will Brown, Jamie and Shane, but it wasn’t to be.

Any time you get a new race winner is good for the sport, and it was good to see my old team/co-driver get a result. They’ve been fast every week at SMP and deserved it.

When this column gets published, we’ll be in the middle of our final test day of the year.

We didn’t test before SMP because we couldn’t get my co-driver Tony up to Queensland, so it will be awesome for him and Alex to get some laps under their belt. But at the same time, we don’t want to overdo it with the crew still having to turn the cars around for another round starting on Friday.

With longer races, one of them under lights, and both the super soft and hard tyres in use this weekend, it’s going to be completely different.

Because of the gearbox problem we had at SMP2, we haven’t done any quali runs on the hard but our race pace on it was pretty good that weekend. As for the super soft, we haven’t used it since Darwin so that should be interesting.

So yeah, two rounds to go. We’re actually pretty close to fifth in the championship now despite having five DNFs but results and learnings for next year are still the main goal with Shane being too far ahead.

We’ll see what we can do this weekend.

Thanks for your support.