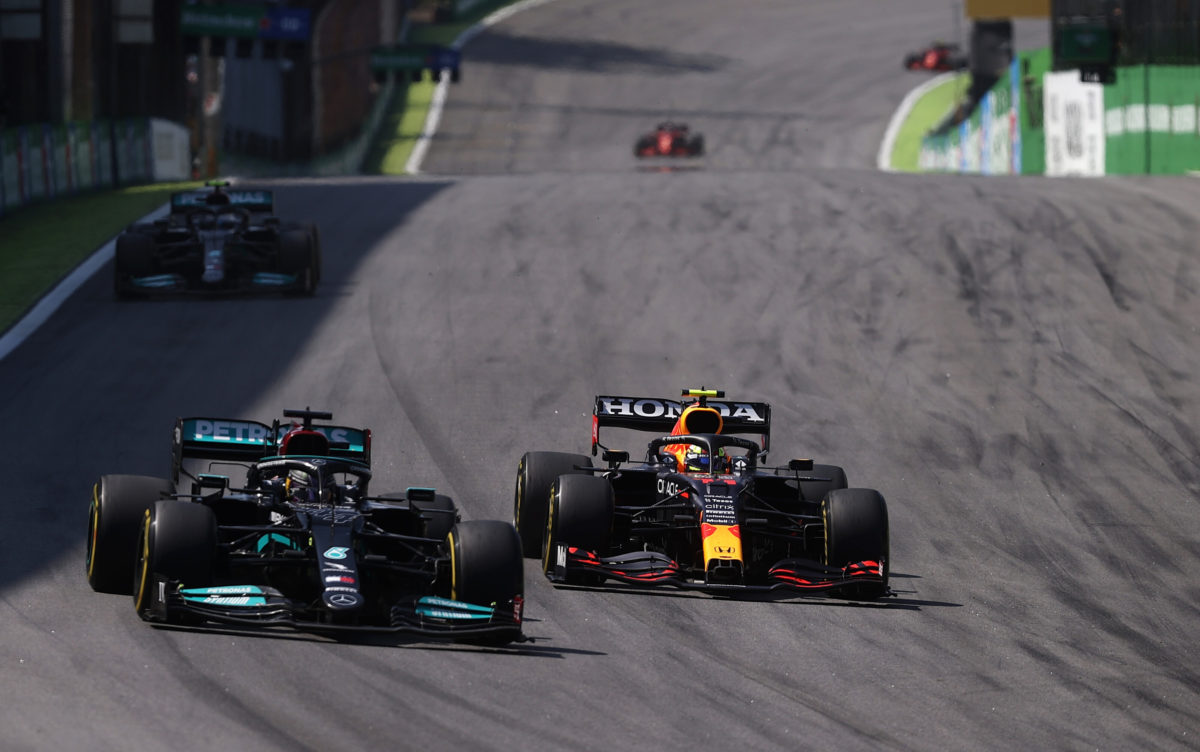 An angry Toto Wolff has all but issued a declaration of war as the 2021 Formula 1 world championship enters its final three rounds.

Mercedes and Red Bull are locked in battle in the constructors’ championship, while Lewis Hamilton and Max Verstappen wage war over the drivers’ crown.

Tensions were turned up a notch in Brazil last weekend after Mercedes felt a series of rulings from the sport’s governing body disadvantaged it.

On Friday, Hamilton was excluded from qualifying when the DRS slot in his rear wing was found to be 0.2mm oversize on one side.

That was antagonised when, ahead of Sunday’s race, it was revealed Red Bull had been allowed to change aspects of its rear wing in parc ferme conditions.

It was the third successive event the team had been allowed to do so, though Horner rejected the FIA’s reported changes off camera to Sky Sports.

In the race itself, a moment between Hamilton and Verstappen saw the pair leave the road while battling over the lead.

Noted by the stewards, it was not investigated, a point which clearly left Wolff frustrated, emotions which boiled over when Hamilton did find a way through a short time later.

Post-race, Hamilton was fined for celebrations on the cool down lap following the race after he undid his seatbelts.

“I don’t want to moan here, because that is not how I see the sport,” Wolff said, before hearing of Hamilton’s subsequent summons.

“But when all those details swing against you, it’s just something that I’m just angry about.

“I will defend my team, my drivers, to what comes. I’ve been always very diplomatic in how we discuss things, but diplomacy has ended today.”

Following Hamilton’s pass on Verstappen, Wolff was seen celebrating and gesticulating at the camera – a signal, he’s since revealed, to FIA race director Michael Masi.

It was borne out of frustration given the Red Bull driver’s earlier move.

“Whatever is in the director’s notes, we are going to accept,” Wolff explained.

“I’m also okay if the director’s notes are being shredded, and we just race it out like we’ve had today.

“But if the director’s notes say that you can’t push anybody off the track in Mexico, and then obviously that’s valid here too, and you’re actually being driven off the track, it’s just not very consistent to call it that way.

“So my discussion with the race director was not broadcast, but my reaction was, and we’ll clear that… discuss it behind closed doors.”

The rivalry with Red Bull has been simmering for some time, with a key flash point coming at the British Grand Prix when Hamilton and Verstappen tangled on the opening lap.

It appears to have been sparked again, with Wolff less than pleased with how the weekend unfolded for his team.

“We had a broken part on our rear wing which we couldn’t look at, couldn’t analyse, failed the test and got disqualified. Very harsh,” he said.

“Then you see on the Red Bull repairs, three times in a row on a rear wing, three times while being in parc ferme with no consequence.

“That’s one thing, and obviously that really piqued with the decision in the race which was, I mean, really wrong defence for Max, absolutely, an inch over the limit.

“But he needed to do that to defend.

“And Lewis just managed it even more brilliant by avoiding the contact and end the race that way.

“That was just over the line, should have been a five-second penalty, at least.

“Probably Max knew that, but [officials] just brushing it under the carpet is just the tip of the iceberg. It’s laughable.”

Having held a single-point advantage over Red Bull heading into the Sao Paulo Grand Prix, Mercedes now holds an 11-point lead courtesy of Hamilton’s win and Valtteri Bottas in third.