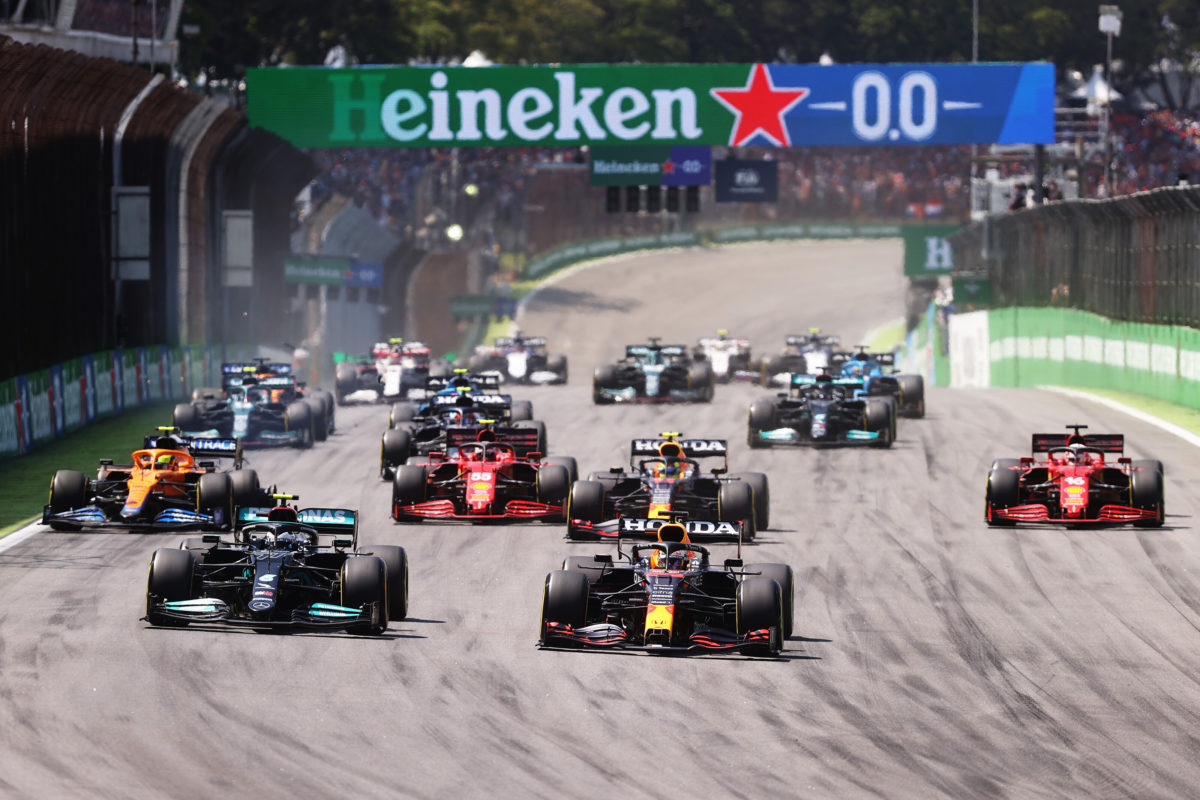 The start of the Formula 1 Sao Paulo Grand Prix

A charging drive from Lewis Hamilton was rewarded with victory in the Formula 1 Sao Paulo Grand Prix.

Starting 10th, the Englishman made rapid progress before waging battle with Max Verstappen in the closing stages.

The Mercedes driver won out in that duel, claiming his sixth win of the season and closing the gap in the drivers’ championship to 14 points with three races remaining.

Immediately off the start, Lando Norris picked up a puncture as Verstappen stole the lead from Bottas into the first corner.

The Finn then ran wide at Turn 4, opening the door for Perez to make it a Red Bull one-two at the front.

Hamilton moved forward well, claiming seventh midway around the opening lap having started 10th, making that sixth at the end of the opening tour.

As they started Lap 3, Hamilton climbed to fifth, easily passing Carlos Sainz into the first corner even without the use of DRS.

Charles Leclerc was easy pickings too, leaving him fourth behind Bottas, who was promptly moved aside in defence to his team leader.

Having been waved through, the gap from Hamilton to Perez was 3.2s as they commenced Lap 6, just as the Safety Car was deployed to clear debris left behind after Yuki Tsunoda lost his front wing at Turn 1 battling Lance Stroll.

The race resumed as they started Lap 10, Verstappen keeping the pace low until he reached the grid on the pit straight.

It was status quo at the front, though Bottas was forced to defend against Leclerc, who had three nibbles at the rear of the Mercedes without success.

Verstappen extended a 1.3s advantage on the first racing lap after the Safety Car, Perez behind him less than half a second clear of Hamilton.

The Brit was unable to make a move before a Virtual Safety Car was deployed to clear more debris, this time for Mick Schumacher’s front wing.

The Virtual Safety Car was withdrawn as the leaders were in the middle sector, Hamilton looking to have dropped off the back of Perez in the process.

Hamilton had DRS on Perez as they ended Lap 16 though wasn’t close enough to make a move.

Next time around Hamilton swept around the outside after the second placed Red Bull had tried to break the tow out of the final corner.

Perez immediately fought back, reclaiming the spot on the run to Turn 4.

A lap later, Hamilton repeated the move, this time pulling far enough clear to maintain second place as Bottas began shaping up for a move on Perez.

It remained largely stagnant over the following laps, shrinking marginally to 3.5s after 23 laps before expanding to 3.8s next time by as they lapped Schumacher.

Hamilton pulled the trigger after 27 laps to switch onto the hard compound tyres, Mercedes turning the Brit around in 2.4s, rejoining in clear track behind Daniel Ricciardo in seventh.

Red Bull reacted by calling Verstappen in, the Dutchman maintaining the lead though not with the advantage he’d enjoyed earlier.

As the championship leader swept onto the circuit, Hamilton negotiated his way beyond Ricciardo shortly before Perez was hauled in from the lead.

Another Virtual Safety Car was called when Stroll’s Aston Martin shed some bodywork down the front straight.

It was timed perfectly for Bottas, who pitted and leapfrogged Perez as a consequence.

The green flags waved again as the leaders rounded Turn 3 on Lap 30.

Hamilton had marginally reduced the gap to Verstappen, hovering just outside of DRS range as the lead battle began to escalate.

Key was the additional pace the Red Bull driver had through the middle third of the lap, allowing him to remain clear of DRS range.

On Lap 40, he stopped for a second time for another set of hard rubber bolted on.

He rejoined behind Nicholas Latifi, following the Williams through the long pit exit before the Canadian pulled aside and allowed Verstappen through.

Bottas pitted next time by, slotting back in behind Leclerc in fifth, while Perez headed in next time by.

It was then Hamilton’s time, Verstappen regaining the lead having slightly extended his lead to 2.6s.

Out of Turn 12, Hamilton was within range though too far back to make a move into Turn 1.

He was still in DRS range on the run to Turn 4, Hamilton drawing alongside as both left the track, Verstappen appearing to open the steer wheel mid-corner.

Officials noted the incident though it was soon after confirmed no investigation was necessary.

Ricciardo’s race came to an end on Lap 50 when he parked his McLaren with a loss of power, having been running well inside the top 10 for much of the race.

Having cooled for a time, the battle for the lead heated up once more.

Hamilton and Verstappen went side-by-side again into Turn 4 on Lap 58, the pair both navigating the corner within the confines of the track on that occasion.

The stay of execution didn’t last long as Hamilton seized the lead next time by, using DRS on the run out of turn 1 to steal the initiative.

It was a move set up on the front straight, Verstappen forced to defend into the first corner, leaving him vulnerable as they headed down the hill.

Rubbing salt into the wound was an unsportsmanlike flag for the Dutchman, who had weaved down the back straight in an effort to break the tow the lap prior to Hamilton’s pass.

Once out front, Hamilton quickly skipped clear to take firm control at the head of affairs as the race petered out.

Mercedes therefore stole victory, the drivers’ championship battle closing to 14 points in the process, with Hamilton first from Verstappen, Bottas, and Perez, who claimed the bonus point for fastest lap on the final tour.

The two Ferraris were next home, ahead of Gasly, the two Alpines, and Norris.

It marked a stunning recover for Hamilton and Mercedes, the seven-time world champion overcoming an effective 25-place grid penalty to take the 101st win of his career.