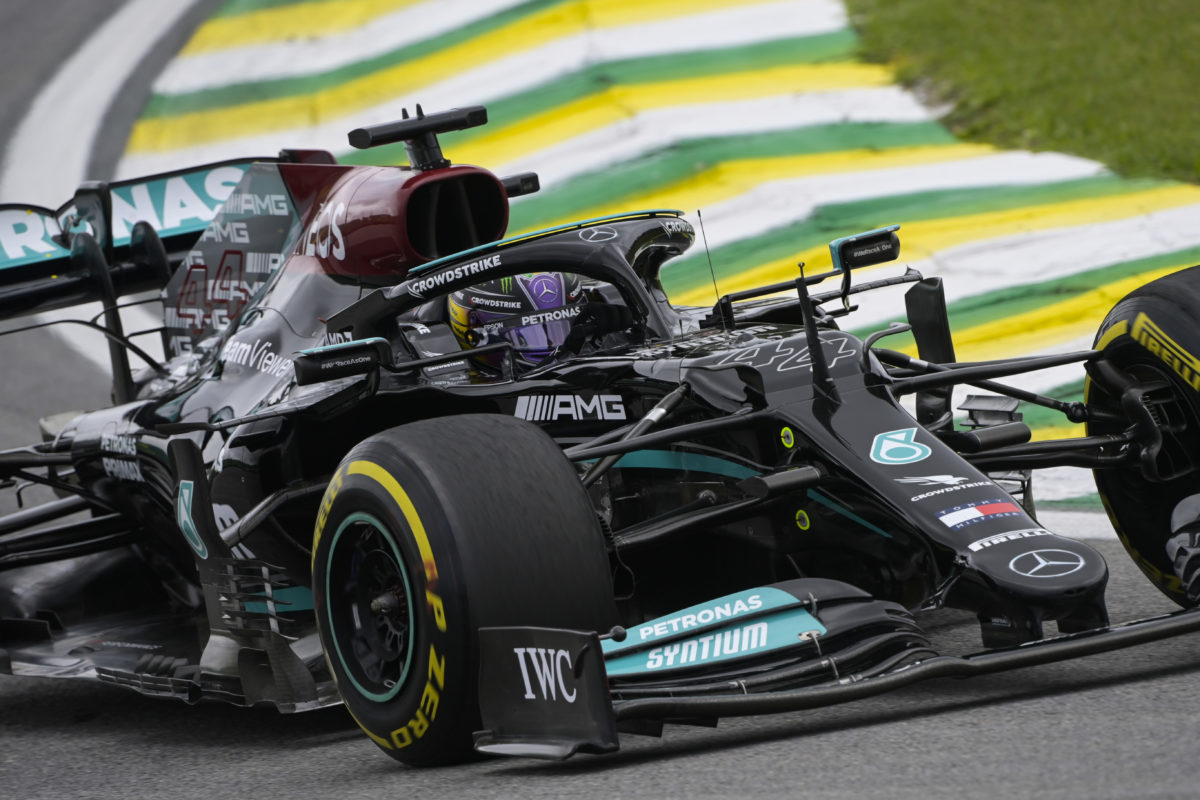 The Mercedes driver headed into the event’s competitive sessions with a five-place grid penalty owing to an internal combustion engine change.

Having qualified fastest on Friday, he was then excluded after an irregularity was found on his rear wing in scriutineering.

That prompted a last place start for Sprint Qualifying, which he converted into fifth on Saturday afternoon.

Taking his power unit penalty saw him line up 10th on Sunday, storming his way forward to claim the 101st win of his career.

“I was pushing as hard as I could,” Hamilton said.

“But from last on the grid, and then another five-place penalty, it was I think the hardest weekend I’ve had.

“My dad reminded me of 2004, when I was in Formula 3 in Bahrain, and I started last and I finished 10th, and then I finished first.”

Hamilton’s race was highlighted by a no-holds-barred battle with title rival Max Verstappen.

The pair drew alongside one another multiple occasions before the Mercedes driver ultimately gained the upper hand.

A moment at Turn 4 early in the scrap saw Verstappen appear to open the steering, forcing both drivers off track in an incident noted, but not investigated, by officials.

Hamilton had earlier got by at Turn 1, but his Red Bull rival soon surged back at Turn 4.

It was a lesson he learned quickly, and all subsequent attacks saw Verstappen forced to defend into the first corner, and compromise himself for the run down the back straight, where he was duly attacked.

Knowing he was vulnerable, at the second time of asking the Dutchman weaved in an effort to break the tow, for which he was later given an unsportsmanlike flag.

A lap later, Hamilton was through, the Mercedes too fast in a straight line for the Red Bull to contend with.

It capped off a dramatic turnaround for the Englishman, who has closed the world championship deficit by five points to sit 14 down on Verstappen with three races remaining.

“Coming in this weekend, I never ever thought we would be able to close the gap like we have today,” Hamilton said.

“And then these things that just kept going against us, but I think it really just, and for everyone, just never give up.

“That’s really how I’ve kind of approached this weekend.

“[It] feels like a first because I don’t feel like I’ve had a win for a long time.”

The final leg of F1’s current triple-head will see the circus head to the Middle East next weekend and the inaugural Qatar Grand Prix.