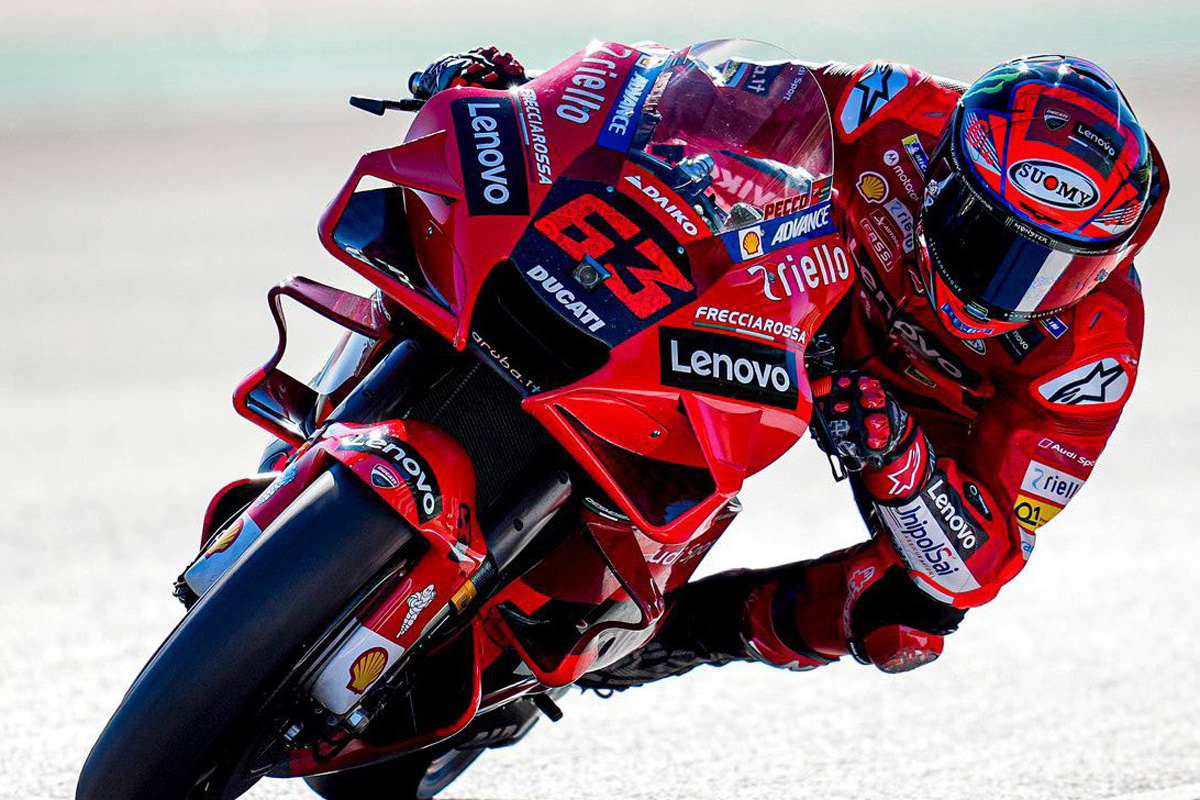 Francesco Bagnaia has capped a stunning finish to the 2021 MotoGP season by triumphing at the Valencia Grand Prix on a day where the limelight shone on Valentino Rossi.

The retiring seven-time premier class world champion started and finished 10th in the final race of his remarkable career.

A standing ovation unfolded on the warm-up lap and post-race celebrations were almost exclusively dedicated to the 42-year-old.

His compatriot Bagnaia, who had helped Rossi with slipstreams during qualifying, made it four victories in the final six grands prix of the season after overcoming pole-sitter Jorge Martin.

Off the startline, Martin made a terrific launch to hold the lead from Jack Miller, Joan Mir, Bagnaia and Alex Rins.

Miller got a good run on the impressive Pramac Racing rookie to seize the lead into Turn 1 on the second lap but things would oddly soon take a turn for the worse for the Australian.

Having been almost immediately relegated to third with Mir also sneaking by, Miller then lost another two places – to Bagnaia and Rins – the next time around.

Monster Energy Yamaha star Fabio Quartararo, who has been quiet since sealing the 2021 title, then became the next to displace Miller, although only for a handful of laps.

A little further back, Rossi’s early rise to ninth had turned to 11th at the start of Lap 9 when Enea Bastianini made use of the Bologna Bullet’s straightline speed.

‘The Doctor’ would be back inside the top 10 a couple of laps later as Rins crashed out of third at Turn 6, the Spaniard visibly furious with himself.

There was finally a change for the lead just after the midway point of the 27-lap encounter when Bagnaia stuck his #63 down the inside of Martin into Turn 14.

Miller, who had been promoted to fourth courtesy of Rins’ blunder, put Ducati in the box seat for its first ever MotoGP podium lockout with a Turn 2 overtake on Mir on Lap 19.

That historic first for the Italian marque would indeed eventuate, with the top three positions not changing from there as Suzuki’s Mir faded.

All the while, man of the moment Rossi held his nerve, hanging onto 10th amid pressure from Franco Morbidelli as emotions and tributes flowed for the #46.

In terms of the final riders’ championship order, Quartararo, Bagnaia and Mir had already locked themselves into the top three slots, while Miller did enough to hold Zarco off for fourth overall.

The last championship still to be determined – the teams’ championship – went the way of the Ducati Lenovo Team.

There will be two Australians on the 2022 MotoGP grid, with newly crowned Moto2 world champion Remy Gardner to step up to Tech3 KTM Factory Racing.