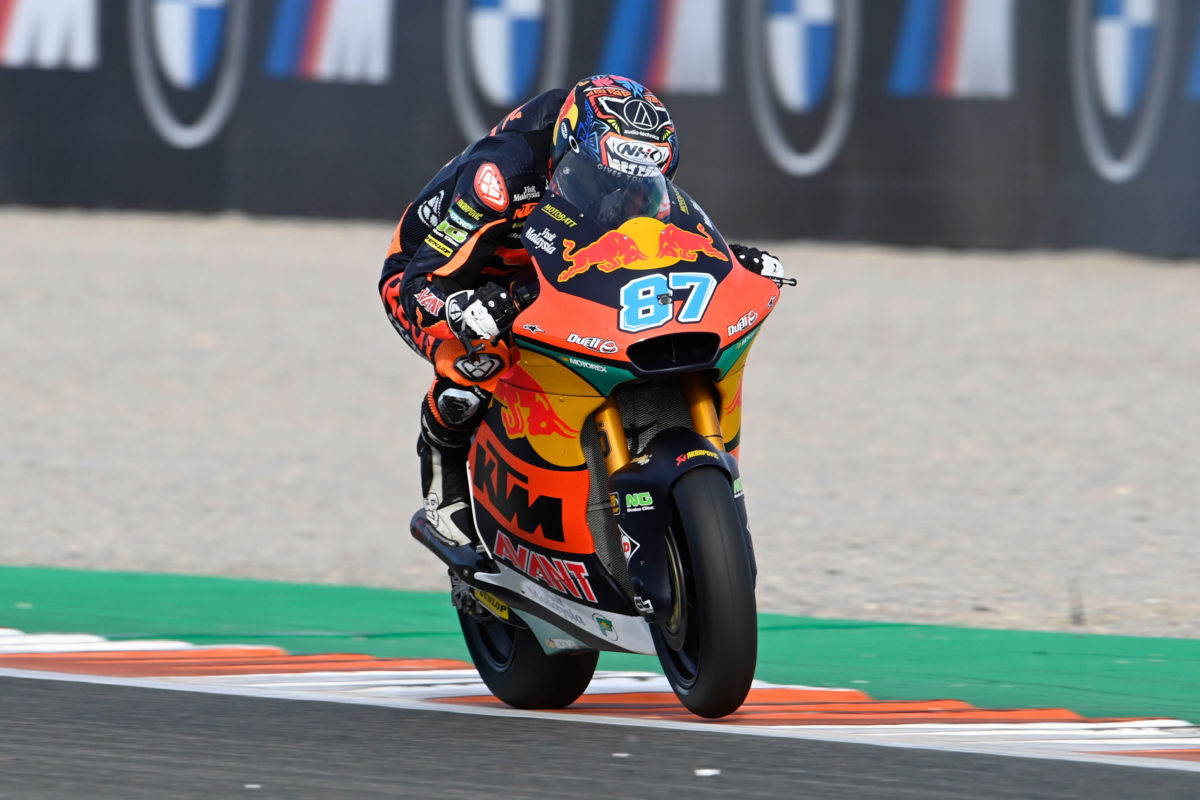 In what proved a nervous season finale for the Australian, he exceeded the minimum he needed to guarantee the crown would be his by just three positions, and that was after having to wait out an early red flag period.

Raul Fernandez simply had to win the race to give himself any chance at all of stealing the championship, and always looked a good prospect of getting that victory in the 16 laps which were run.

An upset looked quite possible when Gardner briefly dropped as far back as 12th, but it was not to be for the Spanish rookie.

A first attempt to run the race ended within a lap, when a red flag was called due to an oil spill.

The root cause was Xavi Vierge (Petronas Sprinta) going down in the pack at Turn 2 and taking out Marco Bezzecchi (Sky VR46), whose Kalex was then hit by Lorenzo Baldassarri (MV Augusta Forward).

However, the field was put back to original grid order for the restart, with the contest shortened by nine laps from its original 25.

Corsi did not even make the second start, pitting at the end of the warm up lap with an apparent technical drama, and it was Augusto Fernandez (Elf Marc VDS) who led the field to the first corner.

Raul Fernandez followed his namesake in second position, ahead of Di Giannantonio, with Aron Canet (Inde Aspar) taking fourth from Jorge Navarro at Turn 2 (Termozeta Speed Up), but Gardner emerging in ninth position.

Augusto Fernandez and Raul Fernandez were quickly involved in a dice for the lead, and exchanged position multiple times on Laps 2 and 3.

Raul Fernandez was in front when Di Giannantonio overtook Augusto Fernandez on Lap 4 at Turn 4, but then the Italian came for #25 as well.

Further back, Gardner ceded ninth position to Navarro on Lap 5 at Turn 2, and saw off one attempted pass by Sam Lowes (Elf Marc VDS) but not the second, at Turn 6.

Former team-mate Tetsuta Nagashima (Italtrans) then caught Gardner in what became a battle for 11th, but his multiple attempts to pass the Australian on Lap 9 did not stick.

Gardner then closed in on Thomas Luthi (Pertamina Mandalika SAG), and when he got back in the top 10 with a move on Lap 11 at Turn 4, he made room for Nagashima to also take 11th from the Swiss rider.

Meanwhile, Raul Fernandez continued to tail Di Giannantonio, before pulling off a block pass on #21 on Lap 13 at Turn 2.

Augusto Fernandez was still close behind in third spot, but that was how they remained until they reached the chequered flag just under four laps later.

In the end, Raul Fernandez won by half a second from Di Giannantonio, with Augusto Fernandez less than three tenths further back at the finish.

Gardner finished a full 9.1s away from the grand prix victory, but it was a sweet 10th position for the 23-year-old, Sydney-born rider.

The result left #87 with a margin of four points at the top of the championship standings, while Nagashima ended up 11th on the day.

Official pre-season testing for the 2022 campaign is set to take place at Portimao on February 19-21.

Gardner and Raul Fernandez, however, are on their way to MotoGP next year with Tech3 KTM Factory Racing.