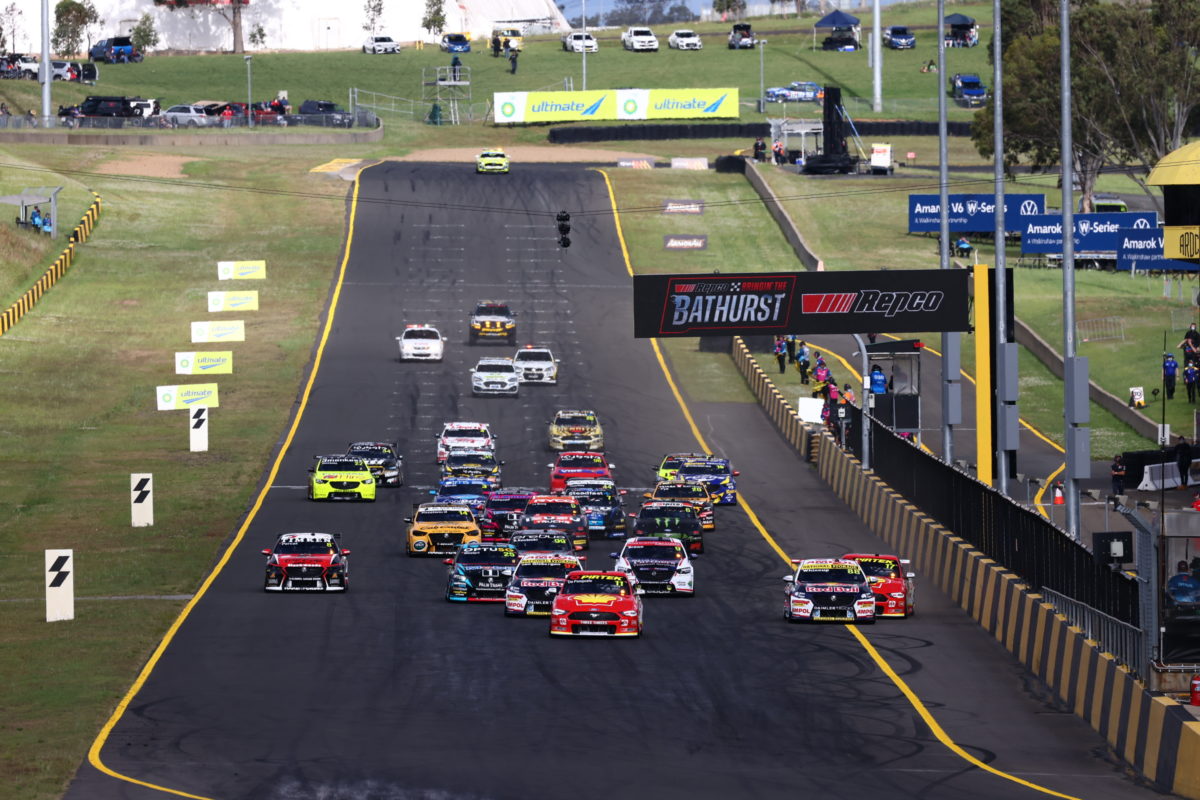 Will Davison is crowded by Jamie Whincup at the start (right of frame). Picture: Mark Horsburgh

Will Davison’s lift at the start of Race 26 is not evident of a psychological advantage enjoyed by Triple Eight’s drivers, says Shell V-Power Racing Team principal Ben Croke.

The two-time Bathurst 1000 winner chose to ease off the throttle when Jamie Whincup, who had made a slower getaway from the outside of the front row at Sydney Motorsport Park, pulled left-hand down to cover the inside line on the run to the first corner.

So far did he move, in fact, that Davison, who had qualified third, was already over the yellow edge line before his #17 Mustang made contact with the side of #88 ZB Commodore.

Whincup prevailed in that battle and it also allowed his Red Bull Ampol Racing team-mate Shane van Gisbergen to snatch third from Car #17.

That led to a suggestion in punditry that Davison had the option of turning Car #88 into the wall, and raised a question as to whether others might have stayed in the throttle.

It also unfolded against the backdrop of a long-running narrative that the Triple Eight Race Engineering drivers, or at least Whincup’s team-mate Shane van Gisbergen, are not raced hard enough by their rivals, and followed the apparent mind games instigated by van Gisbergen against Davison at the previous weekend’s Repco Supercars Championship event.

Asked if the lift was a sign Dick Johnson Racing’s drivers are being out-psyched by Triple Eight’s, Croke told Speedcafe.com, “No, not at all.

“It’s just a race start thing; not at all. Wouldn’t matter who it was; if someone’s squeezing you to the wall, you’re going to have to do something.”

Davison reasoned post-race that he needed to lift in order to avoid “a pretty big accident” and his team principal backed that position.

“Probably wasn’t the finest bit of driving I’ve ever seen from a seven-time champion,” said Croke.

“It could have ended a whole lot worse in different situations, but it wasn’t ideal; probably cost Will a spot or two there as well.

“I guess, on the starts there, people are getting better starts than some,” he added.

“You expect someone to move over but probably not as aggressive as what he did there, all the way to the wall.

“If Will didn’t lift, there’s probably a big accident with 20-odd cars behind him.”

Triple Eight team manager Mark Dutton said Whincup raced Davison as hard as he would have raced van Gisbergen, with whom he also happened to have contact as they exited the second corner of the contest.

“I only talk for our drivers but of course they’re racing hard for the win,” Dutton told Speedcafe.com.

Davison also handed over fourth position without a real fight to Erebus Motorsport’s Brodie Kostecki with less than eight laps to do.

However, there was arguably little point trying to resist then, given Kostecki had made a four-tyre stop rather than two as was the case for the DJR pilot, before striking the good fortune of a Safety Car which compressed the field.

“You’ve got four fresh tyres, pal; go and get a podium,” reasoned Croke.

As team-mate Anton De Pasquale romped to another victory, Davison would go on to finish seventh, although the other two positions he lost after the Lap 22 restart were also to drivers who had taken fresh rubber on all corners.

Nevertheless, the veteran noted post-race that he was frustrated with his pace after trying “different sort of settings” with his Mustang.

“Will’s just trying to close the gap to those in front of him,” explained Croke.

“Anton’s done a really good job on his side of the garage and they’re just trying things to make sure they get up there and we keep competing with both cars.”

Davison remains DJR’s top driver in the championship, in which he continues to hold third position, with his margin over next-best Chaz Mostert growing to 86 points.