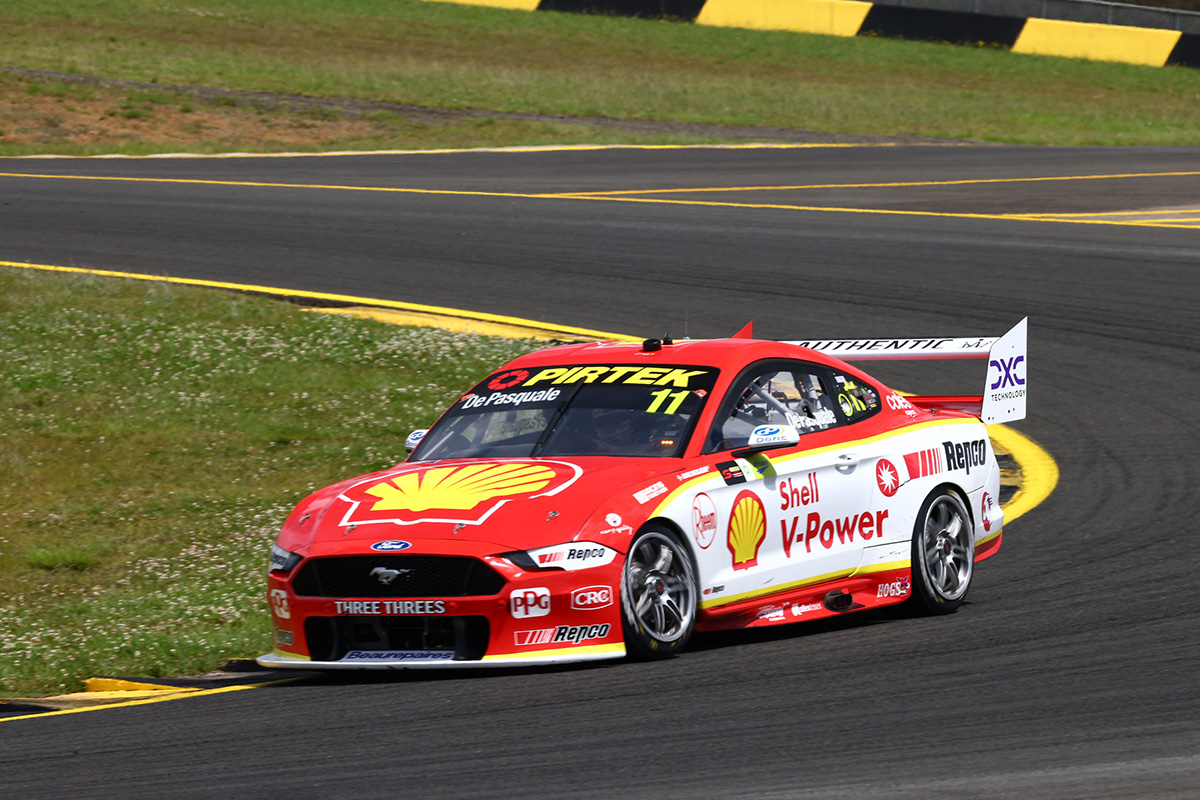 De Pasquale fell behind Shell V-Power Racing Team-mate Will Davison during the compulsory pit stop cycle but made the pass for the lead with just under 13 laps to go and disappeared from there.

Davison was shuffled all the way back to fifth in the end, with Jamie Whincup claiming a distant second and his Red Bull Ampol Racing team-mate van Gisbergen beating Mostert to third by 0.0072s after 32 laps around Sydney Motorsport Park.

Van Gisbergen had started eighth after a grid penalty for impeding in qualifying but saw his lead in the Repco Supercars Championship snipped only by six points, with the gap over Whincup at the top of the table now 343.

For De Pasquale, the win is his second in a row, and he also scooped the fastest lap bonus points as he did on the afternoon prior.

Asked post-race if he was making it look easy, he responded, “I’m glad it looks that way; it doesn’t feel it.

“It’s hard work. The cars get quite a handful after a few laps and you’re just hanging on to it.

“Our car was really good that race so I had fun, but yeah, we’ll try to do something this arvo and see what we have got.

“I don’t think we have got many tyres left but we’ll make something work.”

De Pasquale and Davison shared the front row and the Dick Johnson Racing drivers made fairly even launches, running side-by-side until De Pasquale (#11 Mustang) prevailed when he had the line for Bond Bend (Turn 2).

Davison (#17 Mustang) slotted into second, while Whincup (#88 ZB Commodore) finally made third position his own as the field threaded through Turn 05.

The rest of the top 10 at the end of the standing lap was Brodie Kostecki (#99 Boost Mobile ZB Commodore) in eighth, from Scott Pye (#20 DeWalt ZB Commodore), and Nick Percat (#8 R&J Batteries ZB Commodore).

Davison went with De Pasquale initially but was a full second back after four laps and had dropped to two seconds in arrears when he pitted on Lap 10 and took four fresh tyres.

Mostert was in for four tyres on Lap 13, as was De Pasquale from a lead of three seconds over Whincup on Lap 14.

De Pasquale took four tyres also, as he had done in Race 26 on the afternoon prior, suggesting DJR had reused some rubber on the #11 Mustang at some point in Race 27.

Either way, he resumed behind team-mate Davison, representing a swap in positions between the Stapylton cars.

Winterbottom had followed De Pasquale into the lane from fourth position, where he had apparently been holding up van Gisbergen for a number of laps.

Whincup peeled off from the official race lead on Lap 16 to take three tyres, and he resumed in fifth, behind the two DJR entries.

Van Gisbergen was the last to pit, completing the cycle on Lap 19, at which time he was also given three fresh hoops for the run home.

That put Davison into the lead, but Car #17 had by then been caught by Car #11, and De Pasquale was told by engineer Ludo Lacroix that he was “free to race”.

Whincup was third at that point, Mostert had carved his way up to fourth, and Pye was fifth, from Brown, Winterbottom, Percat, an early-stopping Jack Le Brocq (#5 Truck Assist Mustang), and van Gisbergen.

Mostert closed up to Whincup over the next couple of laps but could not find a way by, and it was instead Whincup who was pressuring Davison as the contest moved into the final five laps.

The seven-time champion showed the nose on Lap 29 at Turn 6 and Davison hung tough on the outside around Corporate Hill, before firing back down the inside at the Turn 8 hairpin.

They bumped as they ran through the final sector and Whincup finally got the move done at Turn 11, as Mostert tried to also buy into the battle.

Mostert was through at Bond Bend on Lap 30, with a small rub, but soon it became apparent that van Gisbergen, armed with his newer tyres, was going to be a threat to both of them.

The championship leader got inside of the #17 Mustang around Corporate Hill on the second-last lap and was able to criss-cross Davison off Turn 8 to make the pass for fourth position.

Meanwhile, the Whincup-Davison-Mostert fight had allowed De Pasquale to gap the field even further, and he took the chequered flag 6.0876s clear of the rest.

Whincup was by then safe in second spot, but van Gisbergen was hunting down the #25 Walkinshaw Andretti United entry.

He got a run on Mostert off the last corner of the last lap and while the 2014 Bathurst 1000 winner moved him all the way to the edge of the track on drivers’ left, van Gisbergen was able to drag past and snatch what had seemed an unlikely podium not too long prior.

Pye faded to 13th at the chequered flag but was officially classified 12th, Le Brocq finished 14th, and Cameron Waters (#6 Monster Energy Mustang) took 15th in the second of the Tickford Racing entries.