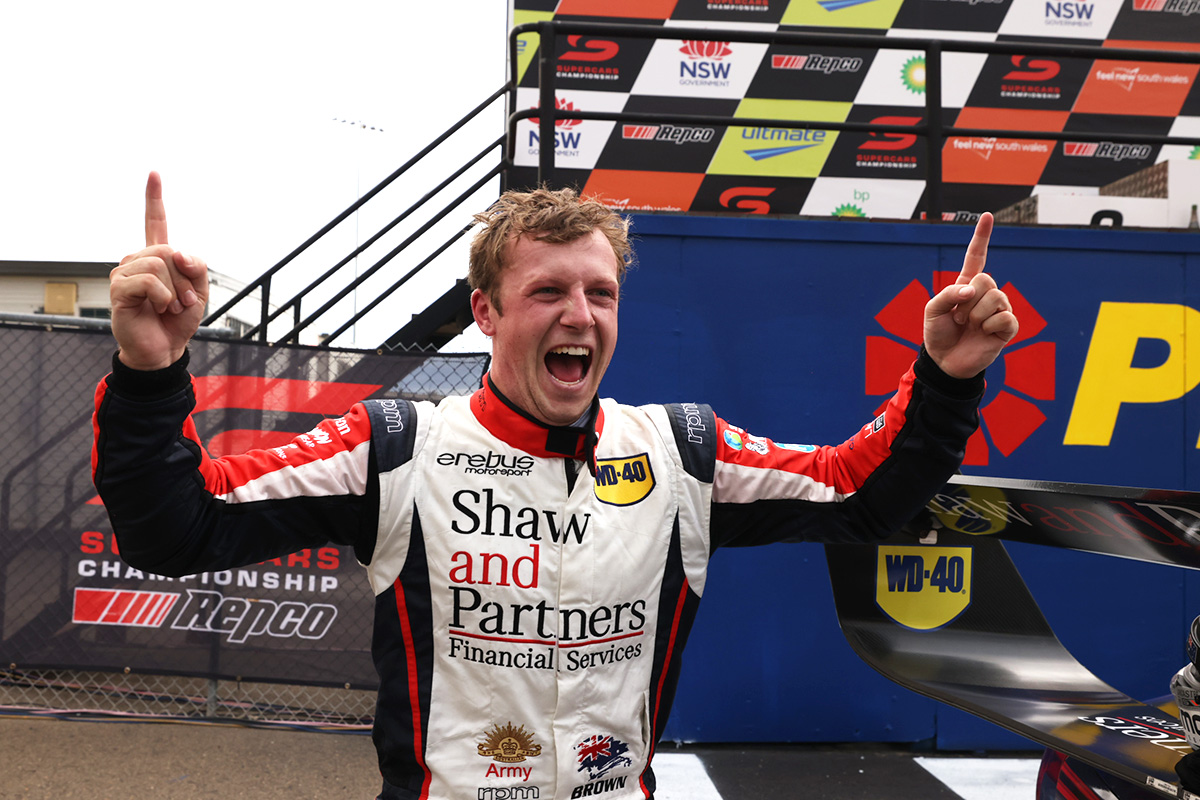 Erebus Motorsport’s Will Brown has broken through for his first Repco Supercars Championship race win as Jamie Whincup and Shane van Gisbergen clashed in the battle for the minor placings.

Barely more than half a second separated that top three after the 32 laps which made up Race 28 at the BP Ultimate Sydney SuperSprint, but Whincup and van Gisbergen gave up crucial time in the latter stages as they carved each other up over second spot.

Both of the Red Bull Ampol Racing drivers were aggravated on the radio as van Gisbergen tried to find a way through, but in the end he finished third, with Whincup claiming second spot for the second race in a row at Sydney Motorsport Park.

Brown admitted after his breakthrough, “I was sort of shitting myself a little bit when they were catching me; I thought, ‘It’s on here.’

“I thought if I can back them up into each other, they would dogfight against themselves which is what ended up happening; obviously their tyres were pretty cooked.

“The best part was just getting to do burnouts, that was sick.”

Brad Jones Racing picked up a fourth and fifth with Nick Percat heading home Todd Hazelwood, while a presumably tyre-weary Anton De Pasquale got home in ninth after winning Races 26 and 27.

Whincup had put the #88 ZB Commodore on pole position and, after catching a small movement before the lights went out, led the field to the first corner from van Gisbergen (#97 ZB Commodore).

Brown (#9 Shaw and Partners ZB Commodore) was away smartly enough when the lights went out to move across from the outside of Row 2 in time to cover De Pasquale (#11 Shell V-Power Mustang) and take up third spot.

Whincup moved to a one-second lead on Lap 5, as Brown sat close behind van Gisbergen in the minor placings, and the threat of rain to the west discouraged anyone from making an early pit stop.

De Pasquale and Chaz Mostert (#25 Mobil 1 Appliances Online ZB Commodore) were first of the front-runners into the lane from fourth and fifth respectively at the end of Lap 11, and exited the lane in the opposite order after the #11 Mustang was fitted with four fresh tyres.

Brown stopped on Lap 13 to take working side tyres, before Whincup gave up a lead of just over one second when pitted on Lap 16 for three tyres.

The erstwhile leader got up to speed behind Brown and Mostert but ahead of De Pasquale, as van Gisbergen inherited top spot.

The championship leader held first position until he also took a three-tyre stop on Lap 19 and emerged behind De Pasquale.

Van Gisbergen went down the inside of De Pasquale and into an effective fourth position on Lap 21 at Turn 4, before both he and Whincup passed Mostert on the following lap.

When Tim Slade (#3 CoolDrive Mustang) pitted on Lap 22, the cycle was done, with Brown leading Whincup and van Gisbergen, while Percat (#8 R&J Batteries ZB Commodore) soon got past both De Pasquale and Mostert to take up fourth.

It was not before long, however, that van Gisbergen and Whincup were in an almighty stoush over second position.

Van Gisbergen gave Whincup a tap at Turn 8 on Lap 23 and while he was quickly on the radio to apologise for that, he continued to try and find a way past his team-mate.

Whincup, however, was having none of it, feeding #97 wide on several occasions, including one which caused a big moment for van Gisbergen as he crossed the tunnel on Lap 24.

Brown’s margin over the two Triple Eight Race Engineering drivers blew out beyond four seconds as that went on, but once the civil war behind him calmed somewhat, Whincup and van Gisbergen began to reel him in.

Rain drops started to fall, increasing tensions about a potential extra factor to spice things up, but the battle continued to brew.

Whincup caught the #9 ZB Commodore on Lap 29 and 0.56s covered the top three at the end of that lap, but Brown clung on to pick up his first race win in what is officially his rookie season.

Will Davison got home in 12th from 15th on the grid in the #17 Shell V-Power Mustang.

The next event is the Beaurepaires Sydney SuperNight, which starts on the Friday afternoon of November 19.