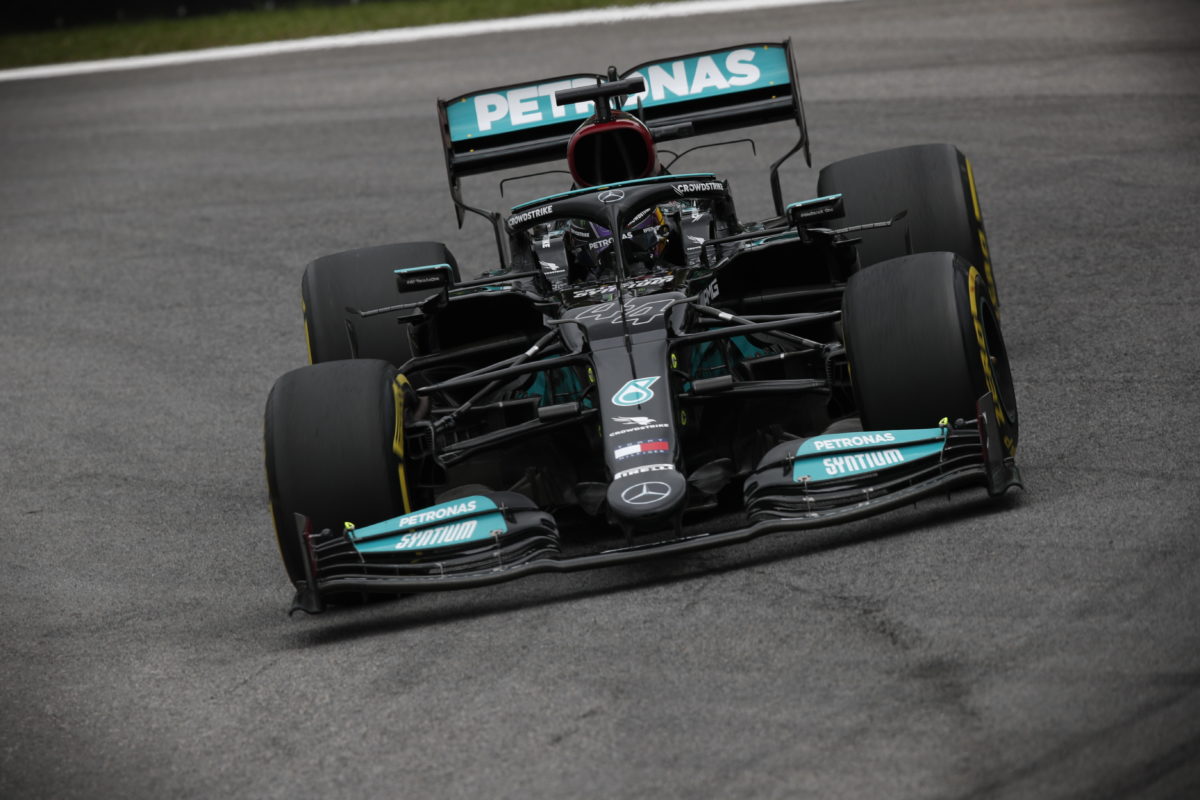 Lewis Hamilton has claimed provisional pole for the Formula 1 Sao Paulo Grand Prix to give him prime starting position for Sprint Qualifying.

The Mercedes driver topped all three segments of the session with title rival Max Verstappen to join him on the front row.

Ferrari headed the train of cars out, Carlos Sainz pipping his team-mate with their first timed laps on a 1:10.487s versus a 1:10.780s for Charles Leclerc – though that was soon deleted for track limits at Turn 4.

The early pace was some way off what was managed during simulations in Practice 1, highlighted by Max Verstappen, whose 1:09.329s left him comfortably fastest.

It was a time still 0.3s off what Hamilton had managed in the morning’s practice session when he logged a 1:09.050s.

Having kept its powder dry in the earlier session, McLaren showed its hand with Lando Norris logging the second-best time, and Daniel Ricciardo fourth.

They were bumped by Lewis Hamilton, who duly recorded a 1:08.824s to go fastest.

At the end of the opening segment, eliminated from the session were Nikita Mazepin, Mick Schumacher, George Russell, Nicholas Latifi, and Lance Stroll.

For Russell, it marked the first time in a traditional qualifying session that he’d been outqualified by a Williams team-mate.

As Qualifying 2 commenced, teams remained in their garages, emerging only with 11 minutes remaining.

When they did so it was largely in Noah’s Ark formation; Hamilton trailed by Bottas the first on track.

Having topped Qualifying 1, Hamilton had his initial 1:08.659s deleted for track limits.

Hamilton remained on track for a second effort, picking up a tow out of the last corner as he did so.

Bottas had also improved, slotting between Verstappen and Gasly to take third on a 1:08.699s.

Having circled back to the pits, the field rejoined the circuit with just under three minutes remaining, though there were no great surprises.

As a consequence, Esteban Ocon, Sebastian Vettel, Yuki Tsunoda, Kimi Raikkonen, and Antonio Giovinazzi were all eliminated from the session.

Like the start of Qualifying 2, it was a slow start to the final segment of the session.

Leclerc had been out early, the Ferrari driver on his hot lap as much of the field was trundling around on their out laps.

He managed to get by a couple of cars before recording a 1:09.403s to post the first time of the segment.

Leclerc’s initial effort left him in 10th, 0.2s slower than Daniel Ricciardo who was ninth fastest on a 1:09.200s.

With just under a minute remaining, the bulk of the field began their final flying lap.

Hamilton improved to a 1:07.934s while Verstappen was unable to match his earlier best to remain second.

Bottas was third with Perez fourth, then Gasly, the Ferraris of Sainz and Leclerc, then Norris, Ricciardo, and Fernando Alonso rounding out the top 10.

The result will see Hamilton start the Sprint Qualifying session from first, the outcome of that session to determine the grid for Sunday’s race.