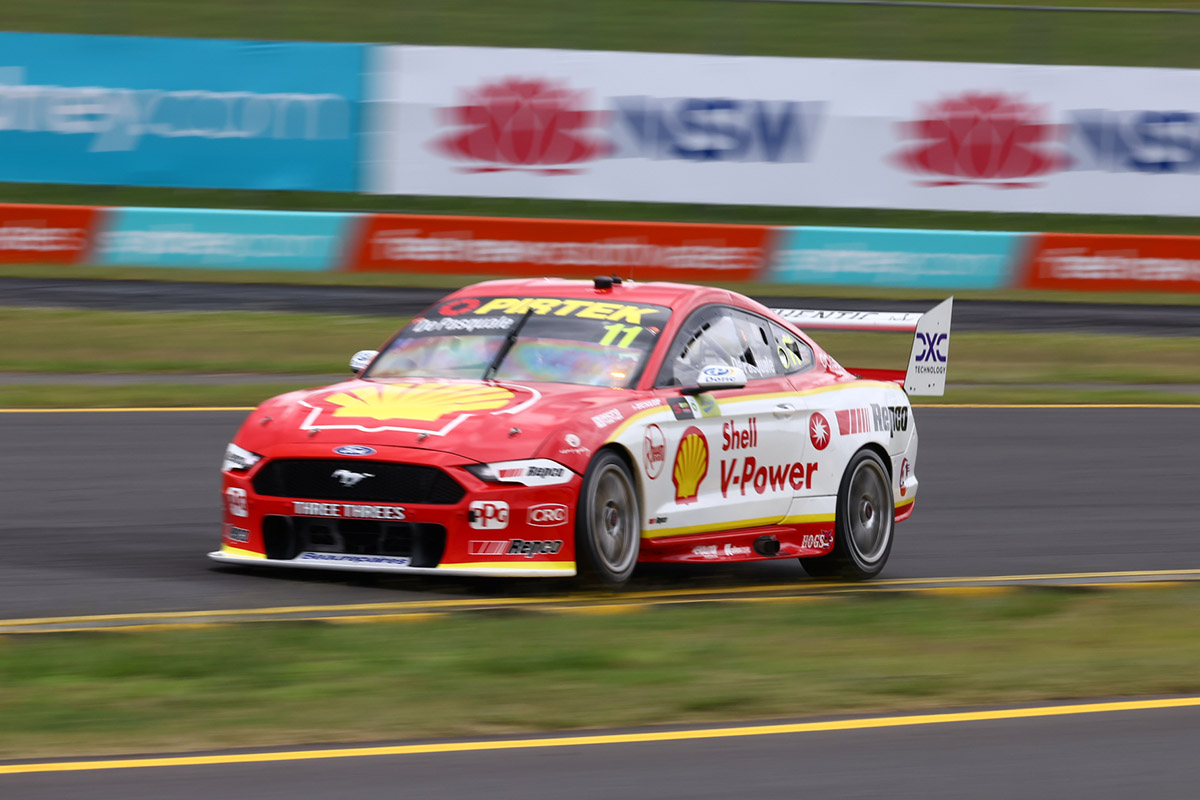 Anton De Pasquale has beaten Shane van Gisbergen to top spot in Practice 2 for Supercars’ BP Ultimate Sydney SuperSprint by a tenth of a second.

De Pasquale drove the #11 Shell V-Power Racing Team Mustang to a 1:29.2876s and therefore remains the fast man ahead of Qualifying for Race 26, while championship leader van Gisbergen jumped up the order after not using green tyres in the earlier practice session.

There remained a headwind along the main straight at Eastern Creek, although seemingly not as strong as in the preceding session, and it was van Gisbergen’s Red Bull Ampol Racing team-mate Jamie Whincup who was fastest early with a 1:29.9484s.

That was the benchmark until Will Davison (#17 Shell V-Power Mustang), who initially went for an installation run, set a 1:29.8865s on his first run proper in the 30-minute hit-out.

For his second run, De Pasquale (#11 Mustang) was sent out on the tyres on which he completed his Practice 1 qualifying simulation, and took over top spot with a 1:29.7904s.

Triple Eight Race Engineering held van Gisbergen in the garage for some time before sending him for back-to-back runs on his practice handback tyres to end the session.

The 2016 champion was all the way back in 23rd until he bettered everyone with a 1:29.7588s in the 21st minute, before the rest of the field joined him on new rubber for the final salvos.

Despite reporting a transaxle issue which requires a post-session change, Erebus Motorsport’s Brodie Kostecki (#99 Boost Mobile ZB Commodore) rolled out a 1:29.6060s in the final minute, before De Pasquale set the 1:29.2876s, approximately 0.15s quicker than he went in Practice 1.

Van Gisbergen snuck in a 1:29.3917s in the last few seconds before the chequered flag to slot into second, shuffling Davison back to fourth after the Dick Johnson Racing pilot had moved to a 1:29.7062s.

Asked if he had anything more for De Pasquale, van Gisbergen said after hopping out of the #97 ZB Commodore, “I hope so; we’ll certainly try.

“We’ve got some things we were trying then and maybe it was better, but he has been awesome in quali so if we’re matching him, we’re doing a good job.

Erebus’s Will Brown (#9 Shaw and Partners ZB Commodore) had made a small error on his first green tyre hot lap but still managed a 1:29.7279s with the chequered flag out at his second effort.

Whincup (#88 ZB Commodore) recorded a track limits breach while on a quick lap at the end and, with no advance on his first run, ended up ninth-fastest, one position ahead of Bryce Fullwood (#2 Mobil 1 Middy’s ZB Commodore).