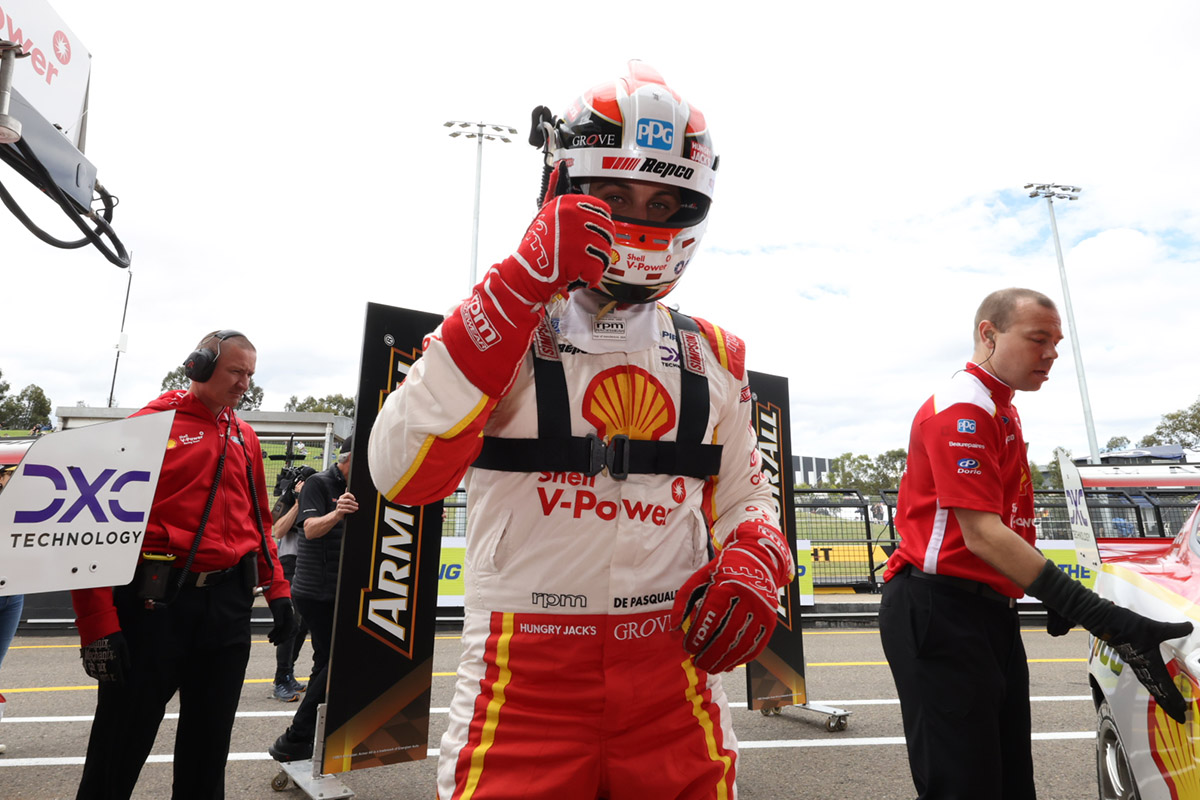 Anton De Pasquale has blazed to a ninth pole position of the 2021 Repco Supercars Championship, ahead of Race 26 at Sydney Motorsport Park.

Row 2 for this afternoon’s 32-lapper will look much the same, with Will Davison in the #17 Shell V-Power Mustang starting to the inside of Shane van Gisbergen in the #97 Red Bull Ampol ZB Commodore.

Said De Pasquale after the session, “The car is in a pretty good window.

“It’s obviously a fast car and I enjoy driving it, so it’s cool when you get to lay it on the line for a lap.

“Obviously, we’re in a good position for the race so we’ll try to convert it later this arvo, but yeah, so far, so good.”

Qualifying for Race 26 came down to single-lap efforts for each of the top 10 drivers who made it through to the final phase of the knockout session, which was run under cloudy skies.

Will Brown was one of only two on-track in the opening minutes, and the only one to set a time, when he drove the #9 Shaw and Partners ZB Commodore to a 1:29.1398s.

Brown was thus shuffled back to fifth and will be joined on Row 3 by Walkinshaw Andretti United’s Chaz Mostert (#25 Mobil 1 Appliances Online ZB Commodore).

Hazelwood was one of the initial eight to set a lap time and while he did not improve on his second run, the 1:29.4449s which he had already banked got him through in 10th.

Jack Le Brocq (#5 Truck Assist Mustang) ended up 11th after being bumped late by Hazelwood’s team-mate Percat, and will be joined on Row 6 by Bryce Fullwood (#2 Mobil 1 Middy’s ZB Commodore).

Part 1 saw De Pasquale immediately better his fastest lap of the day to that point, and thus everyone else’s, with a 1:29.0278s.

Only 20 cars went out initially and the top 10 after that running, plus Slade in 12th, put their cue in the rack.

The four who had waited, namely Waters, Courtney, Mostert, and Fullwood, all made the cut, and Slade had done just enough to survive in 20th.

First on the outside was Fabian Coulthard (#19 Local Legends ZB Commodore) after being bumped by Team Sydney team-mate Jacobson.

He will share Row 11 with Jake Kostecki (#34 Unit ZB Commodore), while Luke Youlden (#26 Penrite Mustang) is set to take up 23rd on the grid and Jack Smith (#4 SCT Logistics ZB Commodore) 24th.