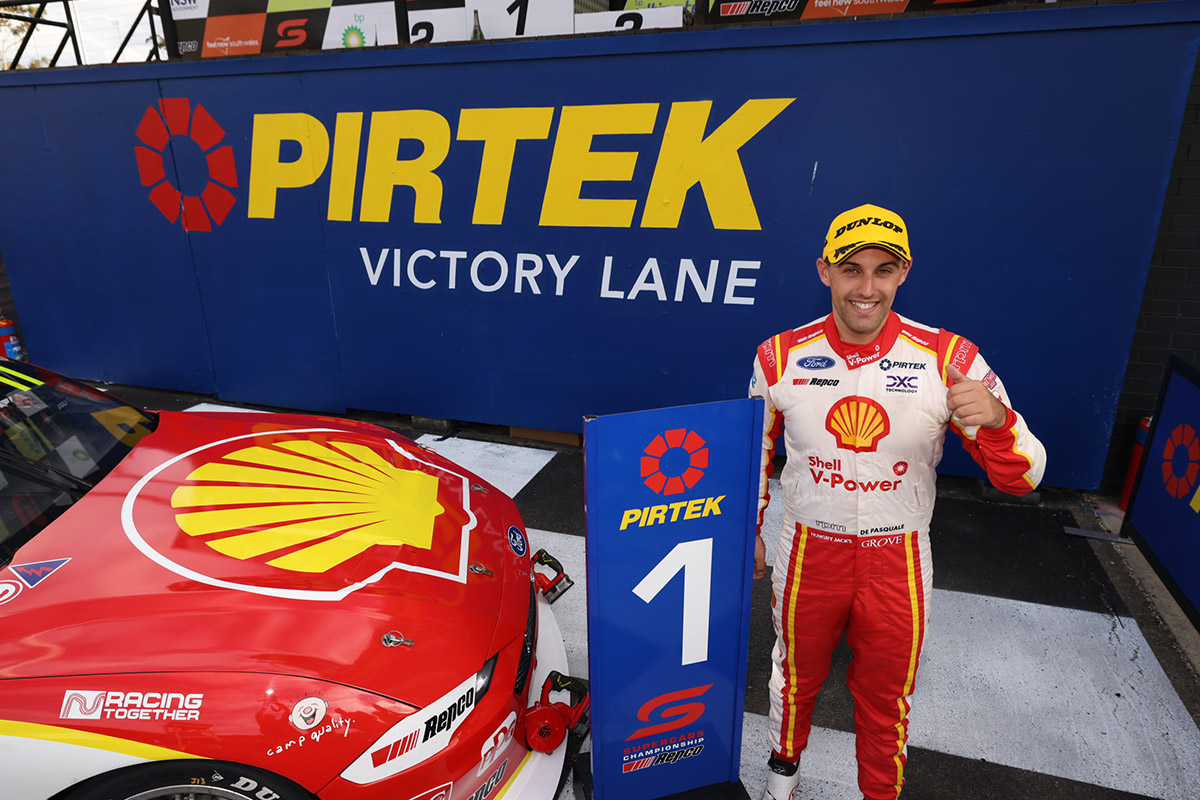 Anton De Pasquale has overtaken Shane van Gisbergen to win Race 26 of the Repco Supercars Championship in a battle of contrasting strategies at Sydney Motorsport Park.

De Pasquale led until his compulsory pit stop but ceded track position to the championship leader when the Shell V-Power Racing Team opted to throw four fresh tyres at his #11 Mustang.

However, he got back in front of van Gisbergen almost as soon as the Red Bull Ampol Racing driver had stopped for just two tyres, and that was decisive.

In the end, De Pasquale took victory in the opening race of the BP Ultimate Sydney SuperSprint by a margin of 1.8912s from van Gisbergen.

Erebus Motorsport’s Will Brown secured the final podium place, despite a slow service when he too took four tyres.

“It’s the fastest way to the end,” said De Pasquale of his strategy.

“We were pole, leading the race, you don’t want to throw it away so we’ll take the wins where we can get them.

“We’ll find out how that works tomorrow but we’re happy with the win. If you get one of those a weekend, you’re going good.”

With Jamie Whincup finishing fourth in the other Red Bull Ampol Racing entry, van Gisbergen’s margin at the top of the standings is now out to 349 points.

Upon lights out at the start of the 32-lap contest, De Pasquale showed a clean pair of heels from pole position, while there was contact when Whincup (#88 ZB Commodore) moved across from the outside of the front row to cover second-row starter Will Davison (#17 Shell V-Power Mustang).

The hit helped van Gisbergen (#97 ZB Commodore) scythe past on the outside and slot into third, while Chaz Mostert (#25 Mobil 1 Appliances Online ZB Commodore) took up fifth, behind Davison.

De Pasquale gradually crept away in the opening stages, and had pulled a gap of more than two seconds when Whincup appeared to let his Triple Eight Race Engineering team-mate van Gisbergen through on Lap 8 at Bond Bend (Turn 2).

Meanwhile, Mostert had been tailing Davison, and that remained the case even when they filed into pit lane together on Lap 10, each for a fresh set of working side tyres.

Mostert was slightly slow from the drop and Waters, who pitted five laps earlier from 10th position, was able to split them upon rejoin.

Whincup had drifted to about 1.8s when he stopped on Lap 11 for working side tyres, before Mostert muscled his way past Waters at Bond Bend on Lap 12 in the effective battle for fifth.

De Pasquale was 3.1s to the good when he pitted on Lap 16, with Dick Johnson Racing opting to put four fresh tyres onto the #11 Mustang.

He resumed between Whincup and Davison but was able to clear the former as soon as they went through Turn 9 on his out lap.

Triple Eight called van Gisbergen into the lane next time around and he was similarly able to exit the pits ahead of Car #11, given he only took working side tyres.

However, De Pasquale was quickly sweating on Car #97 and pulled off a carbon copy of a move on Lap 18, by getting a better run off the Turn 8 hairpin and then driving down the inside at the left-hander which followed.

That only put the DJR pilot into the effective race lead, but it was officially his next time around when Bryce Fullwood (#2 Mobil 1 Middy’s ZB Commodore), who had not yet pitted, stopped on-track as the end result of an early-race alternator failure.

Brown was only 12th at that point, after the Erebus crew took a second go at tightening the left-front during his compulsory pit stop.

When the race restarted on Lap 22, De Pasquale set the fastest lap to bolt a full 1.8s clear of van Gisbergen after just the one, 3.91km tour of Sydney Motorsport Park.

Behind him, there was a messy scrap over sixth through 10th which saw Waters turned into the wall by Tickford Racing team-mate Le Brocq after nose-to-tail contact from Hazelwood had pushed his #6 Mustang wide off the Turn 8 hairpin.

Waters managed to drive back to the pits while Le Brocq would be issued a drive-through penalty for his part in the incident.

Brodie Kostecki had risen to fifth amid all of that, before he lunged down the inside of Davison at Turn 5 on Lap 25.

Brown soon also cleared the #17 Mustang and the Erebus duo went after Whincup, who was still running third.

Kostecki caught Car #88 on Lap 27 but when he could not find a way by, he moved aside and let Brown have a crack instead.

The man in Car #9 was able to profit, slicing down the inside of Whincup on Lap 30 at Turn 6.

De Pasquale, meanwhile, continued to circulate around two seconds in front of van Gisbergen, and not only took victory but also the five bonus points for the fastest lap.

Van Gisbergen greeted the chequered flag about 1.5s up on Brown, while Whincup held on for fourth and Brodie Kostecki was therefore fifth all-told.

Mostert ended up 11th, from Hazelwood and Winterbottom, with Le Brocq the last car on the lead lap in 20th.

The latter was the best of the Tickford trio, with James Courtney (#44 Boost Mobile Mustang) 21st after being turned around exiting the first corner of the race and Waters salvaging 22nd.

Pye and Slade were investigated over a Lap 1 incident that saw Courtney spin, but ‘no further action’ was the decision from officials.

Percat was a classified finisher at seven laps down after a suspected broken bolt in the front suspension of Car #8 and a drive-through for an unsafe release at a later pit stop, while Fullwood was the only DNF.

There will be a post-race investigation into Luke Youlden (#26 Penrite Mustang) and Jack Smith (#4 SCT Logistics ZB Commodore), following the latter’s spin after the Safety Car period.