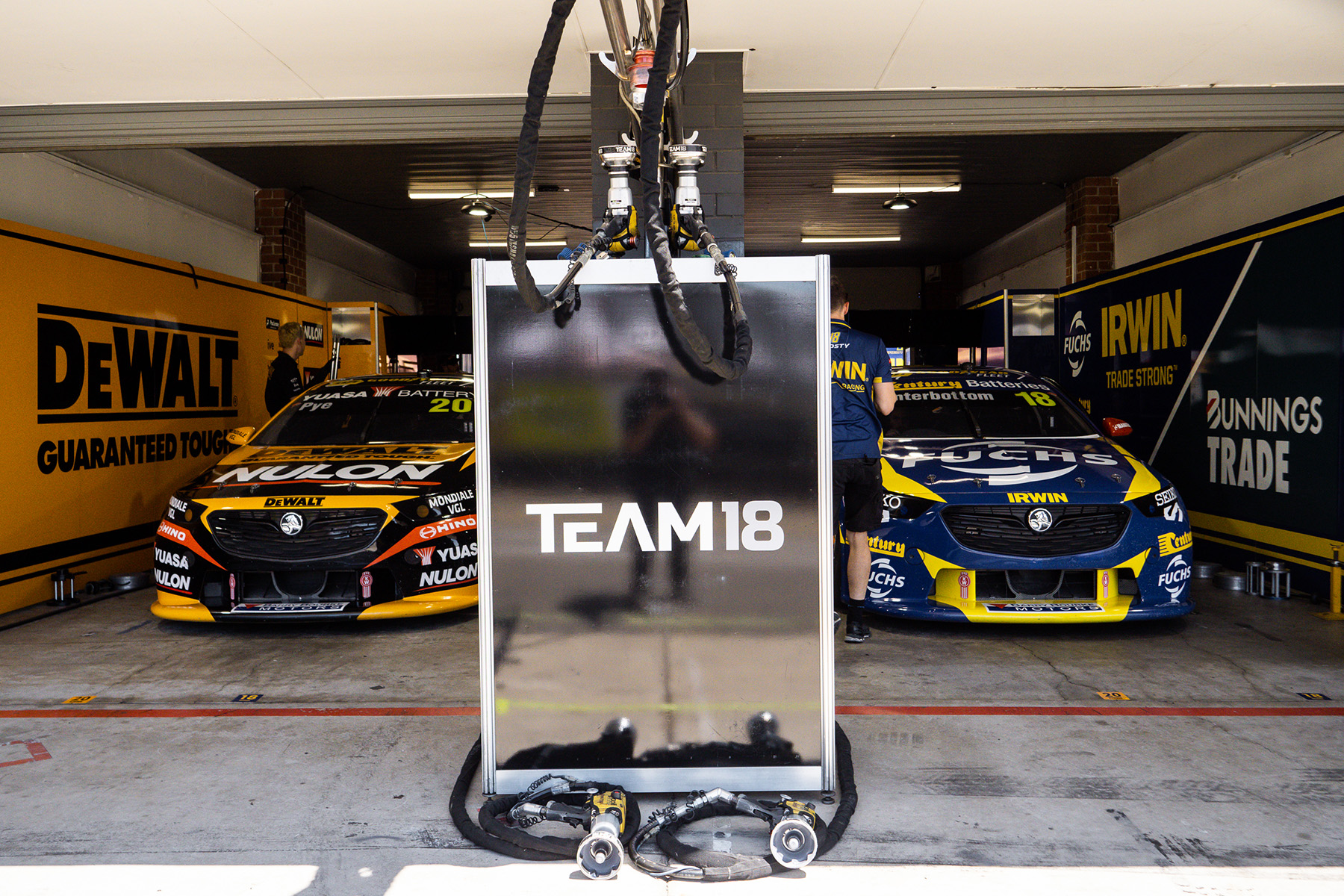 The Team 18 ZB Commodores of Scott Pye and Mark Winterbottom

Upon investigation, it was found the Mount Waverley team had suffered a seal failure on both cars.

Similarly, Matt Stone Racing’s Jake Kostecki would fall victim to a power steering problem early in Race 25, which relegated him to the pit lane.

While both teams suffered issues within a day of each other, Triple Eight team manager Dutton confirmed to Speedcafe.com the dramas were unrelated.

“We’ve just had a few oil leaks or seals go in the power steering racks, and it’s only at certain tracks,” Schwerkolt told Speedcafe.com.

“Really, really high-pressure circuits, and one of them is Sydney Motorsport Park. Obviously up at the Grate at Bathurst and a few places like that where the pressure is really, really big.

“You just get some oil leaks out of the seal. We’re under control with it, it’s not ideal, but we’ve just got to work through it. It always happens at the most inopportune time.

“We’ve got a good relationship with Triple Eight. They build all our racks and it’s a full service programme. We just go and get another rack. Hopefully we can completely get on top of it.

“It’s more of a pain in timing in between sessions changing racks.

“We’ve had a few go at Sydney in the last couple of rounds, so hopefully we’re okay now, but it’s something we monitor and make sure it’s okay.”

However, it was a case of bad timing as they discovered the lifetime of that fix early on in the last of the 32-lap races at SMP2.

“We haven’t really had many issues this year because we’ve tweaked a few things that seem to have fixed it,” said Matt Stone of their issues.

“A part of that meant we had some new parts in the system and we just had a fitting crack on one of the new parts that caused it to fail. So we came in, replaced the fitting, and carried on.

“I think the other guys are having more steering rack or pump issues, whereas ours, we seem to have gotten away from the issues of the racks and pumps fail, touch wood. We did it by adding in some different componentry and that’s what caused our failure.

“I think theirs were all related, whereas ours was different. We don’t seem to still be having the constant issues those guys have because we’ve tweaked the system slightly. But in saying that, the component we added has ended up failing.

“That’s just a new part that we weren’t aware of what the life needed to be on it and we unfortunately learnt that on the weekend.”

He explained that componentry supplied to its customer squads is identical to what is run on his own squad’s cars.

While there were no concerns on the #88 or #97 entries, Dutton said he takes the issues of other teams seriously.

“As for issues, we didn’t swap any racks,” said Dutton.

“We didn’t do any work on the steering on either of our cars. We run the exact same stuff as Team 18 for example.

“When they borrow components or racks or steering mounds or pumps or anything like that, it’s our spares. There’s no difference between any of the components there. So it’s really just trying to understand when they have an issue what has caused that issue.

“I thought they had a little weeping issue, which as I said, that’s not a known flaw or problem, that’s just a fact of seals leaking or weeping and we’ve got to understand whether it’s been damaged on assembly from us.

“We pressure test everything, so that shouldn’t be the case and we’re pretty confident of that. Is there an installation issue in the cars? Because everything has such tight tolerances, when other components wear you’ve got to be careful that they don’t then have a flow-on effect to the steering.

“We gave them our spare mounts on the weekend just to check for them that there wasn’t an issue on their components that was causing a knock-on effect.

“We definitely don’t dismiss it as, ‘Oh that’s part of life’, 100 percent not. It’s things we work with our engineers and guys in sub assembly to understand what has cause the issues so we can help them rectify it. You work hard to make sure it doesn’t reoccur.

“We’re using the exact same components. If there’s any sort of fault, we should have them as much as them.

“But no, for sure, power steering is a tricky system. One installation you’ve got to make sure it’s bang on and the bleeding procedure is followed to the letter. It is a tricky process. You’d love for it not to be, but it is.”