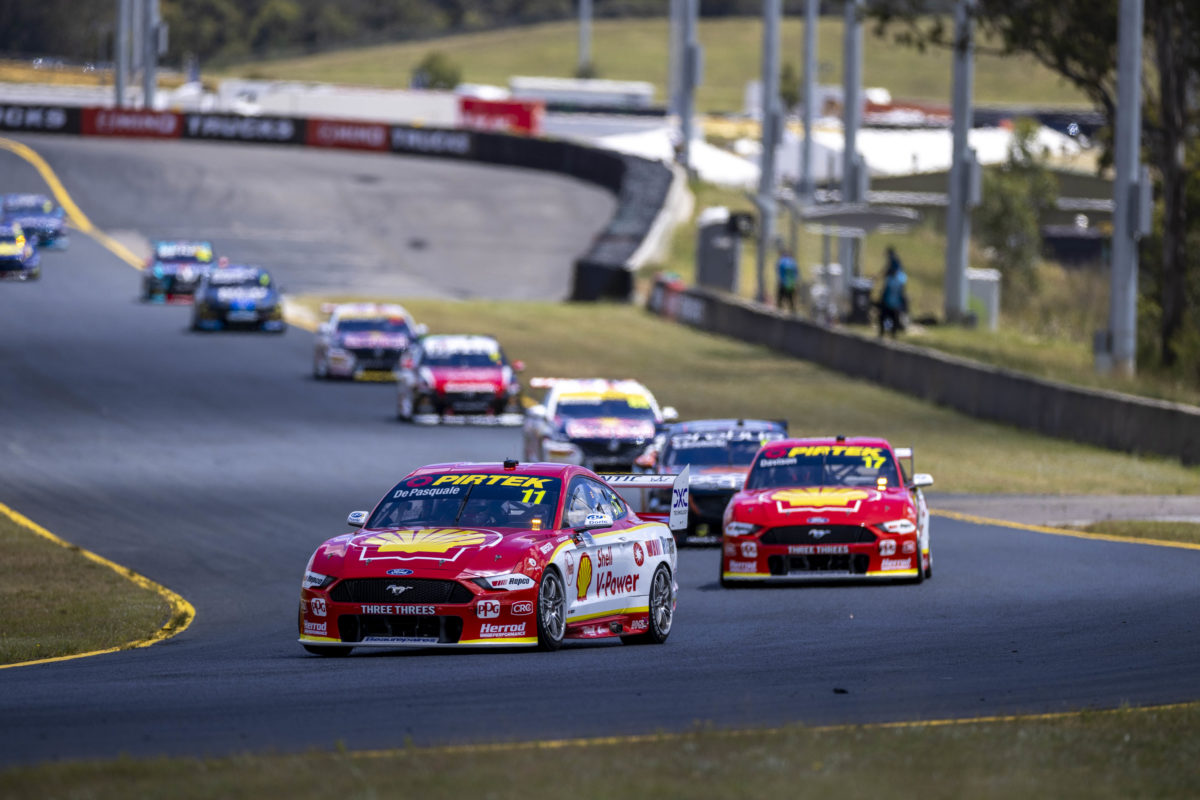 The Shell V-Power Racing Team is seeking more gains this weekend at Sydney Motorsport Park, where its “good car” has been the fastest in the Repco Supercars Championship of late.

Anton De Pasquale has been the man to beat in the first two events at Eastern Creek, driving the squad’s #11 Ford Mustang to three races wins and four pole positions out of a possible six.

However, Dick Johnson Racing is not resting on its laurels ahead of a third straight weekend of racing at the same circuit, says team principal Ben Croke.

“We’ll make changes during the week – we always try to improve our car – and we’ll work hard, try and come out and make it fast,” Croke told Speedcafe.com.

“[We’ll] Try and make the bad one fast as well so we can get a front row lockout like we did on the first weekend in qualifying.

“[We’ll] Just keep focusing on doing a good job and executing, [make] a few small changes, and looking forward to being back here next weekend, to be able to do the racing and fulfil the series.”

The ‘bad one’ reference is a sarcastic comment following on from a spicy end to proceedings on the Saturday night of last weekend’s Armor All Sydney SuperSprint.

Will Davison had taken DJR’s #17 Mustang to a third placing in Race 23 but vented his frustrations on live television about what he felt were some opening-lap antics from Shane van Gisbergen, who had taken victory.

His anger would grow in the press conference which followed when van Gisbergen gave an interesting qualifier to one of his answers.

In response to a general question about the weekend’s Formula 1-style tyre regulations, the Red Bull Ampol Racing driver explained that he was still not sure where he stood on car pace given “the good DJR car wasn’t up front”.

While van Gisbergen claimed that what he said “came out wrong”, Davison’s reaction was one of affront.

It led race runner-up Jamie Whincup, van Gisbergen’s team-mate but also a friend of the DJR driver sat on the opposite side of the desk, to apparently try and seek calm by interjecting, “It’s actually a compliment, Davo, it’s a compliment.”

From that, it can reasonably be inferred that the two Triple Eight Race Engineering steerers are of the opinion that DJR not only has a ‘good car’, but also a ‘bad car’, and it would not be the first time either has made a comment of that ilk, explicitly or otherwise.

Last year at Townsville, for example, Whincup spoke glowingly of Triple Eight’s genuine two-car ethos in comparison to a “one-plus-one” situation at some unspecified outfit, which most interpreted as a shot at DJR Team Penske.

According to Croke, Davison’s and De Pasquale’s cars are quite similar.

Asked if their driving styles differ, he explained, “Only slightly; little different bits and pieces but other than that, they’re similar-ish.

“The cars are very similar, even now, so I think someone’s playing games there,” he added, alluding to van Gisbergen.

Ironically, it is Davison who is in fact second and De Pasquale third in the Beaurepaires Sydney Cup, the series within a series encompassing the quartet of events at Sydney Motorsport Park.

That can be explained largely by De Pasquale suffering major misfortune in each of the two Sydney Cup weekends so far, namely a disqualification from one race due to a tyre mix-up and an early transaxle failure in a qualifying session.

Also, as Croke noted, the veteran was part of a front row lockout for Race 21 of the season, the middle race of ‘SMP1’, from which he would take the lead courtesy of a good getaway when the lights went out.

Davison then had to cop his own bad luck, namely electrical gremlins which took away his dashboard.

He managed to stay in front of van Gisbergen until they pitted together, when the margin for error left due to having no knowledge of pit speed ultimately saw them swap spots and remain that way until the chequered flag.

That second placing is Davison’s best result of the Sydney Cup to date, but he is only 28 points behind van Gisbergen after the championship leader dropped a big bunch of points in the most recent race, and 17 ahead of De Pasquale.

The 2016 Bathurst 1000 winner has also moved up to third in the championship in recent times, and now sits 112 points behind Whincup, with another 915 still on offer this year.

Asked what chance of Davison taking over second spot from the seven-time champion, Croke responded, “Plenty.

“We just keep working hard here and trying to keep the momentum that we’ve got.

“We’ve got really good cars, the crew here are doing a really good job, and if we just execute the best we can for these next couple of weekends, if that happens, then that’s great, it’d be fantastic.

“But, the focus for us is to just keep executing, keep the forward momentum, and try to keep getting on the podium and getting wins.”

Whincup no longer believes himself a chance of beating van Gisbergen to the title, given the 337-point margin between the two, although Croke is not so sure that #97 is too far away.

“It’s starting to head that way, but never say never,” he remarked.

“He’s still only one bad weekend away from someone closing the gap.”

The BP Ultimate Sydney SuperSprint takes place at SMP from this Saturday.