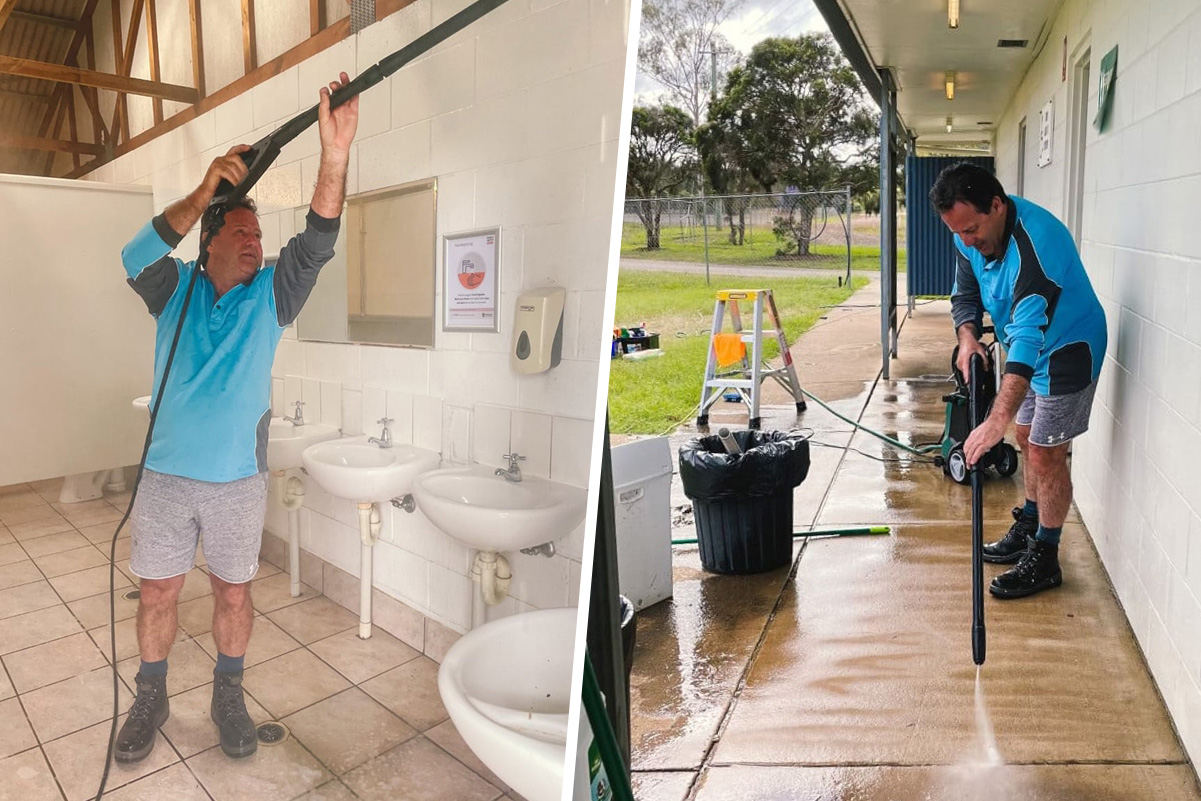 Tony Quinn getting down and dirty. Picture: Queensland Raceway

Just days after sealing the deal to take over the operations of Queensland Raceway, Tony Quinn has got to work on bettering the basics of the Ipswich circuit.

The multi-circuit owner recently revealed to Speedcafe.com his grand plans for the facility, which includes a raft of upgrades to facilities.

However, for Quinn, it’s much a case of getting the fundamentals right before building new infrastructure.

As such, the businessman started with where he thinks is most important; the toilets.

Quinn is a self-confessed clean freak who prides himself on the cleanliness of his facilities, whether that’s one of his race tracks or his beef jerky factory.

Ultimately, he wants his name associated with a circuit that users will enjoy not only for the bitumen but everything that surrounds it.

“Queensland Raceway, I want to improve the facility immensely and give the people of South East Queensland a racetrack that they can be proud of,” he told Speedcafe.com.

“I’m coming back next Friday and on Saturday, I’m going to be there cleaning toilets,” he said in an interview last week.

“I know I’m gonna f***ing demolish them or totally renovate them, but that won’t happen until closer to Christmas.”

Renovating the toilets and cafe as well as providing users with adequate shade are in Quinn’s short-term plan before making changes to the track layout and upgrading the pit facilities.

“It’s fine if you’ve got decent toilets, somewhere to get decent food from, and a bit of shelter from the midday sun,” Quinn explained.

“Then I think we’re getting to the point where we can actually then start improving or then start developing for the future, whatever that may be.”

At 64 years old, Quinn is showing no sign of slowing down.

Earlier this year he bought a majority stake in Triple Eight Race Engineering.

Within days of each other, Quinn did deals to acquire Queensland Raceway and New Zealand circuit Taupo Motorsport Park.

Quinn’s affinity for toilets is somewhat well-known having earlier this year unveiled his quirky ‘Loo with a View’ which overlooks Highlands Motorsport Park.

“As you get older, you think of two things when you get up; what’s for breakfast, where’s the toilets,” said Quinn.

“But as I’ve travelled around the world, I’ve discovered you can tell the tone of a country by the toilets.

“English motorway toilet; no one cleans it, no one cares about it, whoever was the last man in – ‘I didn’t f***ing do that’ – you’re embarrassed when you leave. French toilets are different. They’re very sociable, strangely so.

“German toilets, I like German toilets. They’re clean all the time. There’s this clamp thing that comes down. The toilet bowl is a funny shape. It’s kind of round, not oval. The seat around this clamp and it’s cleaning the rim. It’s 50c Euro. I said to my dad, ‘You’ve got to go in and see these toilets!’ Germans, I like the Germans.

“Dubai. What do you do with the hose? F*** me. I don’t know what to do with that. Japan! They’re the best toilets. F***ing awesome. The first time you’re in there it’s weird, but once you’re done… f*** me. The last thing you do when you’re at the airport is go to the toilet.

“In Australia and most countries you get this pond of water to aim for to help the system. In America, they give you a lake in the bowl. The water fills the thing. It’s strange. You think it’s blocked, but it’s not, it’s just the way it is.

“Then when you flush it, it’s like a spring reaction. Woosh! It’s gone to Mexico. Like when you go on an aeroplane. Same kind of thing. F***ing gone. You don’t get it back. If you drop a fish or a wedding ring, it’s gone. Not a chance.

“Anyway, New Zealand. Probably some of the most practical toilets in the world. Every cafe, every village, every town has got public toilets that are clean and well maintained and just very comfortable. Perfect. Probably what God would have designed. Practical, fit for purpose. Job done.

“Australia. Well. Some of the public toilets are alright and some of the newer ones are acceptable. Every cafe in New Zealand has got its own toilet. In Australia, they give you a key on a spade so every f***er knows you’re going to the toilet. It’s a walk of shame. ‘Yeah, I’m going to the toilet’. Then you go up and around the corner and you’ve got this big f***ing thing with a spoon on it. Really? In this day and age, we shouldn’t have to put up with that.

“There’s no reason I can see why people should use a facility like that. It’s just wrong. So, my fascination with toilets is, I believe, well researched.

“That’s all you think about. It’s all you can think about. Because you lose track. You might be thinking of something… but then the thought of a toilet overpowers you and you have to go. Then you’ve forgotten what the f*** you were doing.

“So food and toilets become the things that are constant. It’s a default.”