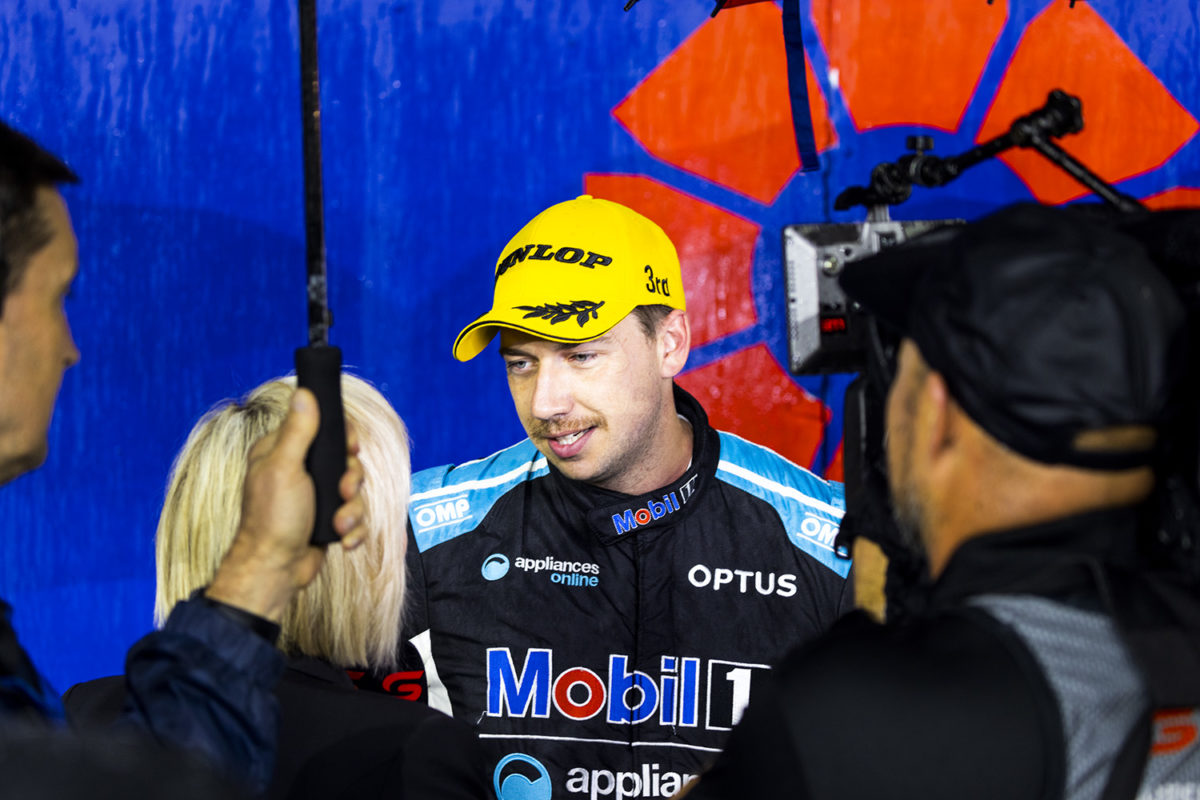 Mostert qualified second-fastest for Race 25 at the Armor All Sydney SuperSprint but was disqualified from the session due to a technical breach, meaning he started at the back of the 26-car field.

Despite rain falling throughout the race, most of those 23 positions were gained on merit, as opposed to merely profiting from a succession of calamities ahead.

He was around four seconds behind Anton De Pasquale with as many as 12 laps remaining based on the schedule of 32 laps, although a Safety Car would be called on Lap 21 and that would turn into a red flag from which the contest would not restart.

“It was a night of highs and lows, and in the spirit of entertainment, I think it was probably great watching for the fans, which was super-important,” Stewart told Speedcafe.com.

“From a team point of view, I’m very proud of my team to show resilience through adversity.

On Mostert’s drive, he added, “Amazing; Chaz’s drive was inspirational, the pit crew did a great job, and again, it just shows that with a really strong team, you can show resilience and get half a result, which was really good.

“I felt we were going to be in it at the end, which would have been really exciting.”

In the two dry encounters, Mostert finished 14th from 14th on the grid in Race 23 on the Saturday night, having tried to reuse soft tyres early in that qualifying session, and eighth from third in Race 24 on the following afternoon.

The latter saw him start on hard tyres and thus quickly slip down the order, before clawing back significant ground with the fastest lap of the race along the way, early into Car #25’s soft tyre stint.

WAU’s other full-time driver, Bryce Fullwood, showed speed as well, beating Mostert by a position in Qualifying for Race 23, joining him on the second row for Race 24, and qualifying ninth-fastest before his team-mate’s disqualification from the session which set the grid for Race 25.

“I thought we showed that we developed our cars significantly,” said Stewart.

“We had four top 10 qualis [on Sunday, unofficially] and a super-fast race car for both drivers at different times, so I’m excited.”

The young Territorian is on the move at year-end after WAU secured the services of Nick Percat from 2022, but leaves Clayton on good terms and earned praise from Stewart for his “super-exciting” drives.

“The young man has great talent and I’m just rapt that he gets to show everyone and display why we really enjoy having him in the team,” he remarked of Fullwood.

Mostert is fourth in the championship and Fullwood 17th ahead of the BP Ultimate Sydney SuperSprint, which starts this Saturday, November 13.