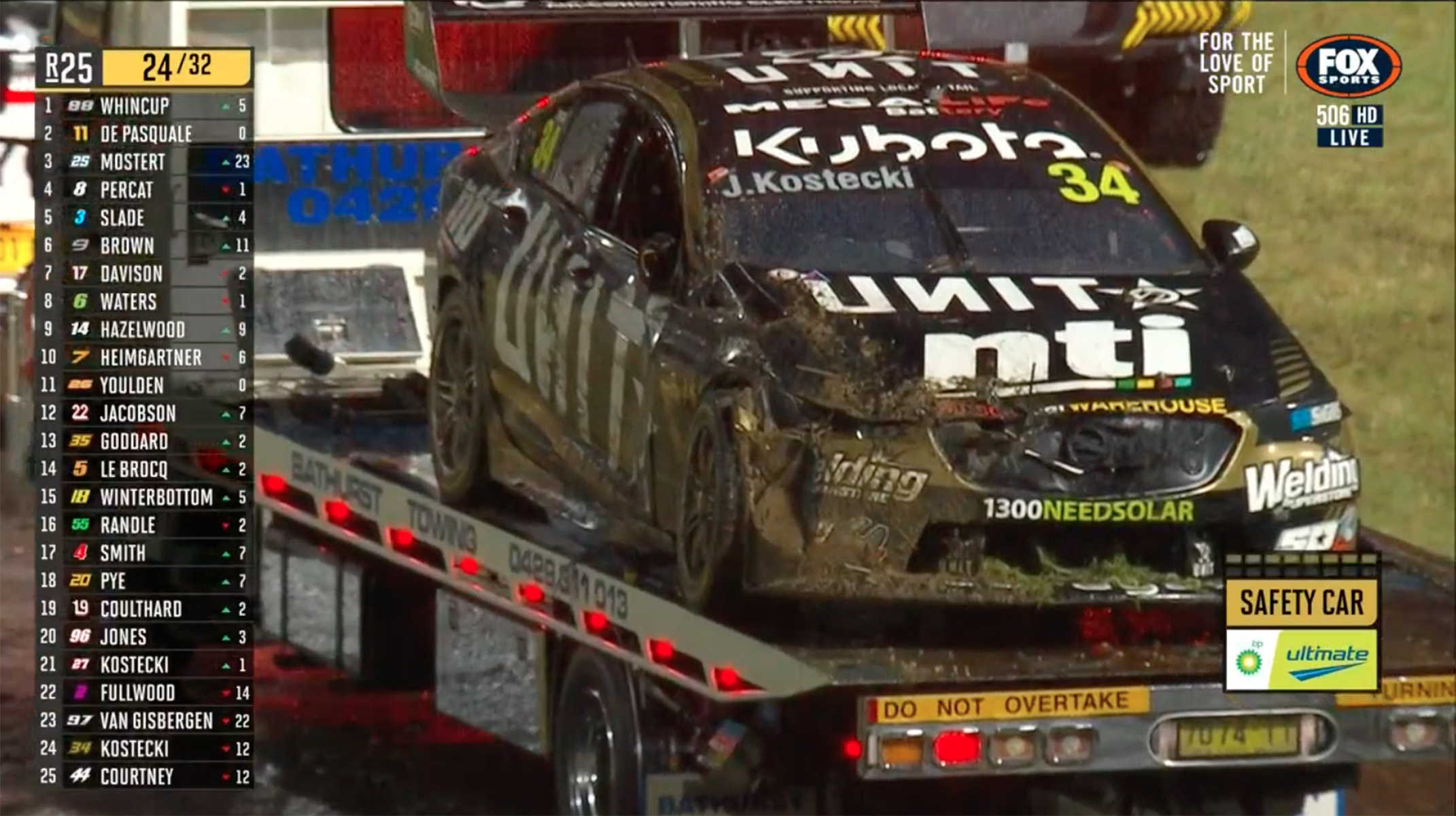 The second Supercars event at Sydney Motorsport Park promised a lot for Matt Stone Racing’s Jake Kostecki, but ended with him buried in the tyre wall.

It was an up-and-down second weekend in Sydney for the Unit-backed driver.

Race 23 saw Kostecki start 16th but spin in the first lap melee at Turn 2 as he tried to avoid the rotating Team Sydney pilot Garry Jacobson.

It wasn’t all bad, however. Kostecki would recover from last to finish where he started.

After a red flag interruption hampered his hopes in a wet qualifying, Kostecki would rise from 25th to 21st in Race 24.

Race 25 looked the most promising for the Perth-born driver having qualified 12th.

In the end, a power steering failure would relegate him to the pit lane just a few laps into the last 32-lapper of the weekend.

After losing several laps to the leaders, Kostecki would return to the action only to aquaplane at Turn 1 and embed his car in the tyre wall.

“Our pace hasn’t been great at Sydney but last weekend we were getting more speed and qualifying in the mid-pack instead of the back,” Kostecki told Speedcafe.com.

“We were slowly chipping away at it and for the last race we were starting 12th. I got a good start but I already felt the power steering go on the out lap, so I knew there was an issue.

“I still got a good start, nevertheless, and got up to 10th. Then the Safety Car came out and I could still feel the power steering issue.

“I couldn’t turn and I was even struggling to keep up with the guys in front of me under the Safety Car so I had to come in and try fix it.

“We went a couple of laps down, so that hurt us. We didn’t get to maximise the points with our good qualifying position.

“Obviously when we came out, the rain was pretty bad. My front windscreen was all fogged up so I could hardly see anything.

“I must have hit a puddle and aquaplaned straight off when I turned in. It just sent me loose and as soon as it touched the grass it went faster on the grass into the wall.

“I never want to give the car back damaged to the boys. Yeah, it was not a good race.”

Thankfully, Kostecki would walk away from the crash with little more than a bruised wrist.

Despite a weekend where he ultimately just once cracked the top 20, the Tickford Racing-bound driver is optimistic heading into the remaining two rounds at Sydney Motorsport Park.

That’s largely due to the week-on-week progress his Matt Stone Racing crew has made.

“SMP1 we were qualifying at the back and making a few spots in the race, but not many,” said Kostecki.

“Then in the last race of SMP1 we got a better direction for SMP2. We were actually qualifying around 16th.

“Overall, we actually had a lot better pace in this round. We’re going in the right direction, just under the circumstances we didn’t get the best results, especially with how we finished off.

“Overall, our points were just terrible, but we showed more promise than the round before, that’s for sure.”