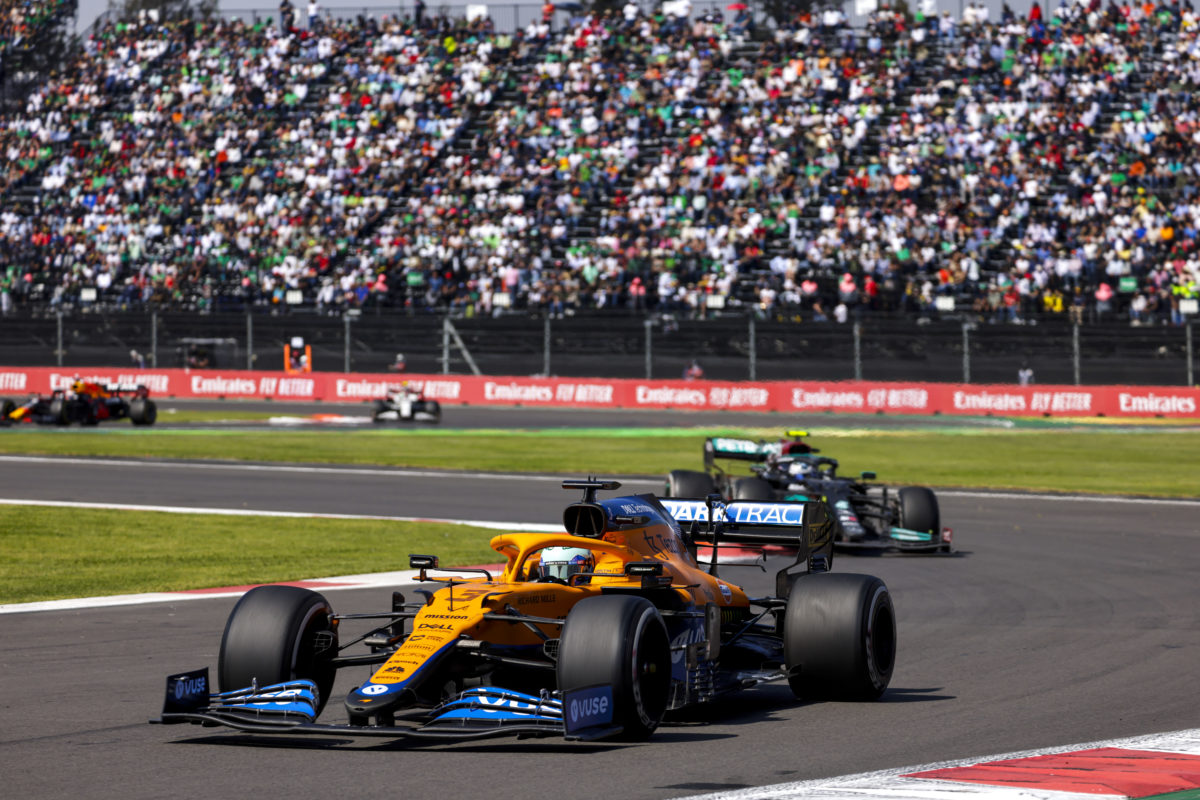 Mercedes boss Toto Wolff was surprised Daniel Ricciardo was not penalised for spinning Valtteri Bottas at the first corner at the Formula 1 Mexico City Grand Prix.

Bottas started on pole, only to be swamped by Lewis Hamilton and Max Verstappen on the long run to the first braking zone.

Their clash triggered further incidents in the pack, with Yuki Tsunoda and Mick Schumacher both eliminated from the race as the field attempted to navigate its way by Bottas.

For his part, Ricciardo picked up a broken front wing, though an opening lap Safety Car for the opening corner melee saved his blushes somewhat.

The pair then spent much of the race running line astern, Bottas unable to find a way through his McLaren rival before Mercedes called him into service for Hamilton.

“The stewards should have a look into it,” Wolff said.

“In hindsight, it was surprising that they didn’t look at the penalty.”

Predictably, it’s a view not shared by his opposite number at McLaren.

“From my point of view it was a racing incident,” said Andreas Seidl when asked by Speedcafe.com for his view on the clash.

“Daniel managed to make the apex, and at the same time Valtteri was crossing in from the outside quite sharp with a lot of cars around.”

While Bottas was pitched into a spin, Ricciardo suffered a broken wing and damage to his sidepods as a result.

“I don’t know exactly, in tenths, how much the damage was costing,” Seidl added.

“But we saw straight away at the pitstop, and then we could see that in the numbers that he was down on downforce, which I think was changing the balance a bit of the car.”

Ricciardo finished the race 12th, two places behind team-mate Lando Norris who’d started from the rear of the grid owing to a power unit penalty.

Ironically, the Australian spent much of the first half of the race battling with Bottas as they looked to recover, though their progress through the field was slow.

Bottas then fell down the order in the closing laps after Mercedes twice pitted him in an effort to deny Red Bull the bonus point for fastest lap.

With Ferrari finishing fifth and sixth, and scoring 18 points to McLaren’s one, the Scuderia now holds a 13.5-point advantage over the Woking squad in the constructors’ championship with four races to go.

The next of those comes this weekend with the Sao Paulo Grand Prix, Free Practice 1 for which begins at 02:30 AEDT on Saturday morning.