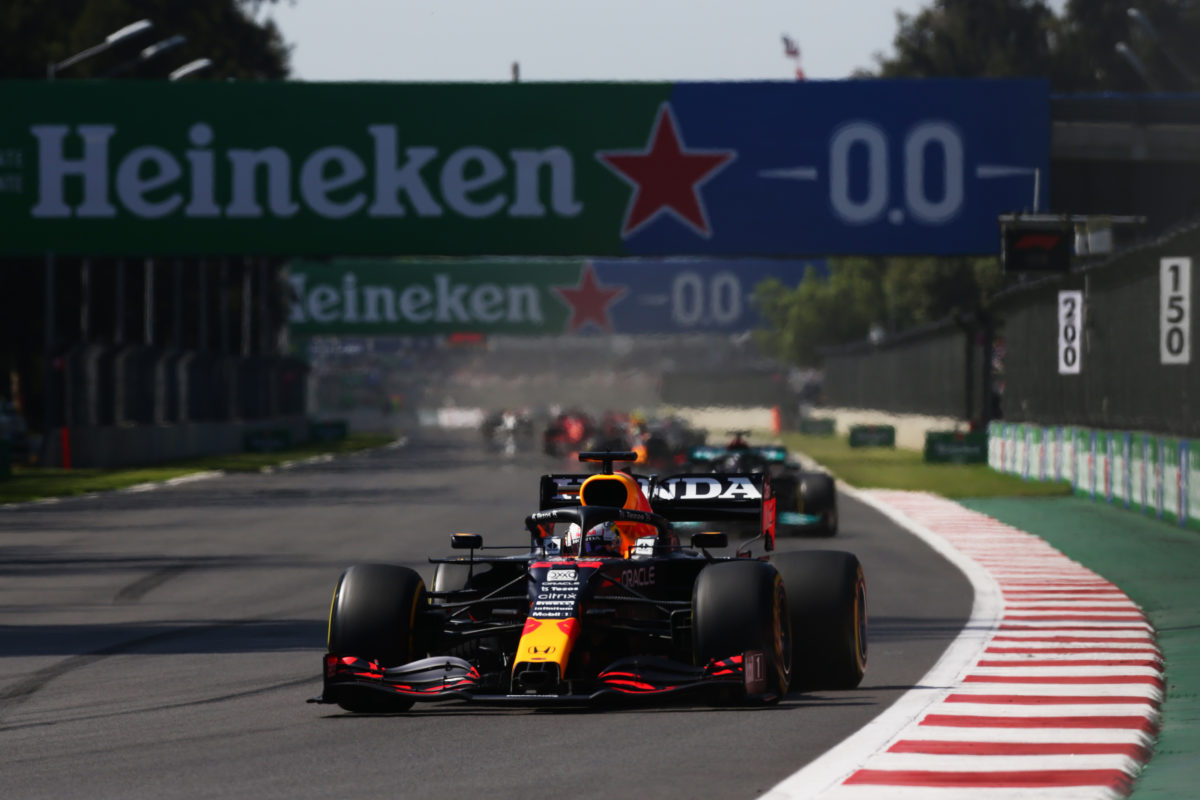 The Dutchman took the lead at the opening corner, winning by a comfortable 19 seconds over Hamilton, who survived a late charge from Sergio Perez.

The leaders ran three-wide into the opening corner, Verstappen seizing the lead around the outside as Bottas was spun by Ricciardo, forcing Perez to the grass.

In the pack, Yuki Tsunoda and Mick Schumacher came acropper, both victims of the Bottas incident as the field jockeyed to negotiate their way by the Mercedes.

The Safety Car was called for to clear the stricken AlphaTauri and Haas while Bottas and Ricciardo stopped at the end, the Finn emerging 17th and the Australian falling to the last of the runners as he had a new wing fitted.

The race resumed at the start of Lap 5 with Verstappen leading Hamilton, Perez, Pierre Gasly, Charles Leclerc, and Antonio Giovinazzi.

After the first racing lap, the gap between the front two was 1.8s, with Perez 1.3s further back as the field quickly became strung out.

While the front of the race was stagnant, there were battles down the order – Raikkonen passing Russell for ninth, Alonso also finding his way through on the Williams driver soon after.

At the back of the field, Ricciardo and Bottas were making slow progress, rising up the order courtesy of those around them pitting after 15 laps more than any stellar pace from either.

Verstappen’s lead had extended to 7.7s after 20 laps, Hamilton 1.7s clear of Perez and Gasly continued to hold down fourth, 10.2 away from the podium.

The middle phase of the race was something of a waiting game, Verstappen holding a pace advantage over Hamilton while Red Bull were strategically hamstrung by the Ferraris further back.

Sitting third, ideally Perez would have been hauled in to force Mercedes’ hand, looking to undercut Hamilton in the process.

However, the Mexican was not sufficiently clear of the two Ferraris to do so, meaning he could do no more than follow the seven-time world champion ahead.

Mercedes took an aggressive approach, stopping Hamilton on Lap 30 and rejoining behind Leclerc.

The Monegasque driver stopped next time through, opening the door for Hamilton.

Perez’s progress was not helped by the presence of backmarkers, preventing him from exercising any pace left in the medium compound tyres.

On Lap 33, Verstappen stopped from the lead, swapping his medium tyres for hards in a 2.2s stop.

He rejoined comfortably clear of Hamilton, promoting Perez to the lead on an apparent long opening stint.

The play now was to leave him with a tyre advantage in the closing laps in the hope he could use that over Hamilton to steal second in the final laps.

Perez duly stopped on Lap 41, a fresh set of hard tyres bolted on as he emerged third on track, in the slipstream of Russell whom he promptly lapped.

After the pit sequence completed, Verstappen enjoyed a 10.1s out front, with Hamilton 8.8s clear of the second Red Bull, but with an 11-lap tyre disadvantage.

The gap between second and third gradually reduced over the next laps, Perez cutting it to 5.7s with 20 laps remaining.

The gap continued to close, Hamilton seemingly metering his effort to protect his tyres – though an off-track moment at Turn 12 didn’t help his efforts to fend off the charging Red Bull behind.

With 10 laps remaining, Perez was just 1.1s in arrears of Hamilton, the pair 16.8s down on Verstappen who’d raced away to a lonely lead.

The lapped Norris proved a factor, the Mercedes unable to draw close enough to trigger the blue flag sector as he advantage was eroded.

On Lap 62, Perez had DRS, moving around in the braking zone in an effort to distract Hamilton.

Norris soon moved aside, allowing the contenders for second place to both slip by.

With six laps remaining, Mercedes pitted Bottas from 13th with a view to deny Red Bull the point for fastest lap.

Having reeled in Hamilton, Perez’s charge stalled once he got within a second of his rival, not aided by having to navigate his way by Fernando Alonso.

Having had no pace on his new tyres, Mercedes pitted Bottas again at the end of Lap 69 for a set of soft tyres.

Perez’s charge was ultimately in vain, coming close but never able to mount a challenge on Hamilton.

Verstappen won comfortably, Hamilton second over Perez by 1.1s with Gasly an impressive if lonely fourth.

The Dutchman now holds a 19 point advantage at the top of the drivers’ championship, with just a single point between Red Bull and Mercedes in the constructors’ fight.