Supercars should not necessarily have moved the Armor All Sydney SuperNight schedule forward despite forecasts of rain which ultimately saw Race 25 shortened, according to leading teams.

The final race of Event 9 of the Repco Supercars Championship was red flagged on Lap 25 of a scheduled 32, with results eventually backdated to the completion of Lap 23 once the decision was made to not restart.

It kicked off under lights at 19:30 local time at Sydney Motorsport Park, where rain and potentially even thunderstorms had been forecast from several days in advance.

There is precedent for shifting track activity forward due to the threat of inclement weather, with last year’s Bathurst 1000, which relies on natural light, kicking off half an hour earlier than originally planned.

On the other hand, there was no change to the Sunday programme at the 2018 Gold Coast 600 despite weather warnings earlier in the weekend, and that day’s race had to be abandoned due to thunderstorms.

Then, no championship points were awarded as the race did not reach 50 percent of the scheduled distance, whereas the most recent encounter did go past that threshold.

The podium finishers in Race 25 of 2021 all gave their support to Race Control’s red flag call, and their team bosses had no qualms with the fact that Supercars had continued with its original schedule.

“I guess, how many times do they forecast rain and storms and it doesn’t happen?” was the rhetorical question which Shell V-Power Racing Team manager Ben Croke posed to Speedcafe.com on the subject of moving track activity forward.

“Possibly [there could have been a change], but the schedule’s there and the fans turn up, expecting to see a night race.

“You can’t help the weather sometimes. It might have only rained lightly; it’s hard to know.”

His counterpart at Red Bull Ampol Racing, Mark Dutton, had a similar view.

“Really, initially it was meant to be much worse – we were meant to have bad weather on the Saturday and that didn’t eventuate – and then even [on Sunday], it sort of got pushed back.

“Yeah, we had some [bad weather] in qualifying, but the first race of the day went fine and a lot of the race [on Sunday night], yes it was wet, but it wasn’t really ‘til sort of the last quarter or last third where it turned really bad.

“So, no, I think they did the right thing.

“It’s easy to say in hindsight that they could have done something, but I think with the information and the fact that it was changing and improving, that they made the right call.”

Walkinshaw Andretti United team principal Bruce Stewart would not be drawn on the specifics of Supercars’ decision-making, but did note, “We live in Melbourne and weather changes every 10 minutes.

“It’s about entertainment and there was a pretty cool spectacle under lights.”

That Race 25 was held under lights also did not necessarily exacerbate the problem caused by the rain, either.

In fact, based on comment from Stewart’s leading driver, Chaz Mostert, the artificial illumination was better for visibility than sunlight would have been. 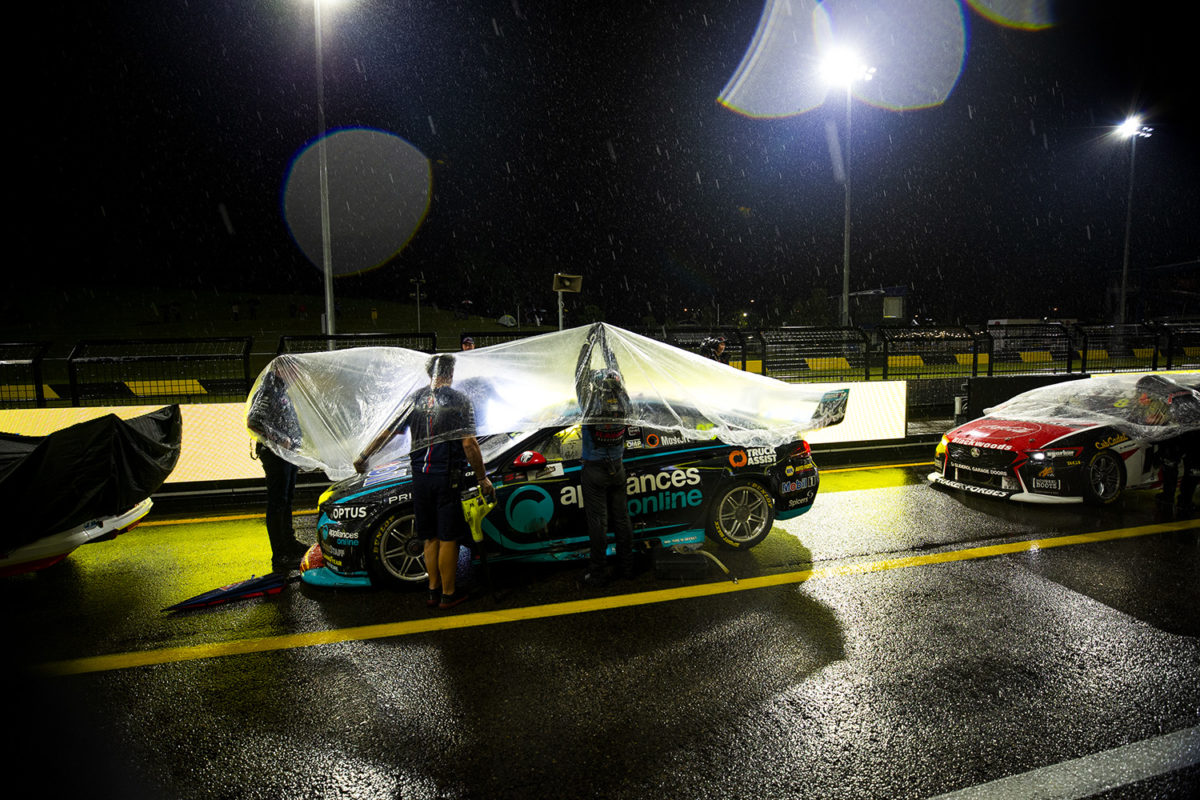 Chaz Mostert’s car in pit lane during the red flag

“In the daytime when you have the spray that far back, it’s so glary that you really get whited out,” he explained after his drive from last to third.

“Here, you see the spray, but you can still see the track limits with the yellow lines and stuff like that.”

Croke was sceptical that the race could have safely restarted had it been run in the daytime.

“It was pretty wet out there,” he noted.

“There was so much spray and [you are] still not able to see flag points, and just standing water.

“We’ve been at many places during the day when it’s been red flagged and you couldn’t restart the race.”

Croke and Dutton agreed with Race Control’s decision not to restart, after the latter had said on television that the prospect was an “interesting” one.

Elaborating on that comment, he explained that the deployment of the Safety Car, necessitated by a Jake Kostecki crash, would have made for more treacherous conditions due to continual pooling of water.

“It was borderline already,” stated Dutton.

“One of the rough rules that I think the drivers and the officials use is, when you’re wheelspinning and aquaplaning in a straight line, that’s when it’s starting to get to the point when you need to call it.

“What happens when the Safety Car comes out is that standing water increases, because when the cars are going flat-out, they’re dispersing the water, it’s spraying, it’s getting pushed back.

“So, the track actually gets worse at a quicker rate when the cars aren’t running full-speed, so that’s what it means in regards to if they were to restart it, it’d be ‘interesting’.

“So, a hundred percent, I agree they made the right call.

“You never want a restart when all of a sudden there’s a big pile-up anytime, let alone when we’re here, on the trot, for all these races in a row.

“The last thing we needed is to be going into the next week before SMP3 with half the field having to repair their cars, so it was a good call.”

‘SMP3’, being the BP Ultimate Sydney SuperSprint which is comprised of three daytime races, begins this Saturday (November 13).