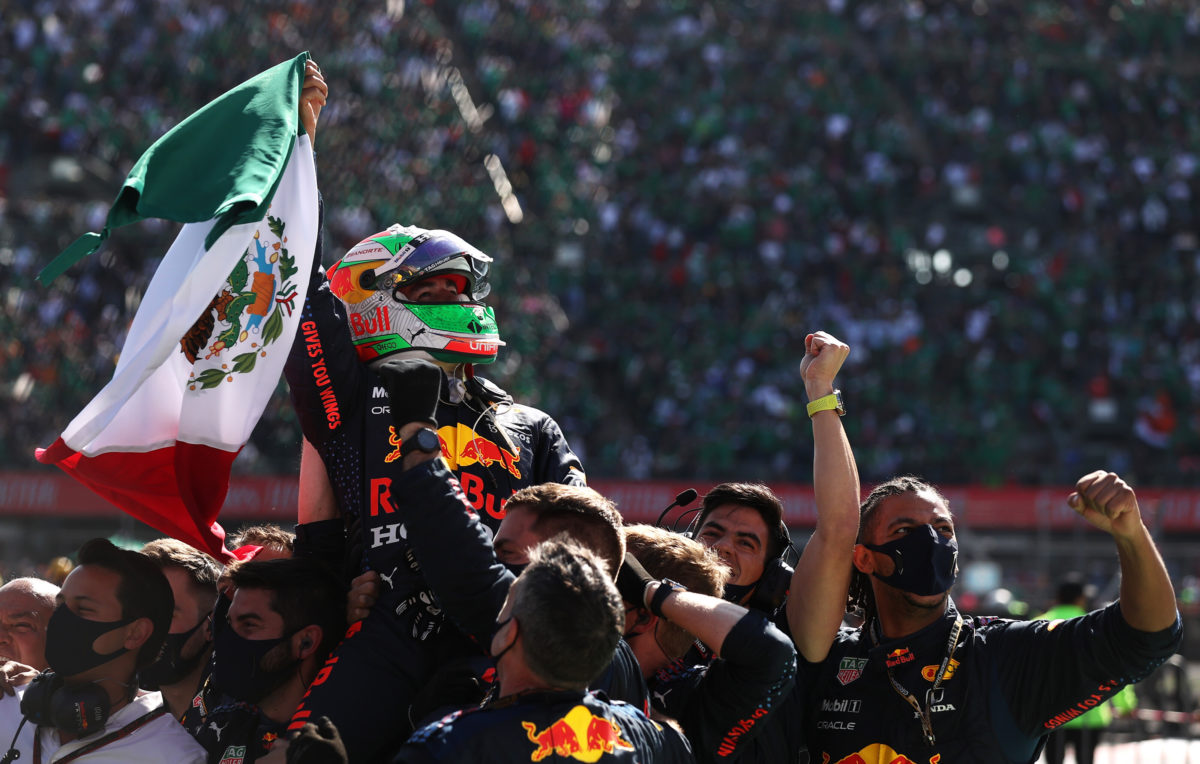 The Mexican followed home his Red Bull team-mate Max Verstappen and Mercedes’ Lewis Hamilton, despite a late charge to steal away second place.

Even still, he became both the first Mexican to lead a lap of his native event, and then stand on the podium.

“Being on the podium at your home Grand Prix is something very special,” Perez said.

“Obviously I wanted more, I wanted to win the race and obviously to finish one-two for the team would have been amazing.

“At the end of the day, we are such competitive persons that if we finish third, we really, really don’t enjoy it.

“But today is one of those days that I must enjoy, because the crowd and seeing so many people so happy, and especially on the podium, like very much everyone who has been with me since day one was on the podium, so that was extremely special for me.”

Having risen to third following Valtteri Bottas’ opening turn dramas, Perez shadowed Hamilton through much of the opening stint.

The Red Bull driver appeared to have greater pace, but found himself stuck in the turbulent air ahead, and was strategically hemmed in by the Ferraris behind hanging just inside his pit window.

When they were finally cleared, it was Mercedes which seized the initiative, covering off the threat of a Red Bull undercut.

“There was a lap where it was so critical to do the undercut,” Perez explained.

“Obviously they pitted that lap, so we did the opposite and we went long.”

Remaining on track, the two-time race winner’s cause was not helped by lapped traffic at a time when Hamilton had both fresh tyres and clean air.

Even still, the local favourite doubts he’d have been able to make much more of an impact than what he ultimately did.

“I didn’t have a chance,” he confessed.

“Overtaking here is really difficult, given their straight line speed, they were really strong on that, I didn’t have a chance.

“So it was a bit of a shame because I think we had the pace to finish one-two today.”

The result capped of a career-best run of results for the 31-year-old, who has now stood on the podium for the third time in as many races.

He’d demonstrated strong form throughout practice too, leading to suggestions he would pose a serious threat to pole position.

As it transpired, Mercedes had the better run of it in qualifying, with Perez fourth on the grid alongside Verstappen and behind Hamilton and Bottas.

“I was very disappointed yesterday,” he said of his qualifying effort.

“I felt like we were going into qualifying with a great momentum, having had a good FP3 and the pace in the car.

“We are enjoying today a lot but we have to understand what went so wrong for us yesterday, as well, because all of a sudden it swung around and Mercedes was a very strong force yesterday.”

Perez sits fourth in the drivers’ championship, 20 points down on Bottas, while Red Bull now trails Mercedes by just a single point courtesy of the double-podium in Mexico City.

F1 next heads to Interlagos for the Sao Paulo Grand Prix, Free Practice 1 for which begins at 02:30 AEDT on Saturday morning.