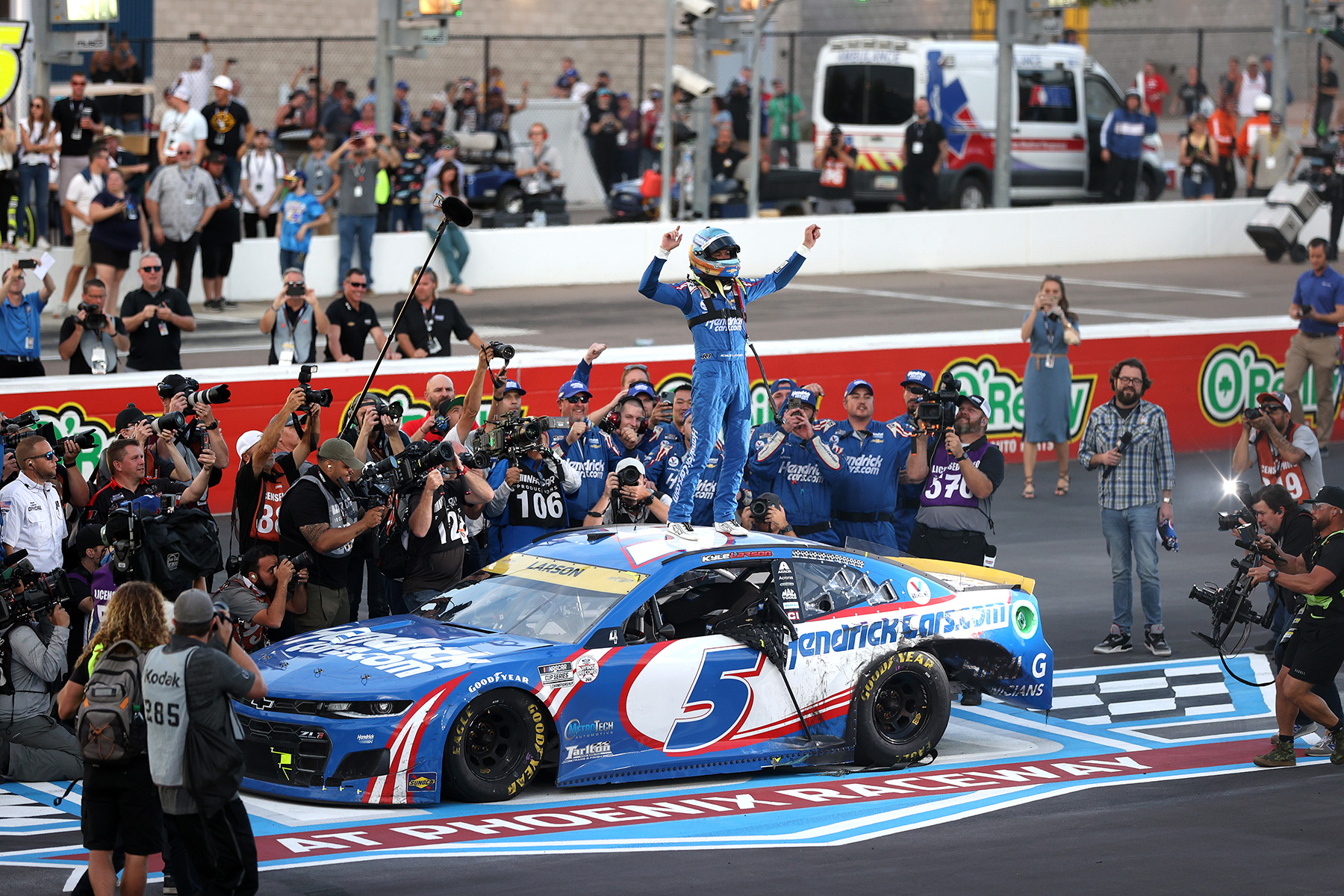 Kyle Larson has claimed an emotional first NASCAR Cup Series title with victory in the season finale at Phoenix Raceway.

The #5 Chevrolet Camaro driver was dominant in only his first season with Hendrick Motorsports, winning 10 races and a further eight podiums on his way to the title.

It marks the 14th drivers’ championship for Hendrick Motorsports, Larson joining the likes of Jeff Gordon, Terry Labonte, Jimmie Johnson, and Chase Elliott to win with the NASCAR legend.

It was an emotional conclusion to the season for Larson, who last year was axed by Chip Ganassi Racing during the coronavirus-induced break for making a racial slur.

“I cannot believe it,” said Larson of his title win.

“I didn’t even think I’d be racing a Cup car a year and a half ago, and to win a championship is crazy.

“I’ve gotta say first off, thank you so much to Rick Hendrick, Jeff Gordon, NASCAR, every single one of my supporters in the stands watching at home, my family – I’ve got so many of my friends and family here – my parents, my sister, my wife and kids.

“Owen [Larson’s son] had been giving me crap a month and a half ago about how I can’t win a Cup race when he’s there, so that added a lot of pressure.”

The final two caution periods would prove pivotal in deciding the championship.

With 66 laps to go, Joe Gibbs Racing’s Truex Jr pitted from fourth. Just moments later Anthony Alfredo of Front Row Motorsports would crash his Ford Mustang on the back straight.

Once the leaders pitted under yellow, Truex Jr would cycle to the lead.

Truex looked comfortable out in front thereafter with team-mate Hamlin in second while Hendrick Motorsports duo Elliott and Larson climbed to third and fourth respectively.

However, the last caution and pit stop sequence would ultimately decide the outcome.

With just 31 laps remaining, MBM Motorsports driver David Starr would bring out the yellow after a brake rotor shattered and parted company with his Toyota Camry.

Having taken pole position earlier in the weekend, Larson had first rights to the final pit bay nearest pit exit.

With a clear exit ahead of him, he leapt from fourth to first, a position he’d not relinquish thereafter despite a late surge from Truex Jr.

“There’s so many points in this race where I did not think we were going to win,” said Larson.

“Without my pit crew on that last stop, we would not be standing right here. They’re the true winners of this race. They’re true champions, I’m just blessed to be a part of this group.

“Every single man or woman at Hendrick Motorsports, this win is for all of us and every one of you. This is unbelievable. I’m speechless.”

The 2022 NASCAR Cup Series gets underway with the Busch Clash at Los Angeles Memorial Coliseum on February 6 (local time).

The first points-paying round will be the Daytona 500 on February 20 (local time).