Gardner closes in on Moto2 title with Portimao win

Gardner closes in on Moto2 title with Portimao win 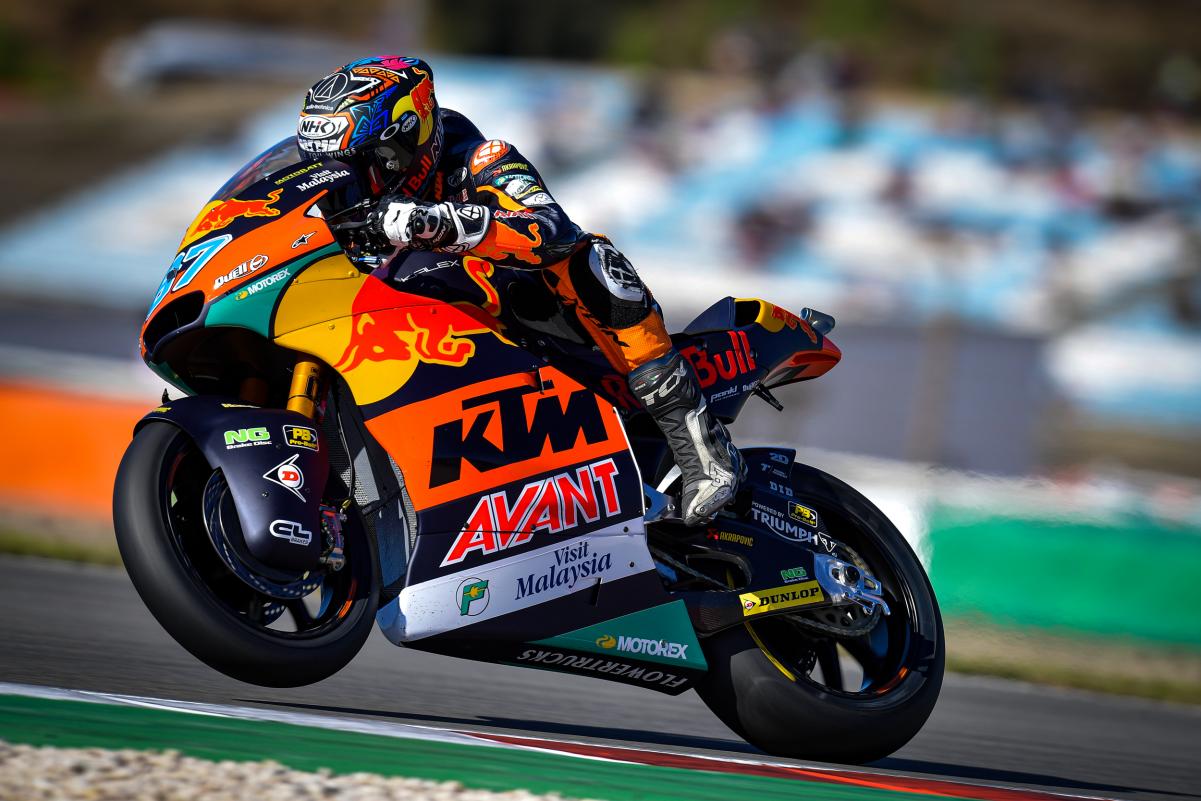 Gardner dropped as low as third but overtook Raul Fernandez for the lead just past the halfway mark of the 23-lapper around Portimao, and they would go on to deliver a one-two for the Finnish squad.

It means the Australian need only finish 13th next weekend at Valencia to take the crown, given his margin over his team-mate at the top of the table is now 23 points.

Bezzecchi went down #87’s inside at Turn 1 at the start of Lap 3 and that was how the top three would remain for several laps, as they broke away from the rest.

However, Fernandez was also beginning to creep away from the two behind him, and when his lead moved beyond a full second on Lap 8, Gardner grew impatient behind Bezzecchi.

He would pick off the Italian under brakes at the start of Lap 9, and quickly set about turning the tide in terms of the margin behind #25.

The Sydney native hacked more than a quarter of a second out of Fernandez’s advantage on that lap alone, and had caught the Spaniard on Lap 11.

At the end of Lap 12, Gardner got a run on Fernandez and used the slipstream to make the pass for first position as they dropped into Turn 1.

Fernandez managed to stick with #87 at just a handful of tenths back for some time, before Gardner turned the screws.

Fernandez might have been in trouble had the race gone on much longer, given the rate at which Lowes was catching him in the latter stages, but did not seriously look like losing second spot.

Bezzecchi had begun to lose touch with the KTM Ajo duo almost as soon as Gardner had reclaimed second position from him, as he came to seriously struggle for rear grip.

The VR46 rider was about five seconds in arrears of the orange bikes when Lowes overtook him for third at Turn 3 on Lap 17, then ran wide at Turn 5 on Lap 18 to let Cameron Beaubier (American Racing) and Canet through.

Canet would subsequently overtake Beaubier and they went on to round out the top five, ahead of Celestino Vietti (Sky VR46), Jorge Navarro (Termozeta Speed Up), Bezzecchi in eighth, Augusto Fernandez (Elf Marc VDS), and Marcel Schrotter (Liqui-Moly Intact GP).