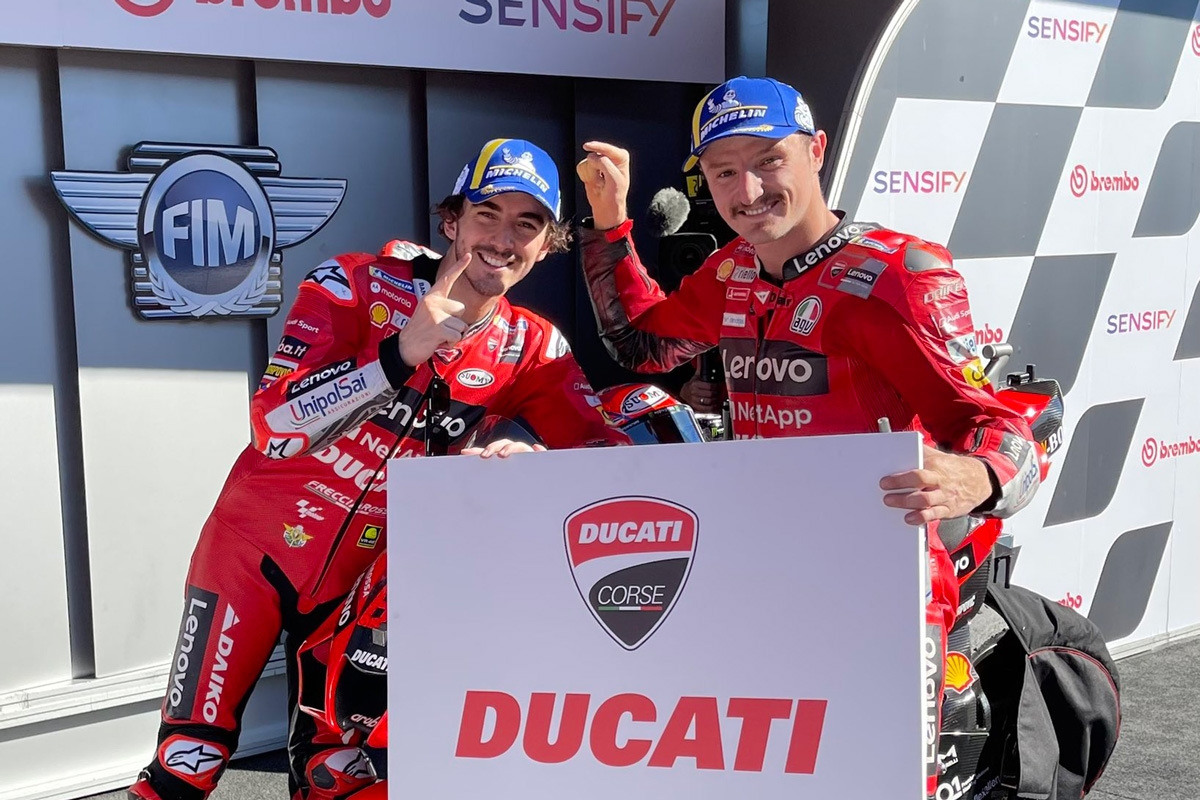 Francesco Bagnaia has soared to a third MotoGP win in five races after dominating the Algarve Grand Prix at Portimao.

Starting from pole position following a record lap time, the factory Ducati rider was imperious in running away with victory at Portimao.

The race was called early, on the penultimate lap, following a collision between Iker Lecuona and Miguel Oliveira.

With the results backdated to the end of Lap 23, the final margin to second-placed finisher Joan Mir (Team Suzuki Ecstar) ended up at 2.478s.

Off the start, it was Jack Miller (Ducati Lenovo Team) who got the best getaway to lead the field into Turn 1.

Bagnaia wasted no time in regaining the lead though, getting the upper hand with a stronger exit out of the first corner, and later that same lap Mir would pass Miller too.

Bagnaia and Mir quickly set about dropping Miller, who fell back into the clutches of a tight battle back behind initially led by Jorge Martin (Pramac Racing).

By Lap 4, the Australian’s threat from behind was now Alex Marquez (LCR Honda Castrol), the Spaniard having started well from his career-best grid slot of eighth.

While Bagnaia upped the ante to widen his buffer over Mir to eight tenths by Lap 7 and towards 1.5s at the midway point of the race, Miller continued to fall back and was passed for third by Marquez at the start of Lap 12.

Unlike the medium-shod Miller, Marquez was making his hard rear tyre work a treat.

By the end of Lap 15 of 25, the order ran: Bagnaia, Mir, Marquez, Miller, Martin, Johann Zarco and champion-elect Fabio Quartararo.

Starting seventh, the Monster Energy Yamaha star was sluggish off the line and struggled to find a way past the Ducatis ahead – Zarco sneaking through after Quartararo ran wide at Turn 13.

The biggest improver in the opening segment was home hero Oliveira, who gained seven spots to 10th within two laps.

By contrast, Maverick Viñales plummeted to last immediately – and things would get worse for Aprilia Racing Team Gresini when Aleix Espargaro crashed out on Lap 8 at Turn 1.

That completed a shocking day for the older Espargaro brother, who had also crashed in Sunday warm-up.

He was the second to trigger yellow flags, Danilo Petrucci (Tech 3 KTM Factory Racing) making it only to the fourth corner of the opening lap.

Miller, searching for his first podium since the Catalan Grand Prix five months ago, briefly snuck back into third with a block pass at the start of Lap 19, only for Marquez to execute a criss-cross.

Two laps later, Miller would make it stick after a Marquez error opened the door.

A little further back, the same lap would bring Quartararo unstuck at Turn 5, a crash representing his first non-finish of 2021.

Quartararo had held sixth at the time, Martin having lost positions to both Zarco and #20 moments earlier.

He’d be joined in the non-finisher category by Lecuona and Oliveira, an incident which brought about the race-ending red flag.

Lecuona lost his #27 on entry to Turn 13, wiping out his fellow KTM competitor.

After initial concern, both riders were seen to be conscious, Lecuona appearing to apologise.

The early stoppage did, however, cost Marquez any chance of launching a last-gasp assault on Miller, leaving him to settle for fourth.

With the results, Bagnaia and Mir sealed second and third, respectively, in the riders’ championship.

The MotoGP season will come to a close at Valencia next weekend.