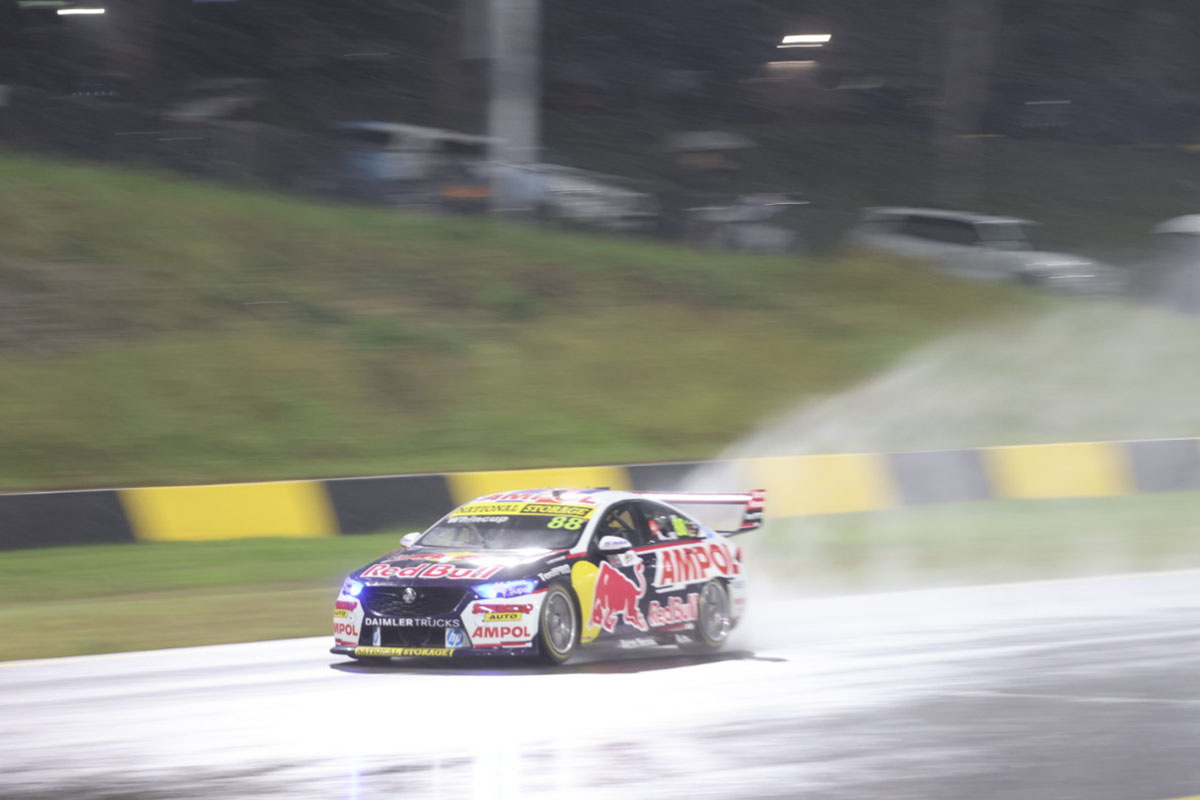 Jamie Whincup has won a chaotic race under lights at the Armor All Sydney SuperNight which was red flagged early due to rain.

Whincup led from the second corner of Race 25 until the race was initially suspended during a Safety Car period on Lap 25, less than 10 minutes before time-certainty would have kicked in at 20:33 local time/AEDT.

However, at 20:40 local time/AEDT, Race Director Tim Schenken advised that the race had been called for good, with results backdated to the completion of Lap 23 at Sydney Motorsport Park.

It locked in the #88 Red Bull Ampol Racing entry as the winner, with Anton De Pasquale second in the #11 Shell V-Power Racing Team car and Chaz Mostert third from the very back of the 26-car grid in Walkinshaw Andretti United’s #25 Mobil 1 Appliances Online ZB Commodore.

Mostert had qualified second-fastest but was excluded from the session due to a breach of technical regulations, but his fightback was arguably not the most remarkable saga of the night.

Championship leader Shane van Gisbergen was classified last finisher in 23rd after twice being issued a drive-through penalty, but only ever serving one of them, due to an unsafe pit release.

The other, for passing De Pasquale before the Control Line at the first (and ultimately only) Safety Car restart was withdrawn when officials decided that the Dick Johnson Racing driver had lifted off the throttle.

Rain fell throughout, with everyone on wet tyres on their way to the grid or making the change on the grid as they prepared for the start.

De Pasquale had been elevated to the front row by the Mostert penalty, but neither his #11 Mustang nor the #97 Red Bull Ampol ZB Commodore would lead the field to the first corner.

Jamie Whincup (#88 Red Bull Ampol ZB Commodore) did almost as well in jumping from sixth to second, before going down the inside of Fullwood as they braked for Bond Bend (Turn 2).

Whincup initially did not get a chance to break away given a Safety Car had to be called when James Courtney (#44 Boost Mobile Mustang) and Brodie Kostecki (#99 Boost Mobile ZB Commodore) ended up in the wall after tangling at Turn 3.

The restart came on Lap 6, and that immediately saw two critical moments for van Gisbergen.

Firstly, he passed Car #11 before they reached the Control Line, then sprayed off the road at high speed when they arrived at Moffat Corner.

Van Gisbergen just pulled up before the barriers and resumed in 23rd, while Brown and Slade quickly marched to fifth and sixth, respectively in the next handful of laps, behind the two Dick Johnson Racing Mustangs in the order.

Fullwood had to give up second position on Lap 8 after being pinged for a false start, and Whincup moved to more than three seconds clear of De Pasquale on Lap 10.

Mostert was up from last to 10th on Lap 10, thanks to a handful of pit stops but also good speed from the Walkinshaw Andretti United driver.

Van Gisbergen was then issued a drive-through for a restart breach but argued to engineer David Cauchi that De Pasquale had lifted, and the penalty was subsequently withdrawn “after a technical check”, announced Race Director Tim Schenken over the radio.

Slade pitted from fifth and van Gisbergen from 12th on Lap 16, at which time Car #97 was dropped as the right-rear wheel man was still trying to tighten the nut.

The championship leader would thus serve a drive-through after all, which he took on Lap 18, as Davison and Brown pitted from third and fourth respectively.

Despite Davison being given four fresh tyres, he got out ahead of Car #9, only to be swamped by Brown and Slade on either side as they rounded Turn 3, moments later.

Mostert, who had pitted on Lap 11, also bought into the battle, and when it all shook out, that quartet was headed by Slade, from Mostert, Brown, and Davison.

De Pasquale was about eight seconds back from Whincup when he took service on Lap 19, emerging a position ahead of Slade, before a Safety Car was called on Lap 21 in response to Jake Kostecki (#34 Unit ZB Commodore) finding the barriers.

That prompted those who had not pitted, including Whincup and Percat, to do so, and #88 emerged still with the lead of the motor race.

De Pasquale was second, and Mostert third after passing Slade on Lap 20, with those two split by Percat.

The red flag was called as the field trundled around behind the Safety Car on Lap 25, and they were led into pit lane.

Race Control waited around 15 minutes before deciding that there would be no more racing, bringing an end to a dramatic night of activity at Eastern Creek.

The next event is the BP Ultimate Sydney SuperSprint, which takes place from this coming Saturday (November 13).