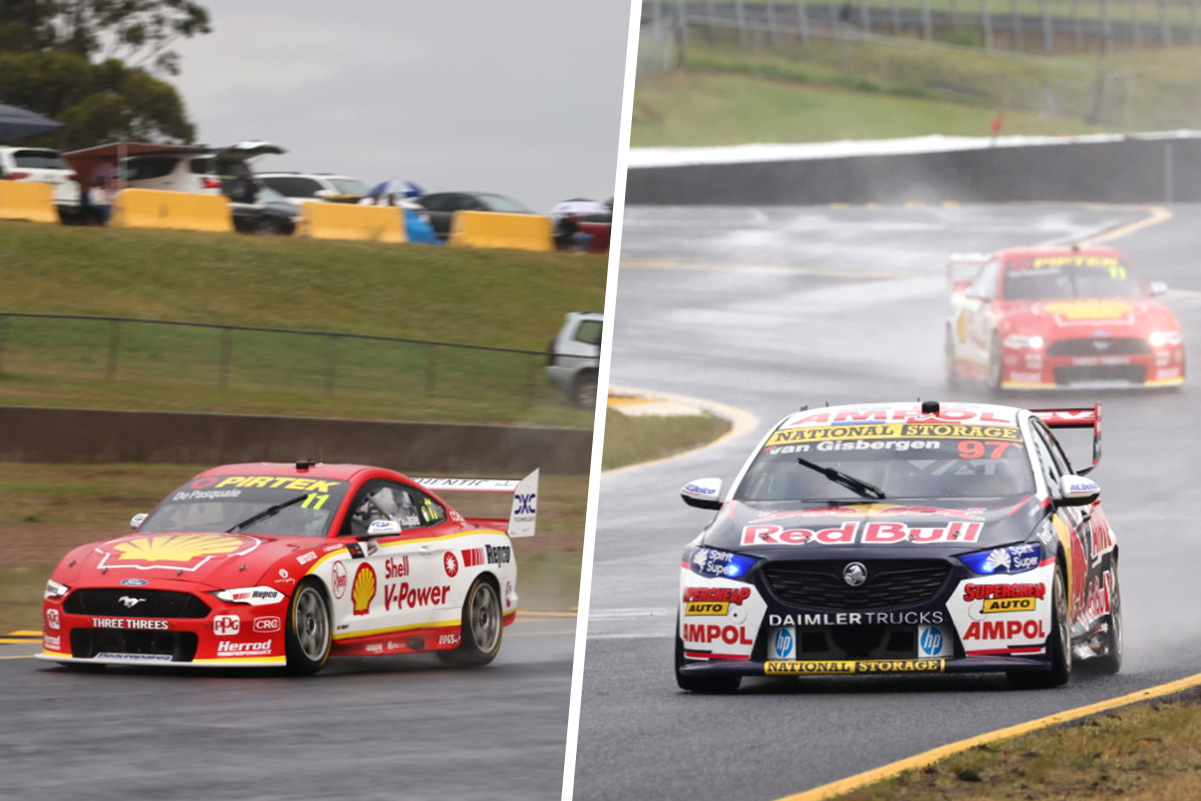 Anton De Pasquale and Shane van Gisbergen have each taken a pole position on the final day of the Armor All Sydney SuperSprint at a wet Sydney Motorsport Park.

The Shell V-Power Racing Team’s De Pasquale was fastest in Qualifying for Race 24 of the Repco Supercars Championship while van Gisbergen will start on the front row for both that encounter and also Race 25 in his Red Bull Ampol Racing entry.

It was also a strong showing for Walkinshaw Andretti United, with Chaz Mostert qualifying second and Bryce Fullwood ninth for the night race, after they had earned the team a Row 2 lockout for this afternoon’s 32-lap encounter.

Mostert’s #25 Mobil 1 Appliances Online ZB Commodore is under investigation, however, for an alleged parc ferme breach, presumably between sessions.

Tickford Racing’s Cameron Waters was a big story of the pair of 10-minute hit-outs, consigned to 17th on the grid for Race 24 following a controversial red flag, before taking eighth in Qualifying for Race 25.

With reasonably heavy rain falling over Eastern Creek and thunder in the distance, championship leader van Gisbergen (#97 ZB Commodore) was fastest after the initial flyers on a 1:43.0629s in Qualifying for Race 24, from Mostert on a 1:43.5069s.

The red flag was called just as Waters began to reverse out of the gravel trap, meaning the #6 Monster Energy Mustang was dumped from third to 15th with the loss of its best time, and no chance to improve again.

When the session restarted, the only other change to the top 10 was Will Davison climbing to fifth from eighth with a 1:43.0302s in the #17 Shell V-Power Mustang.

“I’ve never done a lap here in the wet and we haven’t done many laps in the wet in general for a few years, so just sort of go out there sideways and hanging on and the lap time sort of comes.”

Rain continued to fall, albeit only lightly, as the field rolled out for the second session of the afternoon, with everyone reportedly on new wets rather than keeping warm tyres on the car.

The New Zealander improved again next time around with the 1:42.0645s which would ultimately be good enough for pole, as De Pasquale jumped from last to second-fastest on a 1:42.4400s.

With the chequered flag out, Mostert looked like he was going to pinch top spot from #97, having set the fastest first and second sectors.

However, he was slower through the third intermediate and would break the beam with a time of 1:42.2226s, 0.1581s slower than van Gisbergen.

“It was tough, I had a huge moment at [Turn] 1; I think Waters followed me off there,” recalled the man who took pole for Race 25.

“It was very tough but we managed to get some grip out of it which was cool.

“First session was a bit trickier – Anton was really quick – so we made a couple of little tweaks, but yeah, see what happens in the races.”

Mostert’s effort bumped De Pasquale back to the inside of Row 2, with Nick Percat an even later improver to fourth-fastest on a 1:42.6862s in the #8 R&J Batteries ZB Commodore.

Youlden again earned a berth on Row 6, this time to the outside of Brodie Kostecki (#99 Boost Mobile ZB Commodore), while Brown qualified 18th in the other Erebus Motorsport entry.