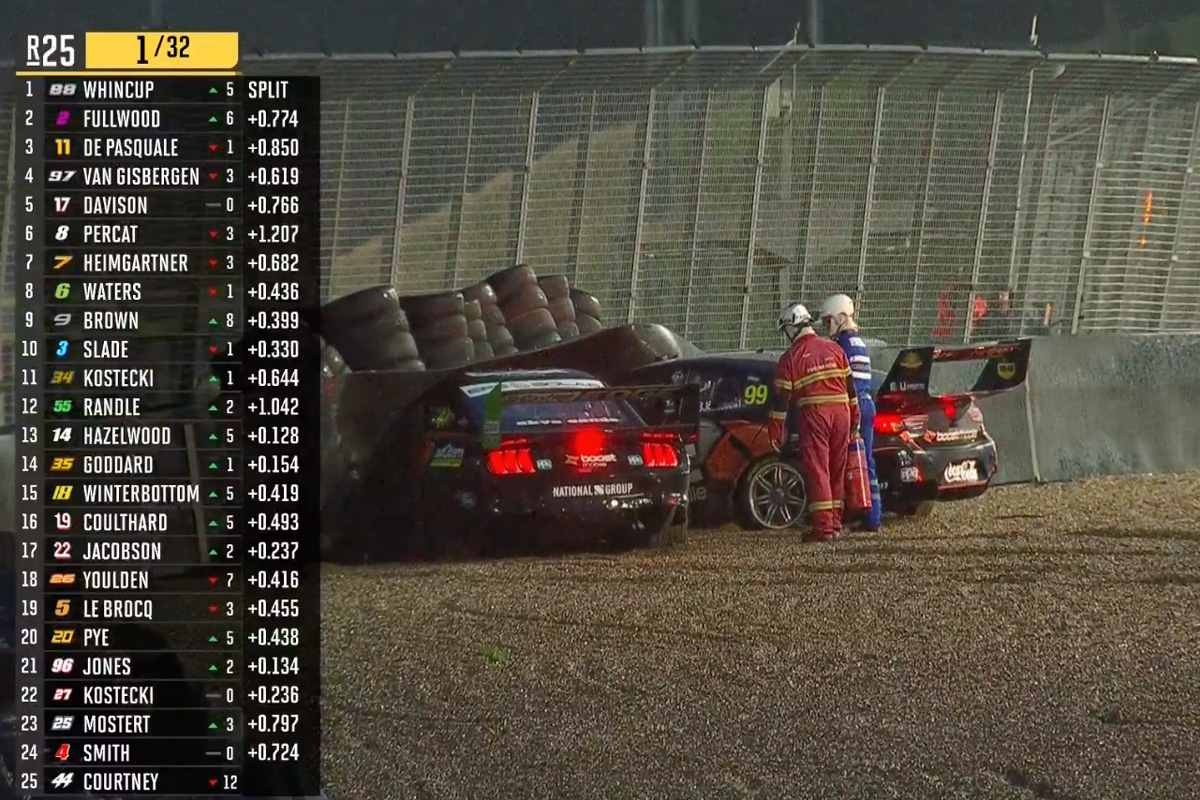 James Courtney has offered his take on an opening lap incident with Brodie Kostecki that took both Boost Mobile-backed Supercars out of Race 25 tonight at Sydney Motorsport Park.

The #44 Tickford Racing Mustang and #99 Erebus Motorsport ZB Commodore collided at Turn 3 as the race commenced under lights amid rain.

Both cars ended up buried in the tyre barrier, triggering the first Safety Car since the Repco Supercars Championship resumed.

“To be honest, I don’t really know what went on,” said Courtney, who had taken his first podium of the season in Race 24 earlier today.

“I had a blinding start, Brodie was a few rows ahead and caught and passed him and maybe [he] didn’t like one Boost car passing another with the boss here.

“I was cruising on the outside and I don’t know what happened on the inside of me but we both ended up in the wall.

“I was saying before that I wanted to get into the beers so it looks like I got my wish.

“But it’s a shame, we had a great start, the car has been really good today and it was quick this morning.”

For his part, Kostecki added: “I actually haven’t had a chance to go and look at it but there was a bit of a concertina in front of me, JC sort of throttled up in the middle of [Turn] 2, we just started banging doors and then all of a sudden we were just hanging out wide a bit.

“Then the wheels just interlocked and it just chucked my steering left, so yeah, a real shame.

“We’ve had a pretty horrid day for #99 today but luckily there’s next week.”

Matt Stone Racing’s Jake Kostecki – cousin of Brodie – had also been caught up in that Lap 1 incident.

Having been “pissed off” about a power steering drama that forced him into the garage for a number of laps, Jake triggered the second Safety Car of the race when he crashed on the exit of Turn 1 on Lap 21.