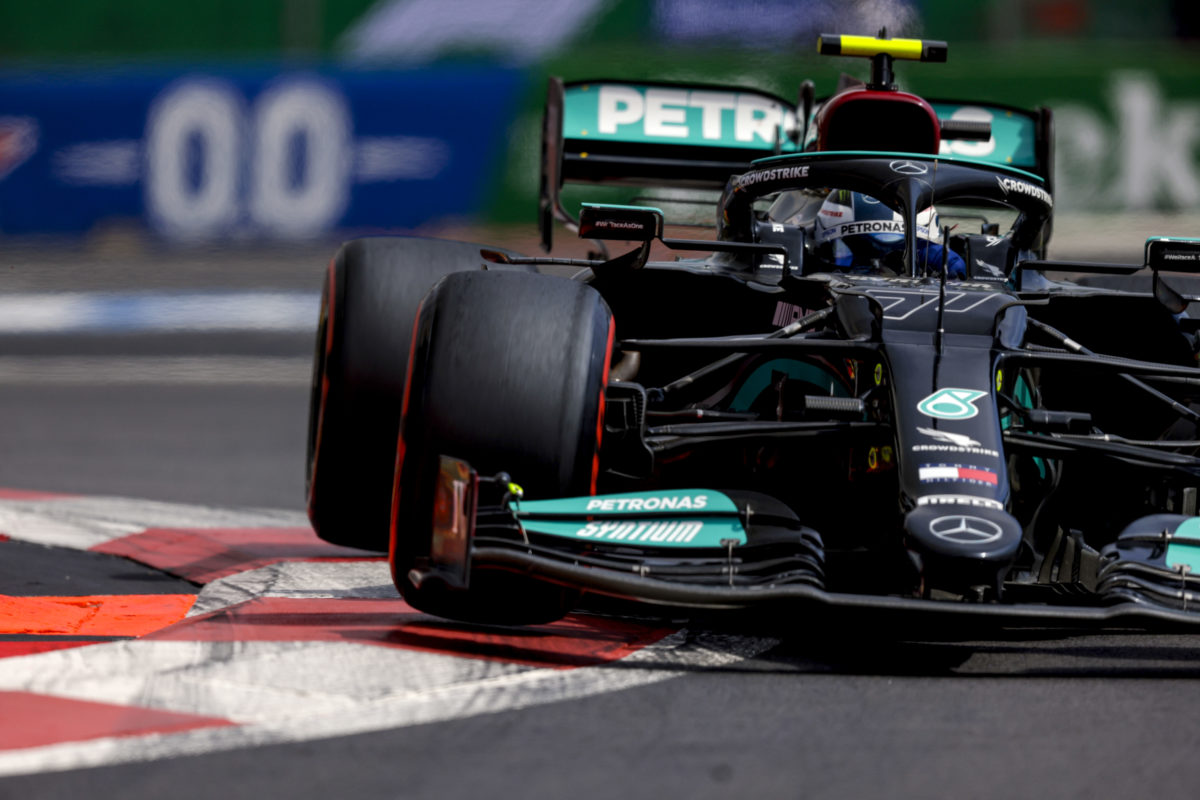 The Mercedes driver banked an impressive lap in Qualifying 3 to get the upper hand over both Lewis Hamilton and championship leader Max Verstappen.

The opening segment of qualifying was brought to an early halt when Lance Stroll crashed exiting Peraltada.

Sitting broadside to the direction of travel, the Aston Martin’s front wing had been torn off, and his front-left taking a knock courtesy of his impact with the barrier.

The Canadian had been wide of the line exiting the final corner, skating further wide before slewing into the fence.

It triggered a lengthy stoppage as the Aston Martin was cleared and the barrier repaired.

Once the session resumed, Carlos Sainz reported a lack of power.

Following a series of instructions from the pit wall, he was able to get the Ferrari going once more.

The segment ended with Bottas fastest, pipping Charles Leclerc as Verstappen fell to third and Pierre Gasly in fourth.

Both times came on the medium compound tyres with all but Yuki Tsunoda and Esteban Ocon opting for the yellow-walled rubber.

The AlphaTauri driver was a surprise third fastest, Tsunoda showing strong pace despite facing a grid penalty for the race.

With four minutes to run, the Red Bulls emerged once more; Perez on a set of mediums and Verstappen softs.

Hamilton also returned to the track, improving on his earlier effort with a 1:16.474s inching him ahead of Verstappen by 0.009s.

He remained fastest from Verstappen, with Tsunoda third from Bottas, Gasly, Leclerc, Ricciardo, Sainz, and Norris.

Qualifying 3 commenced with Red Bull attempting to send Verstappen out behind Perez, only for the two Ferraris to emerge between them.

All teams were looking to use the slipstream down the front straight; Ricciardo following Norris for McLaren, while Hamilton trailed Bottas for Mercedes.

Once that shook itself out, Bottas was fastest with a 1:15.875s from Hamilton, then Verstappen, Perez, and Gasly.

Ricciardo slipped to seventh, Leclerc sixth best with a 1:16.857s.

Verstappen began his second flying lap much closer to Perez, who in turn was tucked up behind the Ferraris for a slipstream of his own.

Perez aborted his lap through the snaking middle sector, running wide after being caught out by Tsunoda, who was running off track himself.

That interrupted Verstappen, who was not able to improve and remained third behind the all-Mercedes front row.

Fourth went to Perez from Gasly in fifth, while Sainz bettered Ricciardo by just 0.002s to take sixth.

Leclerc ended up eighth with Tsunoda ninth and then Norris, the latter two set to drop to the rear of the grid owing to engine changes.

Indeed, the final grid will be markedly different to the qualifying order with Stroll and Ocon also picking up engine penalties, and Russell a gearbox penalty.