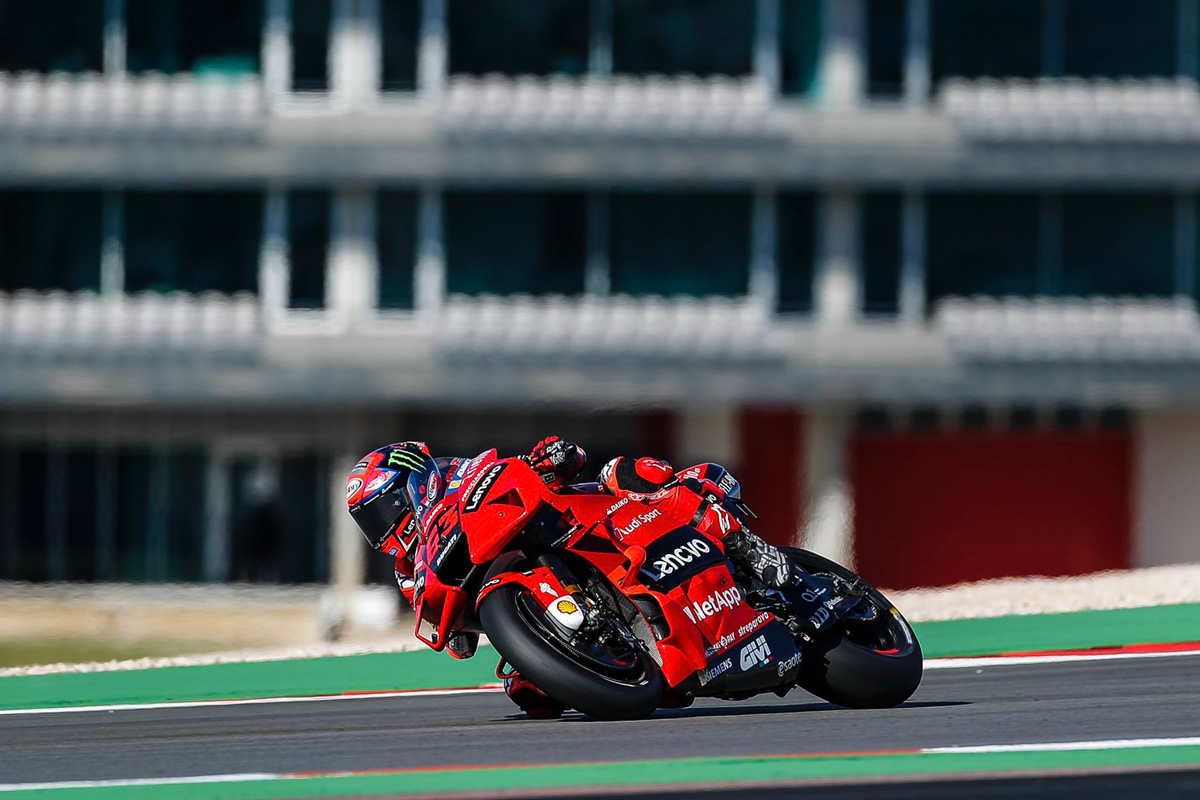 Francesco Bagnaia has extended his MotoGP pole position streak to five successive events with a record-setting lap in qualifying for the Algarve Grand Prix.

While champion elect Fabio Quartararo (Monster Energy Yamaha) was the Friday fast man, Bagnaia (Ducati Lenovo Team) surged to the front in both Saturday practice sessions leading up to qualifying – and maintained that form when it mattered.

Bagnaia’s team-mate Jack Miller had led for a chunk of Q2 before the Italian hit the front with a 1:38.775s two minutes from the end.

The battle was not done yet though, with both riders going faster again.

“We did a really good job this weekend, we worked a lot and everything is perfect.

“[Since] Qualifying from Aragon, I understand how to do the out lap, that helps me a lot to be more competitive in the time attack so I’m very happy.

“For tomorrow, I think the possibility to win is there so we just have to choose the correct tyre and the fight with Fabio, I think [he] is the one with a really good pace, it will be nice to do.”

Forced to settle for second again, Miller was focused on capitalising in the race.

“Another solid Saturday for us but the big goal this week is to finally transfer it over,” said the Australian.

“We’ve had good pace the last few weekends and just haven’t been able to translate it to Sunday.

“Happy with that, happy with the work we have done through FP1 all the way up to Q2, so now it’s just a matter of getting everything sorted, not making any silly decisions like last week, myself and Pecco [Bagnaia], and we should be right for tomorrow.”

Pramac Racing’s Jorge Martin and Johann Zarco were fourth and fifth, the latter having come through Q1 along with Iker Lecuona (Tech 3 KTM Factory Racing) who would secure 10th.

Pol Espargaro was the lead Honda in sixth, in the absence of injured Marc Marquez, while Quartararo was just seventh in the end.

There were two key crashes in qualifying, Luca Marini dropping his bike at Turn 14 in Q2, and Takaaki Nakagami resigned to starting from last after crashing at Turn 5 in the opening segment.

The premier class race at the Algarve Grand Prix will start at midnight tomorrow (AEDT).