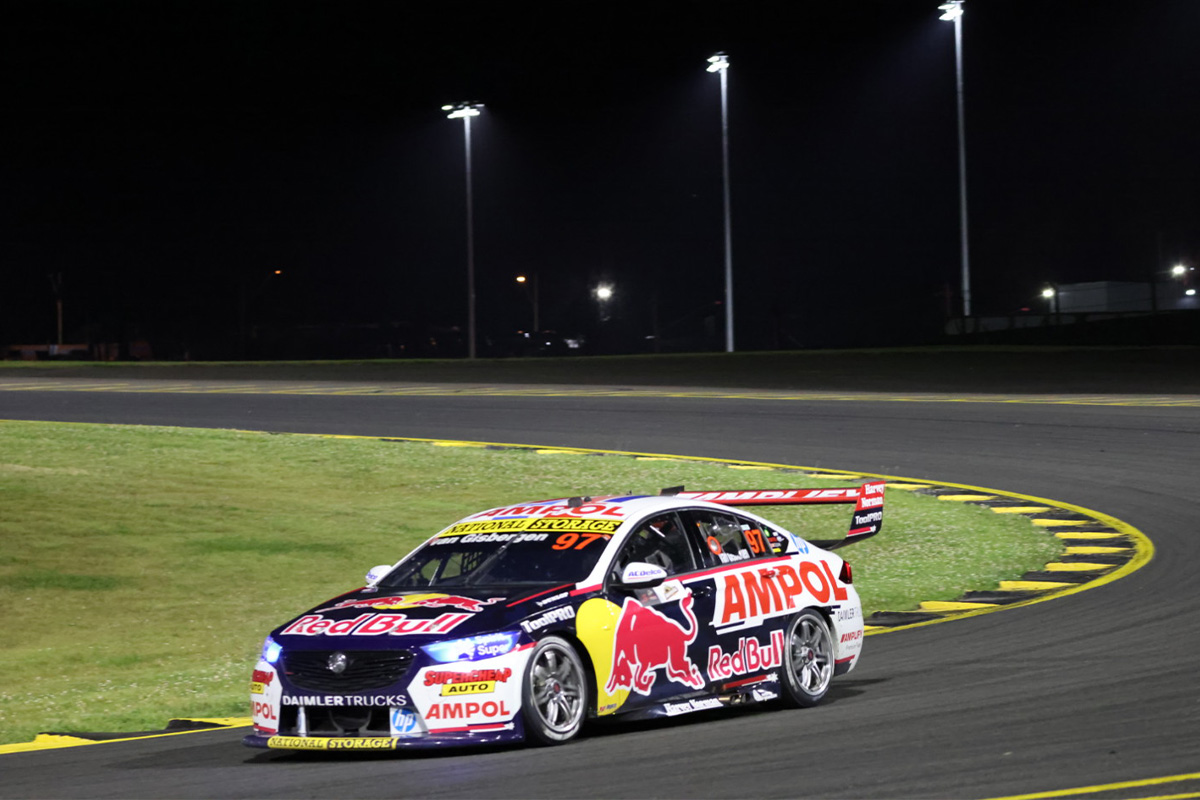 Van Gisbergen would disappear to a 17.0016s victory and therefore extend his championship lead to 346 points over Whincup, who made it a one-two for the Banyo-based team.

Will Davison (#17 Shell V-Power mustang) held off Nick Percat (#8 R&J Batteries ZB Commodore) to complete the podium under the lights of Sydney Motorsport Park, while a promising start turned into a tough night for Erebus Motorsport, which experienced mishaps for both of its entries.

Brown was the early leader but took 11th in the end after a drama in the pits, while Brodie Kostecki got home in 23rd after being pinged for pit lane speeding.

Anton De Pasquale (#11 Shell V-Power Mustang) started last due to a transaxle failure in qualifying and while he drove to 11th at the chequered flag, he would be classified 12th thanks to a five-second penalty for repeatedly exceeding track limits.

Back at the start of the 32-lapper, Brown (#9 Shaw and Partners ZB Commodore) converted his first Repco Supercars Championship pole position into an early lead, despite Whincup’s best efforts to try and hang tough on his outside in the #88 ZB Commodore.

Row 2 starters van Gisbergen and Davison similarly ran side-by-side through the first corner but the latter found himself squeezed over the edge of the track, possibly with a small bump in the process, and dropped to sixth, behind Brodie Kostecki (#99 Boost Mobile Mustang) and Cameron Waters (#6 Monster Energy Mustang).

Jack Le Brocq (#5 Truck Assist Mustang) was highest on the grid of those who started on the soft compound tyres, in eighth, although that was also where he ended the standing lap after a tardy getaway.

Naturally, however, he had speed on those in front who were on hards, and broke into the top five when he went down the inside of Tickford Racing team-mate Waters on Lap 5.

Whincup had tailed Brown by about four tenths of a second for most of the first five laps until he peeled off when the compulsory pit stop wind opened to switch to softs, and Davison did likewise from eighth.

Brown was in from the lead a lap later but an error on the right-front corner required the wheel nut to be replaced and the stop blew out to more than 28 seconds.

Van Gisbergen thus led from the end of Lap 6 until he took to the lane on Lap 12, emerging one position and around three seconds behind Whincup in the battle for the effective lead.

Le Brocq had climbed to second by the time #97 pitted, and when he took his own stop a lap later, he rejoined behind Whincup, van Gisbergen, and Davison, albeit with the slower rubber for the run home.

Brodie Kostecki, who pitted on Lap 7, quickly cleared Le Brocq to move into an effective fourth and was soon harassing Davison, but that came to an end when he was forced to transit the lane again.

He wasted no time in pulling off one of his apparently preferred moves, running Car #97 wide at Turn 11 and then cutting back for the faster run down Brabham Straight.

The two either touched or went very close to doing so, but van Gisbergen was past with 15 laps to go, and would not be headed again once Garry Jacobson (#22 Muscle Car Warehouse ZB Commodore) pitted on Lap 21.

The championship leader was three seconds to the good just five laps after making the pass, and continued to put margin between himself and Car #88.

Whincup therefore took a lonely second, but third was hard-fought for.

Davison had Percat on his rear bar for several laps but managed to keep the Brad Jones Racing driver at bay to claim the final spot on the podium.

Officially, the rest of the top 10 was Tim Slade (#3 CoolDrive Mustang), Waters, Scott Pye (#20 DeWalt ZB Commodore) from outside the top 20 on the grid, and Bryce Fullwood (#2 Mobil 1 Middy’s ZB Commodore).

Chaz Mostert (#25 Mobil 1 Appliances Online ZB Commodore) was another who incurred a time penalty for track limits breaches and ended up 13th in the final wash-up.