Quartararo throws down the gauntlet at Algarve

Quartararo throws down the gauntlet at Algarve 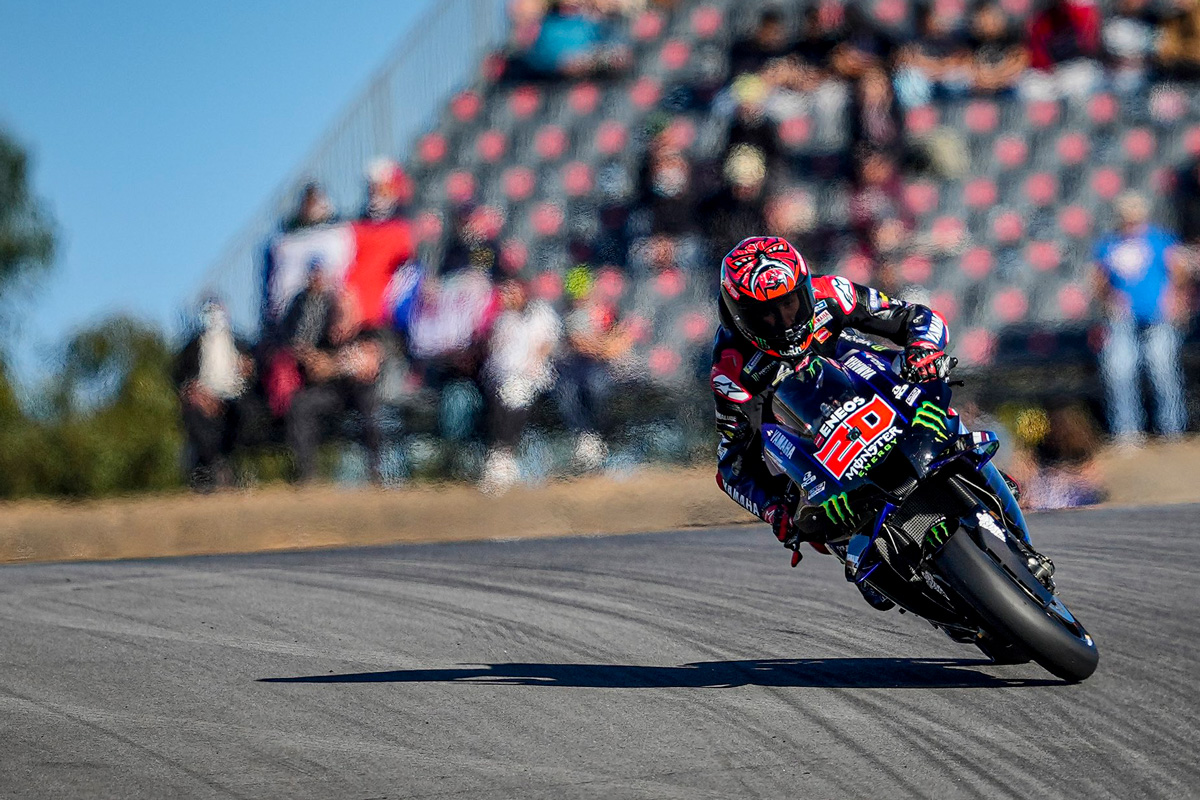 Fabio Quartararo has blitzed the field on the opening day of the Algarve Grand Prix, in a show of intent that there’ll be no easing off now that he’s secured the 2021 MotoGP title.

The Frenchman, whose status as world champion was confirmed when Francesco Bagnaia crashed out of the Emilia Romagna Grand Prix last month, ended the day more than a tenth clear on combined practice times.

It was Bagnaia who came closest to the benchmark 1:39.390s set in the second of two sessions, with the Ducati Lenovo Team ace 0.132s adrift.

Quartararo (Monster Energy Yamaha) spoke of his ability to enjoy attacking the Portugal circuit without any title implications to worry about.

“I enjoyed today’s sessions a lot, because the last two race weekends were more about stress and not making any mistakes than about enjoyment,” he said.

“Now I’m enjoying riding so much again. Even in the time-attack it’s been a while since I was able to get that feeling of being on the limit. I was really enjoying it. It’s nice to battle for first in the timesheets with Pecco [Bagnaia].

“Sunday is the most important, but it’s nice to see the two most competitive riders of the second half of the season fighting.

“For today, we had planned to try the medium and the hard tyres, but because of the wind it was quite difficult to adapt myself properly, so we need to do it tomorrow instead.

“Other than that, we wanted to try a few things on the bike, but to be honest the most important thing was to be back after Misano and check my riding, and I think it was quite okay.

“The triple crown is not just in my hands, so instead my target this weekend is to fight for the race victory and then we will see what happens, also concerning the team and constructors’ title.

“We need to at least try to win to secure the triple crown.”

Miller also noted wind had played a factor in his day.

“I’m thrilled to be back here at Portimao: it was a positive Friday for us, and I hope we can continue like this until Sunday,” said the Australian.

“The bike is working well, and I felt comfortable right from the start.

“This morning we tried the medium tyre while in the afternoon, we lapped on the hard tyre, then we mounted the soft in the final minutes and tried a time attack.

“Unfortunately, compared to the morning, I struggled a bit more in FP2 because of the wind, but it seems that tomorrow and Sunday, the conditions will be better.

“The main focus for Saturday will be to continue to work on the race pace and try to stay in the top ten in FP3 to aim for a good grid position for the race.”

That came despite being involved in a late crash with Marcos Ramirez (American Racing) at the final corner.

Gardner can seal the Moto2 world championship this weekend if he scores eight points more than Fernandez.