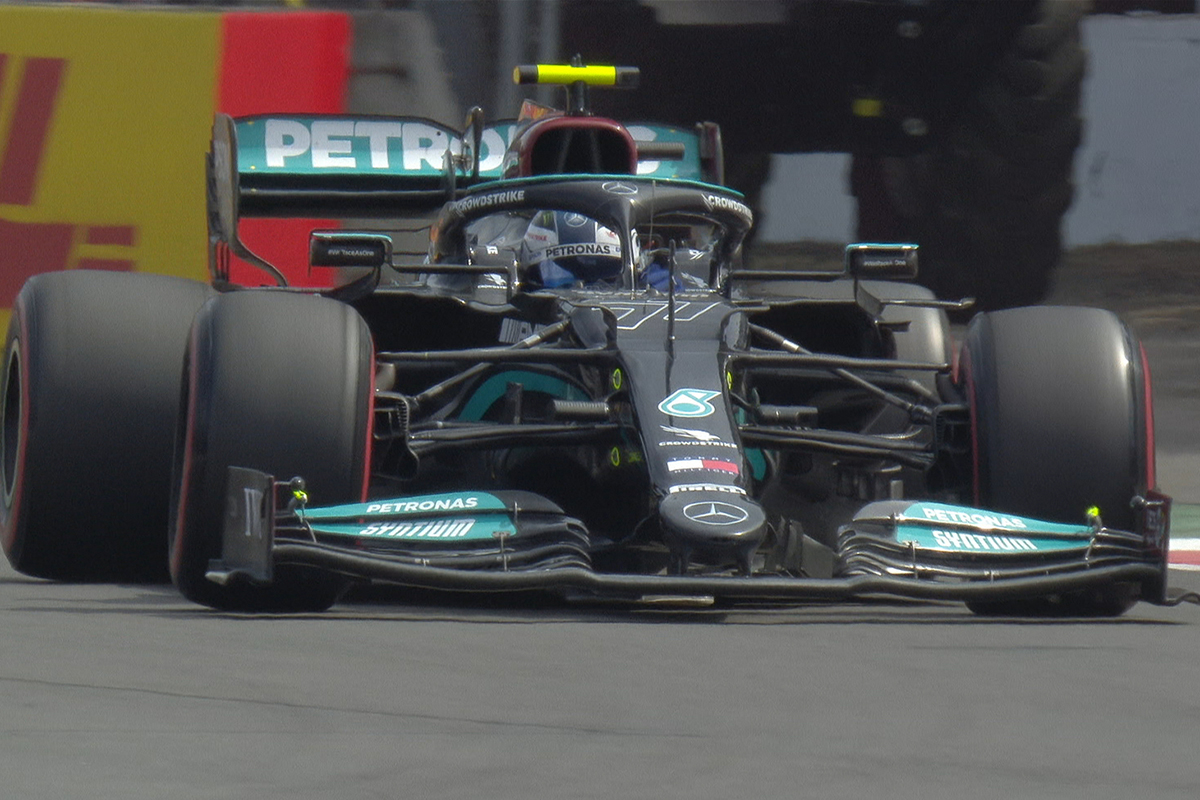 A dusty circuit greeted drivers with plumes of dirt trailing cars reminiscent of the spray in wet weather.

Mercedes saw Bottas set the early pace, his 1:21.327s coming on a set of soft tyres, leaving him 0.2s clear of team-mate Hamilton on the same compound rubber.

There was a mixture in use, McLaren splitting Lance Norris on softs and Daniel Ricciardo on mediums, while Max Verstappen had hard tyres on his Red Bull.

Charles Leclerc had a messy start to the session, running wide on entry to the stadium section before a spin a few laps later exiting the complex resulted in a broken rear wing.

No sooner had he returned to the pits that Perez made the same mistake – losing control on turn in to the right-hander which rejoins the circuit to the original Peraltada corner.

While Leclerc escaped with comparatively minor damage, at Red Bull half the wing was missing.

A short Virtual Safety Car was called for to clear debris before green flag running resumed.

Pierre Gasly went fastest with a 1:20.316s, a full second faster than Bottas’ early effort to highlight the track evolution.

The braking zone for Turn 1 proved a difficult spot for the two Mercedes drivers.

Hamilton snatched a brake before bouncing over the grass, Bottas putting flat spots on his fronts after his own incident.

A bollard at Turn 3 is the defined rejoin point for drivers who’ve missed the apex at Turn 2, by not doing so Hamilton will be investigated post-session.

For a time, Perez’s session looked to have ended early as a result of his early transgression, the Mexican climbing from his car as it was placed on stands and work was carried out on the RB16B.

However, he was soon refitting his helmet ahead of stepping back into the car and returning to the track with 30 minutes to run.

Times continued to tumble, Hamilton dropping the running to a 1:19.781s.

A fast lap attempt from Hamilton saw him record a 0.1s to his team-mate, moments before Verstappen banked a 1:18.464s to shoot to the top.

Gasly was fifth best ahead of Sainz, Fernando Alonso, Leclerc, Esteban Ocon, and Sebastian Vettel rounding out the Top 10.

Ricciardo was only 14th best, one spot up on Norris, the field spread by 4.478s front to back, Nikita Mazepin propping up the list.