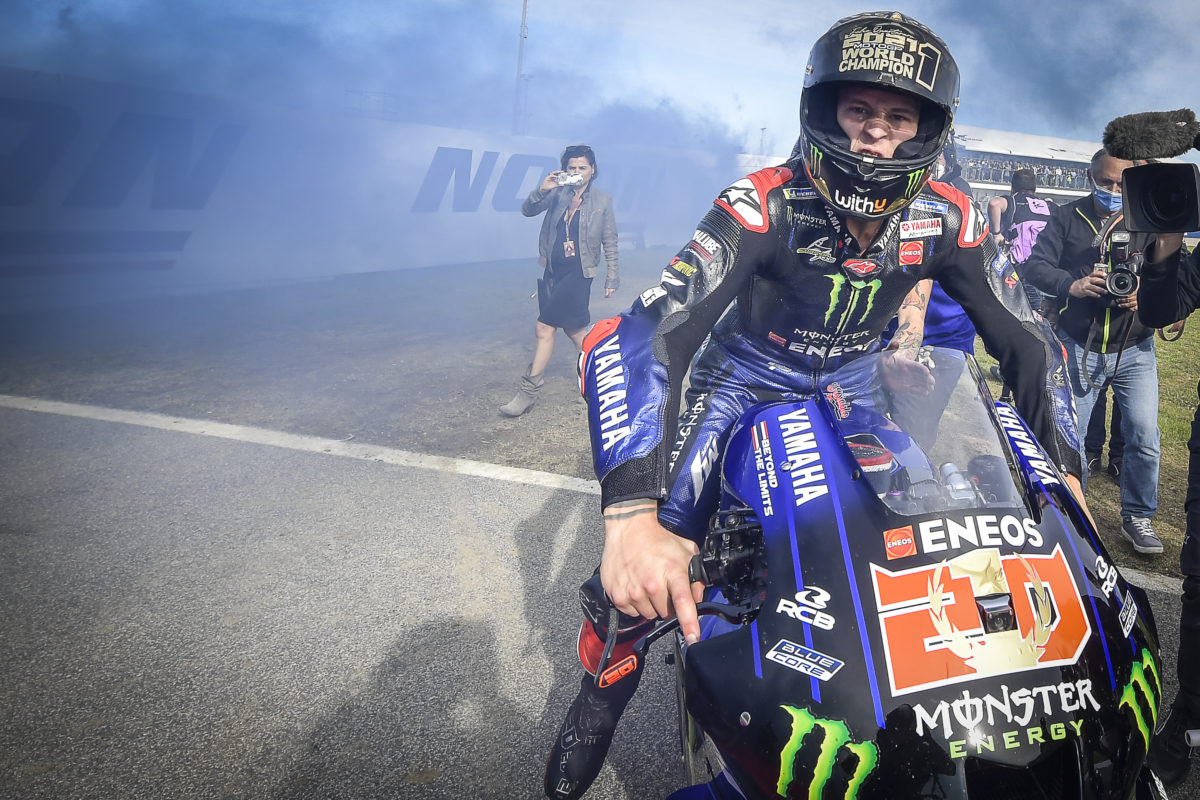 Fabio Quartararo celebrates after winning the championship at Misano

Fabio Quartararo says that his status as a MotoGP champion is “finally sinking in” as he readies himself for the first round since he sealed the title.

The Monster Energy Yamaha rider took an unassailable lead in the standings when he finished fourth last time out in the Emilia Romagna Grand Prix and Francesco Bagnaia failed to make the chequered flag.

MotoGP then had a weekend off before its return to Portimao for the second-last round of 2021, the Algarve Grand Prix, where Quartararo will feel like a champion.

“It took a bit of time, but winning the 2021 MotoGP World Championship is finally sinking in,” said the Frenchman.

“Now that I no longer have to think about the standings and points all the time, I can go back to the mindset we had when we came here earlier in the year.

“Our goal is to be first again, as it was at the start of the championship, because we still have the team and the constructor title to fight for.

“We did an amazing race at this track at the Portuguese GP. The pace was so fast, so I‘m very curious to see what we can do this weekend.”

Quartararo won the Portuguese Grand Prix in April, his second of five victories so far in 2021.

While his own title is now secure, the teams’ and constructors’ championships are likely to go all the way to the final race at Valencia, later this month.

Monster Energy Yamaha turned a two-point deficit into a 13-point lead in the last round, when the Ducati Lenovo Team had a disastrous Sunday which not only featured Bagnaia’s crash while leading, but also Jack Miller’s while running in second.

However, Ducati is still on top of the constructors’ standings by 12 points thanks to Esponsorama Racing’s Enea Bastianini, who finished third at Misano.

Yamaha factory team director Massimo Meregalli said, “We are heading to Portimao still on cloud nine for Fabio. But there‘s still work to be done.

“We want to get the best results possible and after that brilliant win of Fabio at this track in Round 3, we are feeling confident that we can be there at the front again this time.”

Franco Morbidelli rode for SRT last time MotoGP was at Portimao, but his start to life at the factory squad has been difficult due to his recovery from knee surgery.

“Franky has also always been a high scorer at this circuit. But obviously he is still recovering from his injury,” noted Meregalli.

“We will have to see how this rather unique circuit will affect his knee. But either way, we are eager to get to work and bring our best.”

Morbidelli himself added, “The Emilia Romagna GP weekend was positive for us overall. We made a good step to improve the feeling with the bike, and my pace at the start of the race was good.

“The condition of my knee is improving week by week, so steadily we are seeing progress.

“Portimao could be a challenge though.

“I don‘t know how physically demanding this track will be, especially considering the elevation changes, but I do always enjoy riding at this track, so I‘m looking forward to it.”

Morbidelli finished second in the 2020 championship but is currently 17th in the standings, in part due to missing five rounds due to injury.