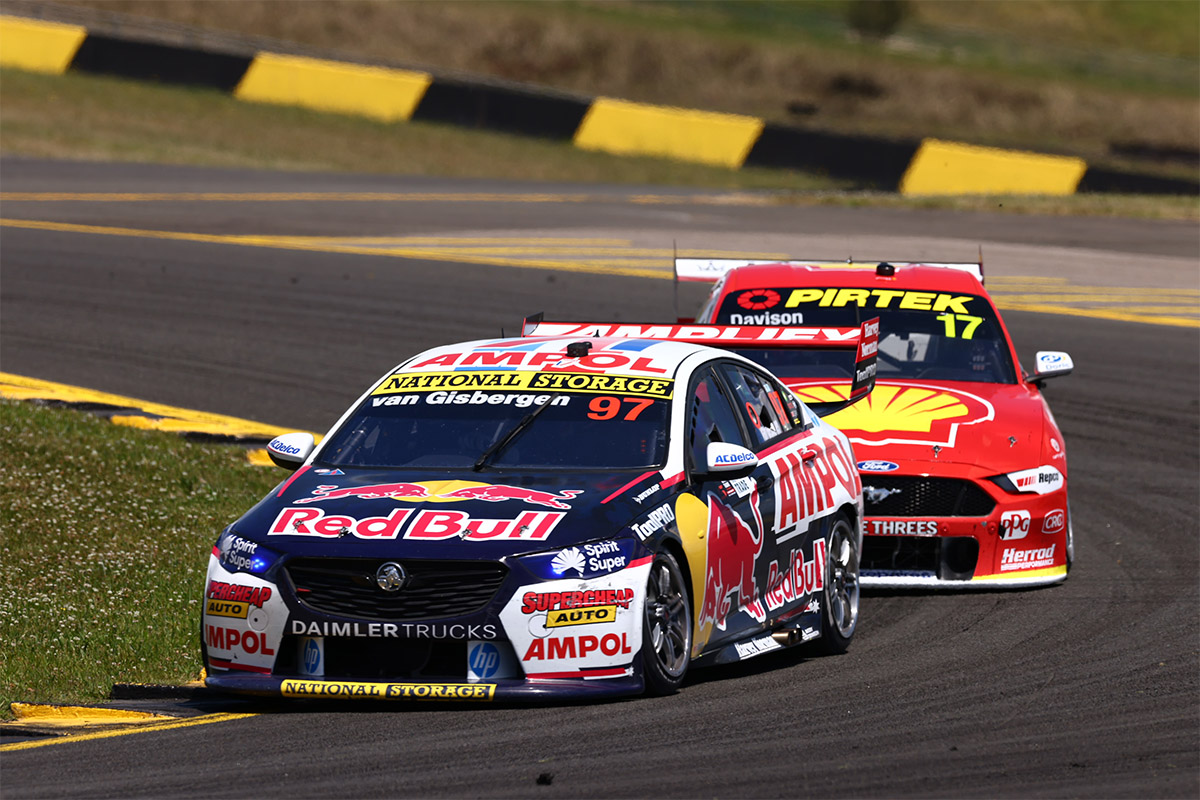 Shane van Gisbergen has won Race 21 at Supercars’ Bunnings Trade Sydney SuperNight after Will Davison struck trouble in the form of electrical gremlins.

Davison led through his opening stint of the 32-lap encounter at a sunny Sydney Motorsport Park but was jumped by van Gisbergen in the pits when the Shell V-Power Racing Team had to power cycle the #17 Mustang.

He would still challenge the #97 Red Bull Ampol Racing ZB Commodore in the latter stages and eventually took the chequered flag in second position, with Brad Jones Racing’s Nick Percat completing the podium in the #8 R&J Batteries ZB Commodore.

Pole-sitter Anton De Pasquale got home in fifth in the other Shell V-Power Mustang, one spot behind Erebus Motorsport’s Brodie Kostecki (#99 Boost Mobile ZB Commodore), after a tardy start.

Brodie Kostecki also picked up the five fastest lap bonus points while van Gisbergen’s lead in the Repco Supercars Championship is out to 348 points after his team-mate, Jamie Whincup, finished seventh.

“We had a bit of luck obviously with whatever dramas they had but perfect pit stop by the Red Bull Ampol Racing boys and got out in front,” said the victorious New Zealander.

“Had to make some passes; again, had a pretty fun first lap racing with the guys and that set the race up.”

On his ever-growing margin atop the points table, van Gisbergen said, “We do have a big lead but it’s not done yet.

“We have to make sure everyone knows we’re here to win races and not just collect points.

“There’s a long way to go before we start thinking about that, so I’m here to have a crack.”

De Pasquale (#11 Mustang) had topped all seven prior sessions this weekend but bogged down when the lights went out for Race 21, giving Dick Johnson Racing team-mate Davison (#17 Mustang) a clear run to Moffat Corner (Turn 1).

The vigour continued as Brodie Kostecki attacked Davison, and van Gisbergen (#97 ZB Commodore) looked for an avenue around Whincup as they ran around the back of Corporate Hill.

Van Gisbergen did manage to round up the #88 ZB Commodore with the pack bunched, then got down the inside of Car #99 into the final complex of corners to sit second at the end of the standing lap.

Davison stretched his advantage over #97 beyond two seconds on Lap 7, with Brodie Kostecki another second-and-a-bit further back, and Whincup still holding fourth spot.

De Pasquale continued to circulate in seventh until he stopped for a fresh set of working side tyres on Lap 8, before Davison’s lead briefly edged over three seconds on Lap 14.

However, it soon emerged that the #17 Mustang had developed an electrical issue, specifically around the CAN bus, which would had taken out the dashboard and would require a power cycle at its compulsory pit stop.

When van Gisbergen followed Davison into the lane on Lap 15, that would prove a pivotal moment in the race.

Firstly, the erstwhile race leader apparently had no speed limiter and hence had to leave a margin for error which allowed van Gisbergen to scrounge some time at 40km/h.

Secondly, DJR opted for four tyres for #17, presumably making use of the extra dwell for the power cycle, while Triple Eight changed only three for #97, and van Gisbergen was able to sneak in front of Davison when they re-entered the fast lane.

However, with De Pasquale having already pitted, van Gisbergen still had a red-and-white Mustang up the road from him, and an even earlier stopping Tim Slade (#3 Dayco Mustang) also ahead.

When the cycle completed, it was thus De Pasquale in first position, from Slade, van Gisbergen, Davison, Brodie Kostecki, Brown, Percat, and Whincup in eighth.

Van Gisbergen, Davison, and also Brodie Kostecki made light work of Slade on Lap 20, and the championship leader would then quickly wipe out most of the two-second margin which De Pasquale enjoyed at that time.

On Lap 23, De Pasquale ran wide at Turn 2 and van Gisbergen put Car #97 into the gap, making contact before driving on by.

The man in #11 immediately fanned the throttle to release his team-mate, giving Davison the opportunity to stick with van Gisbergen, and stick with the Triple Eight driver he did.

Only tenths of a second separated them for the next several laps before van Gisbergen stretched the gap to 1.0s at the start of the final lap, and would drive on to his 12th win of season 2021.

Officially, the margin over Davison at the chequered flag was 1.9107s, while Percat prevailed in an entertaining battle for the final podium position.

De Pasquale was still holding third spot when, just behind, Brodie Kostecki pinched a brake at Turn 8 on Lap 29 and let Percat through.

Percat then went down the inside of De Pasquale on the following lap at Turn 6, and Brodie Kostecki also overtook Car #11 on the penultimate lap.

That meant Car #99 in fourth and De Pasquale home in fifth, ahead of Slade, Whincup, Mostert, Heimgartner, and Reynolds.

Todd Hazelwood (#14 Dunlop Super Dealer ZB Commodore) took 11th and Brown, who started the race with rubber he had used the night before in Race 20, finishing 12th.

The event concludes with Race 22 from 16:25 local time/AEDT.