De Pasquale staves off Brown to win Race 22 at SMP

De Pasquale staves off Brown to win Race 22 at SMP 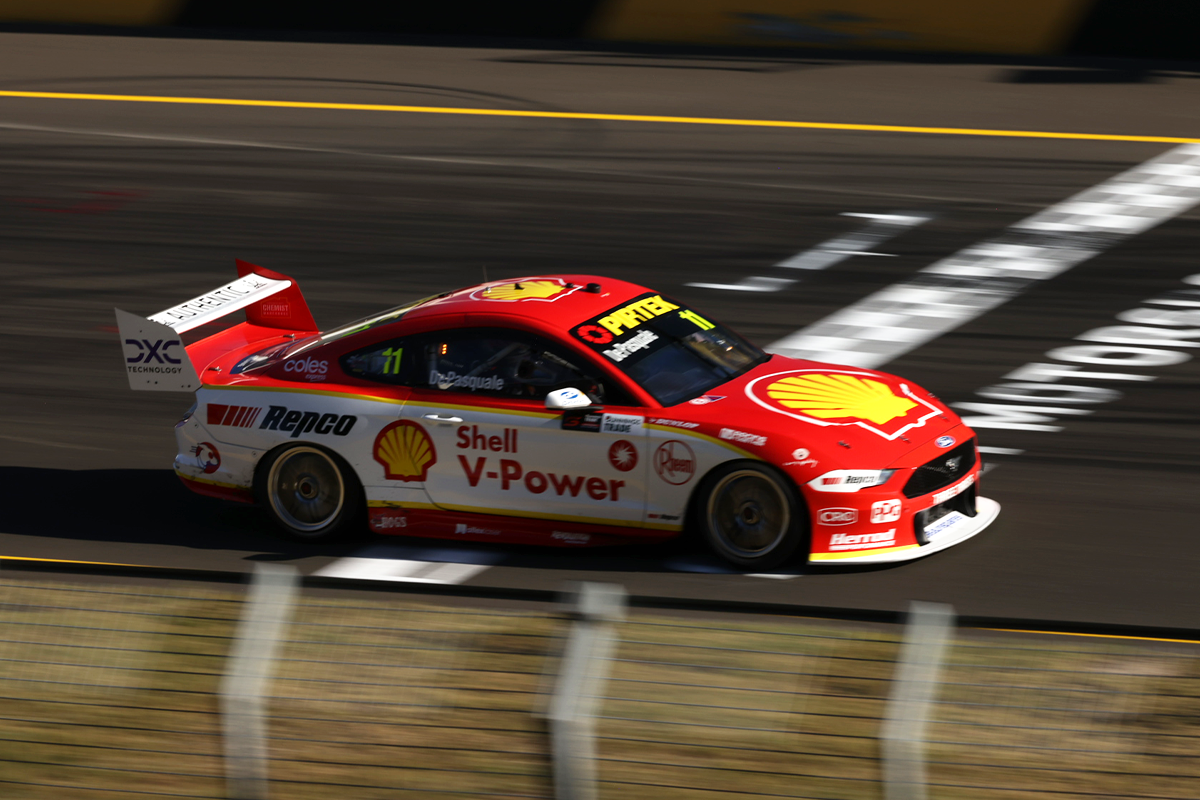 Anton De Pasquale has won Race 22 of the Repco Supercars Championship at the Bunnings Trade Sydney SuperNight after seeing off a late challenge from Will Brown.

De Pasquale effectively led all 32 laps in the weekend finale at Sydney Motorsport Park, bouncing back after his #11 Shell V-Power Racing Team entry was disqualified from Race 21 due to a tyre mix-up.

As it was near the end of the race, it was tight at the start between the #11 Mustang and Erebus Motorsport’s #9 WD-40 ZB Commodore.

De Pasquale and Brown shared the front row and made fairly even getaways once they got into the secondary launch phase, before the latter had to tuck in behind at Moffat Corner (Turn 1).

De Pasquale was more than a second to the good after two laps, and doubled that margin after another two, by which time Chaz Mostert (#25 Mobil 1 Appliances Online ZB Commodore) had overtaken Percat for sixth.

The pole-sitter was 3.4s clear of second-placed Brown on Lap 10, but only 2.5s up as he pitted a lap later, and it would be revealed that there had been a significant delamination on the outgoing right-rear tyre on Car #11.

He nevertheless emerged first of those who had pitted at that point, ahead of Davison, an early-stopping Tim Slade (#3 Dayco Mustang), and van Gisbergen, who had followed De Pasquale into the lane.

Van Gisbergen quickly cleared Slade, before Brown pitted from the official lead and Whincup from second position on Lap 16.

Brown got out just ahead of van Gisbergen and managed to hold #97 off, before passing Davison later that lap.

When Jack Le Brocq (#5 Truck Assist Mustang) pitted on Lap 17, the cycle was done, and it was De Pasquale in the lead from Brown, Davison, van Gisbergen, and Whincup.

Van Gisbergen and Whincup soon both got by Davison, while Brown was rapidly eating into a De Pasquale lead which had at one point been almost 10 seconds, despite both undertaking four-tyre stops.

The gap back to Car #9 was barely more than a second with six laps to go, and they were nose-to-tail with four laps to go.

However, De Pasquale had left something in reserve, and manage to rebuild his gap over Brown to 0.9s with a single lap remaining, before taking the chequered flag with a margin of 1.2621s.

Along the way, he also set the fastest lap, a 1:31.0693s on Lap 2, meaning an extra five championship points into the tally.

“Will was pushing me quite hard,” said De Pasquale.

“The idea, I had a bit of tyres in hand so I pushed quite hard for the first one and then one of the tyres delaminated or something.

“So, I sort of had to pit quite early and then do a really long stint, which we didn’t want to do but in the end it worked out alright.

“I knew Will was coming so I saved a little bit of tyre for the battle, because I knew it was going to happen, so lucky to come through. It was good.”

While Whincup appeared to have held up van Gisbergen in the opening stint, the roles were reversed after their stops, with #88 tailing #97.

Whincup made his way by with a touch over eight laps to go, and would remain third thereafter, albeit finishing more than 19 seconds behind Brown.

Van Gisbergen still leads the championship by 338 points after finishing fourth, one position ahead of Davison.

Cameron Waters (#6 Monster Energy Mustang) climbed to sixth from 12th on the grid and team-mate Le Brocq made it two Tickford Racing entries in the top 10 by finishing eighth.

They were split by Walkinshaw Andretti United’s Mostert, with Slade getting home in ninth and Mark Winterbottom (#18 Irwin Tools ZB Commodore) rounding out the top 10.

Todd Hazelwood (#14 Dunlop Super Dealer ZB Commodore) finished three laps down in 23rd after picking up steering damage in some especially willing racing on Lap 1, while Fabian Coulthard (#19 Local Legends ZB Commodore) was the only DNF after suffering a transaxle issue.

The Supercars Championship remains at Sydney Motorsport Park for the Armor All Sydney SuperNight next weekend (November 6-7).