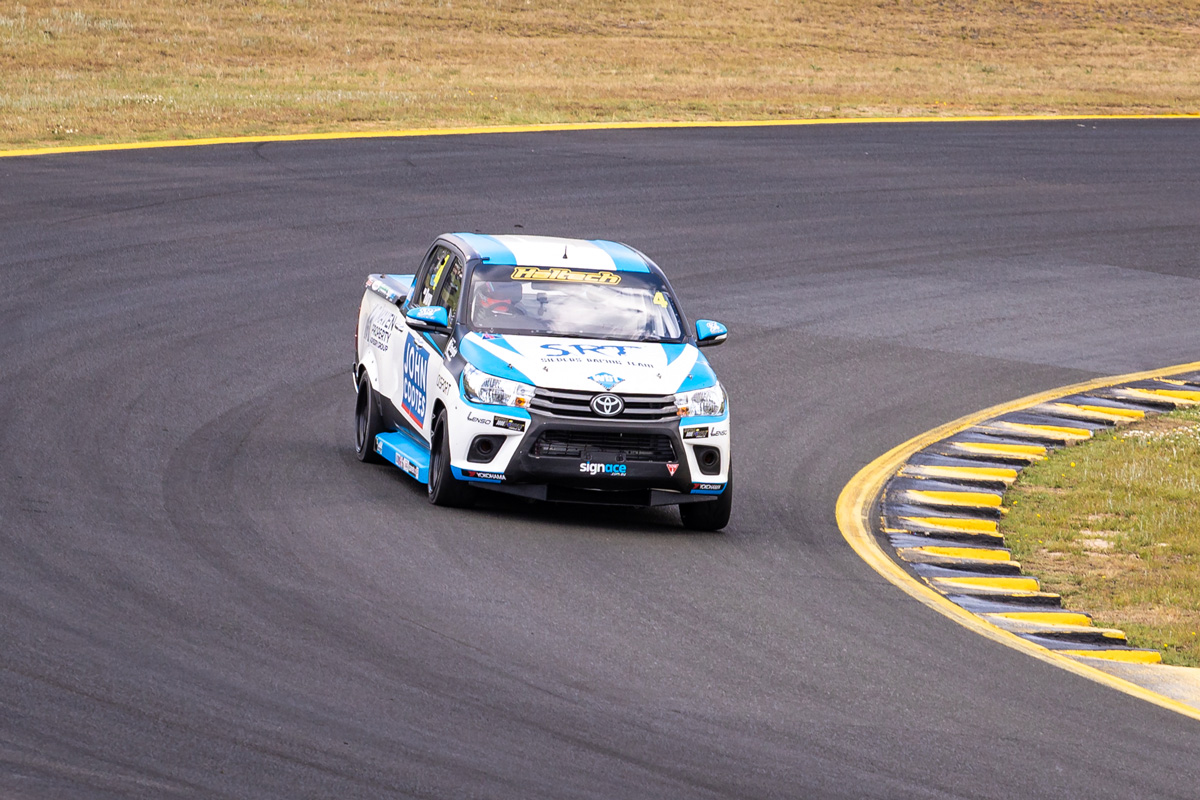 Aaron Borg has capped a fine weekend in the Haltech V8 SuperUte Series at Sydney Motorsport Park by taking out the third and final heat.

After placing runner-up to Cameron Crick in the opening race of the weekend yesterday, Borg navigated Race 2 carnage this morning to take his second victory of the V8 SuperUte era.

He then backed that up in Race 3, converting pole position into another win.

This time it took just two corners for trouble in the pack to break loose, with Craig Woods locking up into the hairpin and clattering Ryal Harris on the outside – the pair going from battling for second to being off the road.

Gerard Maggs took full advantage to grab second, although Mitsubishi duo David Sieders and Crick would both pass him in the early corners of Lap 2.

The top three would remain unchanged from that point, despite Sieders pushing Borg all the way to the end, finishing merely 0.307s behind after nine laps.

“It was a good pressure race between Dave and I. He was very fast at the end and I couldn’t afford to make any mistakes. We learned some lessons about tyre strategy which we’ll implement for the next round in a couple of weeks,” said Borg.

“Overall, it was a great weekend for the category, we showed everyone how entertaining SuperUte racing can be.”

Harris recovered to fourth to complete a frustrating weekend for the ute racing legend.

“The Utes needed a weekend of exciting racing and we certainly gave that to the fans,” said Harris.

“In the last race, I had no fourth gear at all so it’s a bit of a miracle I still managed to finish second for the weekend. Unfortunately, we’ve given away a lot of points to Aaron in the championship.”

Jaiden Maggs, Chris Formosa and Richard Mork were fifth through seventh; the only other drivers on the lead lap.

Gerard Maggs’ strong start was brought unstuck by an issue that left him to be classified as a non-finisher, while Michael Formosa was forced to park his #94 Ford Ranger in the closing stages.

Meanwhile, Woods and Matt McLean were both forced to spend time in pit lane, the latter making his unplanned stop after struggling to get his car off the start line.

The Haltech V8 SuperUte Series will next be in action in a fortnight’s time, again at Sydney Motorsport Park, across November 13-14.