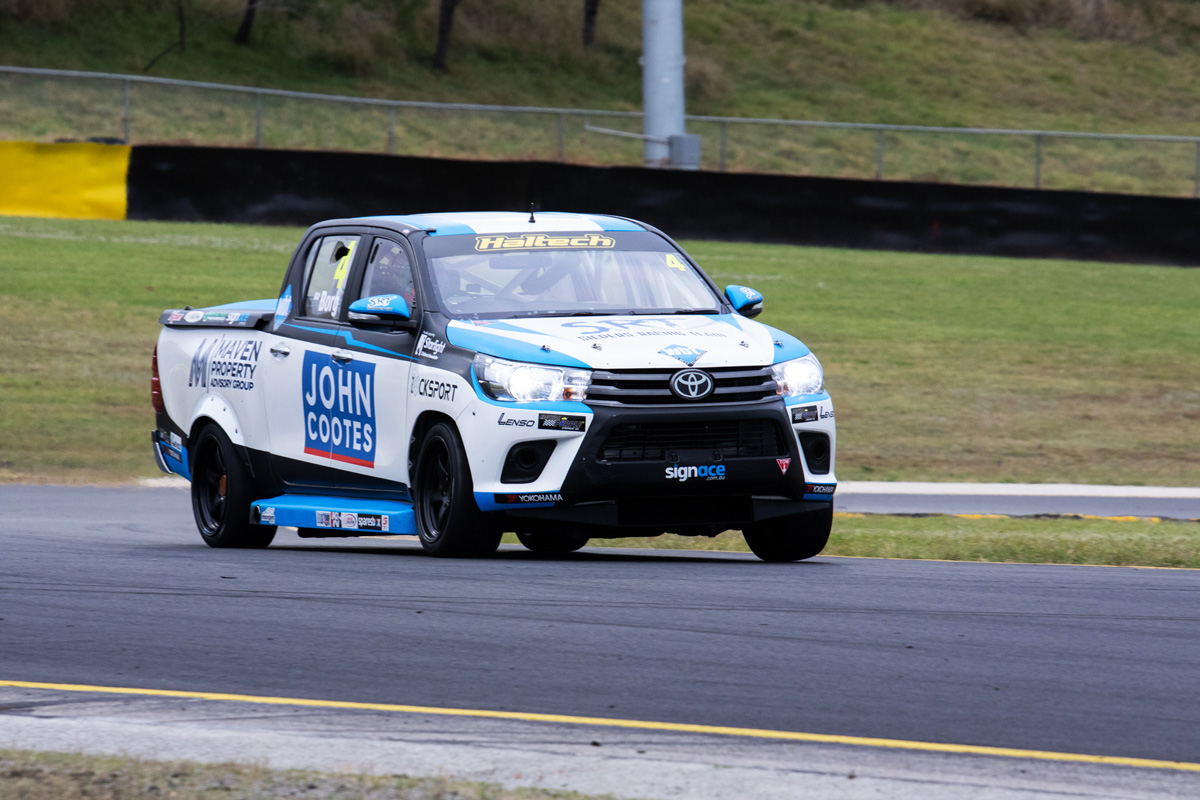 Aaron Borg has capitalised on his rivals tripping over each other to take victory in an incident-filled Race 2 of the Haltech V8 SuperUte Series at the Bunnings Trade Sydney SuperNight.

Borg, who started on the third row of the reverse top six grid following his second-place finish yesterday, found early trouble when he ran wide while trying to hang around the outside of Craig Woods on the opening lap.

That dropped him back to sixth, but he’d find himself in the lead just three laps later thanks to a series of aggressive exchanges ahead.

Having both jumped pole-sitter Woods off the start line, David Sieders and Ryal Harris engaged in some door-banging as they went side-by-side through a chunk of the second lap.

Ultimately Harris lost out, forced wide at Turn 7 – although Sieders would then be required to pit with a flat front-right tyre.

That put Woods into the lead, only for Harris to reclaim the ascendancy on the very next lap.

They all made it through the fast left-hander, but Turn 7 was the tipping point once again, with contact between Harris and Crick sending both cars spinning out of the lead.

With Matt McLean having to take some neat evasive action, the door was left wide open for Borg to move into first – and he’d not relinquish the position from there.

“That was a fun race, it was great to have the utes going back to the good old days of rubbing and a bit of rough and tumble,” said Borg.

“I managed to avoid the crashes, especially the one at Corporate Hill where Ryal and Cameron spun; from there, I was just trying to drive straight and look after the tyres.

“We’ve got some good tyres left for Race 3, which puts us in a strong position.”

McLean came home second: “That was one of the most enjoyable races of my life.

“We were still having some clutch issues, which is why I was so slow off the line, but the race was so much fun.

“Unfortunately when Ryal and Cameron spun at Corporate Hill, I had to go to the outside which allowed Aaron to get past me.”

Third-placed Jaiden Maggs added: “That was my first ever podium in a Supercars support category, so I’m stoked.

“It’s a bit unfortunate that everyone crashed in front of me, but I’ll take it!”

Woods recovered to fourth, ahead of Gerard Maggs, Richard Mork, Harris, Craig Jenner, Michael Formosa and Sieders in 10th. Crick and Chris Formosa did not finish.

The third and final SuperUtes race of the weekend will start at 14:55 local time/AEDT.